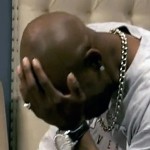 See, I really thought this was gonna be his breakthrough. It’s the first movie where he does not have a co-star of equal or greater “star power.” He is the main attraction. And at the same time it is not some Hollywood action vehicle that the Rock or somebody turned down, it is an independent crime movie based on a novel by the legendary black crime writer Donald Goines. Also it’s directed by the sometimes decent director Ernest Dickerson, who has some credibility because he used to be Spike Lee’s cinematographer. Also because I kind of liked BONES. 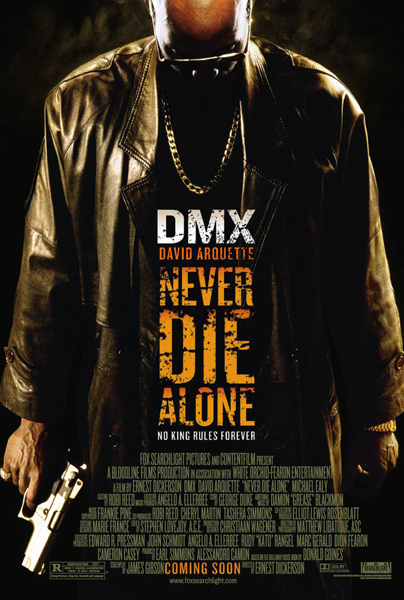 But my friends I am sorry to report that NEVER DIE ALONE does not work. And I will try to explain why. Because that’s what I do.

DMX plays King David, a drug dealer with what you might call a pretty poor attitude towards other human beings, especially the ladies. In the opening scene, he is dead in a coffin and narrating about his life. “The Hindus have a word for it… ‘karma.'” Oh, thanks for introducing that exotic new concept to us there bud. Then it goes back to two days earlier and I was ready to see a thrilling story about the last two days before this guy got killed.

At first it’s pretty interesting. He’s just returned to New York after many years, and he has hair on his head that’s supposed to make him look old. He wants to “quit running from his past” so he decides to pay back some money he owes to this guy Moon (Clifton Powell). There’s some good dialogue and I like the part where Moon sees in his book that David owes him $8,000, then lies and tells him he owes $15,000 plus interest. David says, “That sounds fair” and rounds it up to $30,000! Just to fuck with him! There’s alot of good dialogue and tension in this setup where you meet two of Moon’s guys, one of them with a scar on his face and a mysterious lifelong grudge against David. And Moon asks him to go collect the money and nothing more. So you know there’s gonna be some stabbings or shootings or something.

And pretty quick the shit hits the fan. Yes, you get your stabbings and your shootings. David and some other people end up dead. A car window gets punched out, which is a personal favorite of mine. A school girl gets shot and flies ten feet across a parking garage. And you see some of the other bad motherfuckers that work for Moon, including the great Tommy “Tiny [Zeus]” Lister. There’s also a joke about Tupac coming back from the dead, which is weird because Ernest Dickerson directed Tupac in his first movie role, JUICE.

So far so good, but I seem to remember that at the beginning DMX was dead and was going to narrate the story of how he died. And now he already died and the movie is just starting. What the fuck are we gonna do now, watch his body rot?

Well no, now it turns out the story is actually about how David Arquette is a writer who is interested in black culture. We know this because he has Miles Davis, John Coltrane and the Wu-Tang Clan on his wall. But also because his girlfriend points it out explicitly, for those of us who are retarded. And he happens to be there when King David gets shot, and, being one of the more “good” type Samaritans, drives him to the hospital. That’s when King David dies, but it’s the thought that counts, so Arquette ends up inheriting King David’s money, his jewelry, his pimped out ride, and a bunch of tapes that were the King’s memoirs. So this scene is basically telling you “For now on DMX will not be narrating from the dead, he will be narrating from some tapes he made before he was actually dead. DMX regrets the error.”

This is where the movie totally falls apart. It goes into the story of some of King David’s relationships, how he tricked women into snorting heroin, and turned the cast of a Baywatch-type show into junkies. Alot of the drug shit is really over-the-top, turning these supermodel type actresses into hags with monster makeup on. For those of us who haven’t heard about DRUGS = BAD SHIT. But I guess that sort of fits Goines’s style. I haven’t read this particular book, but the overall feel of the picture reminds me of the sort of corny but gritty feel he sometimes has.

Well, I gotta admit, I am no expert on this dude. I have only read Daddy Cool, and based on that I prefer Iceberg Slim (who inspired Goines to write about what he knew – heroin, pimps, hustlers, and more heroin). But watching this movie makes me want to just go read the book, because I’m sure it is less convoluted, and at the same time it’s gotta have more meat to it.

The problem with the movie is it seems like this is going to be one of those great rise and fall of an anti-hero type stories, like Scarface, Carlito’s Way, Belly, or ten thousand other entertaining movies. But the story is over before it really starts, and even what little piddly amount of story is there keeps losing its momentum by cutting back to Arquette listening to the tapes and writing the shit down.

It is a kind of complicated story because it also has to show how the other characters, like the guy with the scar, tie into the flashback story of King David and what happens when they track down David Arquette in the present, driving the dead man’s car. But there’s just not enough going on in the flashback to have much impact when it all connects together at the end.

To make matters worse, there is a horrible score by George Duke. I know the motherfucker is a professional musician and everything and if I remember right he has played good music before. But he ruined any chance the movie had at working. In the beginning, he porns the shit out of every scene. DMX can say some tough lines but he’s not gonna seem all that badass if there is some goofball constantly piddling around on a horn on the soundtrack. I mean, let’s have some quiet time here, George Duke. I think they wanted Curtis Mayfield but instead it sounds like they got Kenny G’s marginally more soulful black golf buddy. And then later on the shitty jazz fusion drops away and is replaced by a really corny “dun dun DUN!” type keyboard score. The only other movie I’ve seen based on Donald Goines was a really terrible straight to video movie that I couldn’t even get half way through. This one seemed more like a real movie, but they might as well have lifted the music right off of the straight to video one. I honestly think the movie would’ve worked better if there was no music in it at all.

On the positive side, this is an Ernest Dickerson picture so some of the photography looks really beautiful. Even if there are too many showoffy camera angles.

It’s really too bad. If they would’ve done a better job on this script and pretended they weren’t home when George Duke showed up to record, they might’ve had something there. They had the right cast, the right basic plotline and a few gritty scenes. But whatever they were trying to do, they didn’t end up giving DMX much better to work with than they did in his moronic mainstream buddy movies. Oh well, maybe he did better in that go-cart movie. I’ll have to watch that one.

Also it was good because I got to see trailers for alot of movies that they don’t put before the white people movies. I found out about new movies starring Bernie Mac, Cedric the Entertainer with Steve Harvey, and another one with D.L. Hughley. That’s all the Original Kings of Comedy!

DMX Donald Goins Ernest Dickerson
This entry was posted on Friday, March 26th, 2004 at 12:55 am and is filed under Action, Crime, Drama, Reviews, Thriller. You can follow any responses to this entry through the RSS 2.0 feed. You can skip to the end and leave a response. Pinging is currently not allowed.