“Well, maybe you can get me in a remake. Mr. Bay does remakes all the time.”

“Fine fine fine. But can Jason Statham be in it?”

“I thought you said kung fu?”

“Karate is from Japan, dad. Kung fu is from China. Didn’t you get tutored at all when you were a kid?”

“Well, it was the title of a Grammy winning song by the forgotten novelty rappers Jazzy Jeff and the Fresh Prince.”

“And to think I was gonna try to get the PURSUIT OF HAPPYNESS guy to direct you again. Nuh uh. I’m calling the guy who did PINK PANTHER 2.” 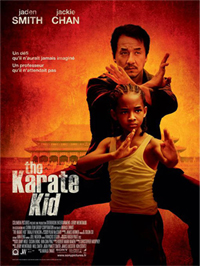 THE KARATE KID remake is a weird one. It uses the classic story of a skinny kid raised by a single mother moving to a new city, getting in a fight because of a girl, getting the reluctant help of the apartment maintenance man to learn martial arts through chores, then entering a tournament and pulling an upset on the bullies despite a leg injury. So I guess that’s enough the same that you gotta call it KARATE KID and not NO RETREAT, NO SURRENDER.

At the same time they made some pretty huge adjustments that change the whole thing. Mainly it’s that instead of moving to California he has to move all the way to China. That changes everything. It’s not just that he doesn’t know anybody at the school, he doesn’t even know the language, doesn’t understand the culture, could easily insult people by accident and get himself into trouble. And since it’s Jackie Chan he doesn’t learn karate, he learns kung fu. In one part I think he was watching a karate instructional video, but I think they cut out the part from the trailer where the bullies called him The Karate Kid. So as far as I could tell there’s no explanation for the title. I didn’t think they would be that lazy about it.

The other big change is the age. Will Smith’s son Jaden plays Dre, he’s a couple years younger than Daniel-San. Not a big change, you would think, until you watch the movie and see how a little thing like that shifts the whole context. Now they’re not in high school, they’re at a pre-sex age, so the bully being so possessive of the girl seems weirder. I suspect racism. The “no mercy” teacher seems even more irresonsible because he’s dealing with younger kids, and the almost UFC level of fighting in the tournament seems insane. No way is a kids tournament gonna allow elbows to the head! And the Miyagi character, Mr. Han, still works on repairing an old car, but he can’t give it to his student like in the original, because he’s not old enough to drive, and anyway most people don’t drive cars here, so I doubt it would have any of the beginning-of-manhood and courting-the-ladies significance that it had in California.

Chan is good as Mr. Han, and it’s really cool to see him doing a little acting and not just mugging. He’s a little harsh to the kid and has some emotional scenes. Of course, he’s not as great of a character as Mr. Miyagi with his froggy voice. But I like that it’s a different approach, hiring a real martial artist who you really would want to learn from. And he gets to fight. Against kids, though.

Yeah, there’s no skeleton costumes, but Dre does splash them with water and gets chased down, and Mr. Han intervenes. But in the original Miyagi is a little old man and the bullies are big broad-shouldered jock dudes, he’s the underdog in that fight. With Jackie Chan vs. kids you don’t got the same dynamic. He does a trademark Jackie Chan make-them-hit-each-other technique, but still.

Smith is really charismatic, less whiny than Daniel-San, more relatable I think. But I noticed he jokes exactly like his dad, and I’m not sure we need Will Smith 2.0, at least not the “funny” Will Smith. I like serious Will Smith better.

In the tournament I was impressed at first that it seemed like he really knew how to fight a little. In the original it didn’t seem like Daniel had learned jack shit, and I couldn’t believe he was allowed to compete with those guys. The remake has almost the reverse problem: he’s too good. What? I know there was some montages, but when did he learn all this shit? He does a flip and kicks the guy on the top of his head!

It’s an interesting depiction of China, not like you usually see in movies. He lives in an urban neighborhood with a nice park nearby where people hang out. There’s an American white kid in his building (playing the part of the neighbor who, in the original, invited him to the beach party and then disappeared).

Taraji P. Henson of course is lovable as the mom, as always. When she’s surprised to hear that the maintenance man is teaching kung fu Dre says “It’s China. Everybody knows kung fu.” Which is okay for him to say because earlier his white friend threw him a basketball and said “You play, right?” (the answer turns out to be yes, but not very well. Take that, stereotypes!)

Unlike the original movie this one then goes into some mystical kung fu business. When you learn karate you just go out onto a beach to practice, but with kung fu you go up a mountain to watch magical kung fu warriors including a woman staring down a cobra. (I like when Dre tries to do that trick on his mom.) I guess going from the semi-real world to martial arts movie fantasyland is to carry us into the highly exaggerated and choreographed tournament scenes.

The villains aren’t as funny as the goofballs in the original, but I kind of like them. The bully kid does a surprisingly good “I feel bad about this” expression when his master asks him to fight dirty in the tournament. The master seems realer and scarier than the old one, less laughable, partly because he never speaks English in the movie. On the other hand the original had the generational conflict between the senseis, Mr. Miyagi was a WWII veteran and Kreese or whatever his name was was in Vietnam, and this seemed to inform their philosophical differences and hatred of each other. It’s similar to the tension between Stallone and Dennehy in FIRST BLOOD, although mostly that’s in the book and only barely implied in the movie.

I know some people who love the original KARATE KID – they probly shouldn’t watch this. For me it wasn’t too bad, pretty likable, in some ways better than the original, but not in the most important area which is the relationship and chemistry between student and teacher. They’re both good, but they can’t match whatever the fuck it was in that original movie. For some reason they got that to work, and you can’t really repeat it.

The director is Harold Zwart, who also did AGENT CODY BANKS and THE PINK PANTHER REMAKE 2. I thought he was just some cheesy Hollywood hack, but I looked him up and I guess he’s an import from the Netherlands. He’s an artist. He did LONG FLAT BALLS 1 & 2, fer cryin out loud. But seriously friends. He does better than I expected. Honestly with a resume like that I was picturing more of a Rob-Schneider-vehicle level of directational skills. Actually it’s a slickly put together thing with nice photography and acting. And as at modernized tribute to the original it has the absolutely most horrible Disney channel type garbagey pop music soundtrack available by modern technology. It even has the little boy from Twitter on the end credits, with Jaden Smith pretending to rap in part of it. As a side note, I would like to plead with all parents to throw away your televisions, radios and computers until your children reach their mid-twenties. It’s just not worth the risk.

There are already plans for KARATE KID 2, and I hope those plans involve going full-on ridiculous and hiring a serious action director. Treat it like a BEST OF THE BEST sequel. Maybe Dre’s white friend gets murdered by Triads, and he has to go undercover in order to get access to kill the top guy. Or his mom gets kidnapped to force him to enter and win the Kumite. I’m not sure if it should be an all kid Kumite or if it should be all adults who for some reason are fighting a little boy to the death, and nobody ever says anything about it. Or another possibility is he and Mr. Han have to sneak into a building under siege to rescue hostages, and Han uses his knowledge of maintenance to get around.

There are alot of ways this could work. Let’s not blow this opportunity, Hollywood. This could be the next UNDISPUTED II.

Jackie Chan Jaden Smith remakes sort of remakes Taraji P. Henson
This entry was posted on Thursday, November 4th, 2010 at 3:22 am and is filed under Drama, Family, Reviews. You can follow any responses to this entry through the RSS 2.0 feed. You can skip to the end and leave a response. Pinging is currently not allowed.