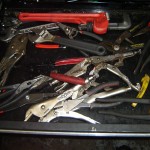 So it’s weird that 24 years later poor Tobe Hooper, director of TEXAS CHAIN SAW, wound up doing a remake of TOOLBOX MURDERS. But just like before, his movie doesn’t have much connection with the movie that inspired it. There’s a guy in a ski mask killing people with tools in an apartment building, but everything else is different. 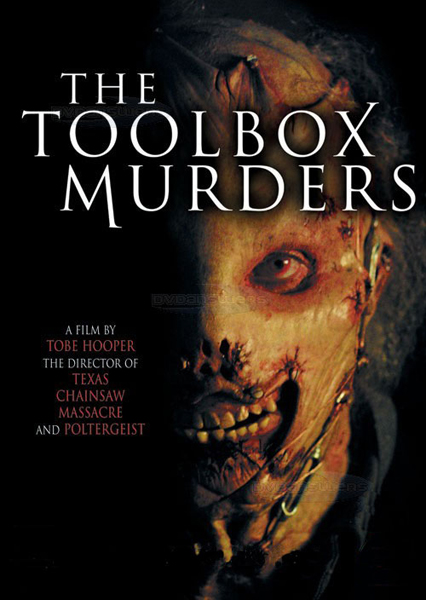 And honestly that’s for the best. The original has an amazing opening. Basically, some maniac in a black ski mask is massacring people in an apartment building with drills and hammers and shit. The camera goes through and shows you these people going through the routines of their daily lives as the guy comes through and butchers them. You just catch a little bit of a conversation or you hear their radio playing or something, you don’t get some phony movie explanation of what their character is about, so it has a horrible voyeuristic feel to it like you’re sneaking around right behind this nutbag.

This goes on for a while but eventually it has to come to an end and the plot has to begin, and that’s when the movie falls apart and it just kind of feels like some TV movie mystery. I think Cameron Mitchell turned out to be the murderer but I don’t remember why. He had some reason.

Hooper catches a little bit of that voyeuristic feel in his opening, showing the regular after work activities of somebody who seems like she’ll be the main character but who is actually the first victim. The real main character is Angela Bettis from the movie MAY, who is just moving into the building today with her husband. He’ll be out of the picture most of the movie because he’s a doctor and has to work all the time.

The apartment is old and kind of shitty, full of weird people who Angela always hears yelling at each other through the thin walls. Early on she hears some freaky shit across the hallway and actually calls the police, but it turns out to be two actors rehearsing a scene. So after that she has trouble getting anyone to believe her about the weird shit she witnesses in the building. There is in fact a guy in a ski mask killing people with tools, but nobody really knows this until the end of the movie, because nobody sees a body. The murders are not as graphic as in the original, in fact it’s almost a letdown how much you don’t see, but there’s one really sick and clever murder I gotta mention. Angela hears her next door neighbor get attacked and actually convinces the police to check her apartment, but they don’t see anyone inside. As they leave the camera pulls up to reveal her neighbor artfully nailgunned above the door, between the wall and the ceiling. Even bunches of her hair are nailed into the ceiling to put her in an eery pose. And then you realize that she’s still alive. But you never hear from her again in the movie.

Like the original the movie goes from brutal slasher to mystery, but instead of some old bullshit about the identity of the slasher this mystery is all about the history of this weird building. She slowly discovers its secrets, noticing that the 04 room on each floor is missing and that there’s actually a whole secret section in the middle of the building. Also, each floor has an occult symbol built into the wall, and the entire thing is part of some evil spell. Also, forgive me if I am getting too far ahead here, but the killer is a weird mutilated dude who was born inside a coffin and therefore has an unorthodox view of life and death.

While there’s talk of black magic and spells there’s never any mystical powers or magic beams or anything, which is nice. It’s up to you to figure out whether the magic actually works or not. Maybe they’re doing a spell and nothing’s happening but either way there’s a whole lot of dead bodies hidden in this place. The Apartment Building of 1,000 Corpses.

It’s kind of weird that I finally got around to watching this now, right after seeing THE BLACK DAHLIA, because there’s a reference to that crime in this movie (Elizabeth Short supposedly lived in this building, and an old man says he moved in in 1947, which gets you wondering if he was the one who killed her). The idea is that alot of people from all over the country come to L.A. to try to get into movies, and some of them disappear into this building. So there’s alot of L.A. history stuff, old movie stars and Aleister Crowley types involved in the building’s past. Plus the weird mutilated coffin-born ski mask Tool Time massacre guy.

Some people will probaly think the killer is laughable, because he’s a pretty over-the-top character who is only offhandedly explained near the end. But I liked how they did it, instead of following the standard slasher formula of explaining the killer’s backstory they just throw it at you in one sentence and otherwise leave him to be a mysterious, freaky sonofabitch. Obviously this character is not on the level of the original Leatherface, but I’ll still compare. Leatherface was cool because he comes out with that hammer and you got no clue where the fuck this guy came from. Now days horror is so wrong-headed that they not only gotta give Leatherface a backstory, they gotta make an entire movie explaining who he is and why he’s not cool anymore. For this one Hooper takes another unorthodox approach. He keeps the guy in a ski mask for most of the movie so that we’ll assume he’s a character we’ve seen unmasked and at the end we’ll find out who it is. But no! Instead Hooper just has an old man blurt out that it’s some weirdo born from his mom’s corpse when she was already in a coffin, and his birth was healthy and normal compared to what he’s been up to ever since. That’s all the explanation you get. Deal with that, viewers.

This is not that memorable of a horror movie, but it’s the kind of thing you might catch on cable and get really involved in. It is definitely much, much better than your average DTV horror movie, and more importantly, it’s the best thing Tobe Hooper has done in years. I mean I’ve seen that CROCODILE movie, it’s a miracle I could even get through it. Not so with TOOLBOX MURDERS. I thought it was pretty good. Well done. I would even watch a sequel.

Of course, I’m not saying it’s anywhere near the quality of CHAIN SAW or CHAIN SAW 2. Or the first half of LIFE FORCE. Maybe it’s on the level of THE FUNHOUSE. Maybe. But there is exactly 1 (one) little bizarre touch that shows you my man Tobe still has some of that crazy madman genius in him. While moving a table, Angela damages the wall in the corner of her apartment. When she’s examining the hole she made, she notices a weird little box is hidden inside the wall. She takes it out and opens it and finds some old teeth with gold fillings inside.

When she shows what she found to the apartment manager he plays it down, says it’s part of the character of the building. He gives it to Ned, the scary maintenance man who you’re obviously supposed to think is the killer, and tells him to destroy it. Later, Ned takes one of the teeth out, puts it in his mouth and sucks on it. Because that’s the type of guy he is. The type of guy who sucks on an old tooth that somebody found hidden inside a wall. You don’t see that in a movie every day.

Angela Bettis DTV Juliet Landau Rance Howard remakes Tobe Hooper
This entry was posted on Thursday, September 21st, 2006 at 11:34 pm and is filed under Horror, Mystery, Reviews. You can follow any responses to this entry through the RSS 2.0 feed. You can skip to the end and leave a response. Pinging is currently not allowed.