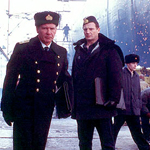 Maybe it’s the submarine thing. I know this is blasphemy to alot of people, but I never even got into that one submarine movie that everybody loves that’s by the director of DIE HARD and PREDATOR. I’ve tried and it’s fine and everything but I just can’t get myself excited about it like everybody else. Maybe I’m subconsciously rebelling against my old man, who worked on subs. I never went that way. I’m a proud surface dweller. Strictly a land man. Vote no on Atlantis.

K-19 is another Cold War nuke scare story, but this one based on a real incident back in ’61, instead of a fake book from the ’80s. And the real difference is that it’s not about Americans and Soviets facing off, it’s only about the Soviets. This is weird at first because the stars are Liam Neeson as the Captain and Harrison Ford as the higher-up-Captain who comes in to boss him around later, and we know those dudes aren’t Russian. Of course we know Neeson’s not German either, and he got away with German-accented-English-as-metaphor-for-German in SCHINDLER’S LIST. I actually think he works okay here because his normal movie voice is already an amalgam of Irish-accent and not-Irish accent. He has his own Neeson accent that absorbs and digests any other accent it desires. It can replace any accent but only for 99 minutes in sunlight.

Harrison Ford takes more getting used to, though. Accents don’t seem to be his forte. He gives it a shot, but he seems to slip in and out. It’s kind of a minimalistic accent I guess. I thought Peter “Li’l Malkovich” Sarsgaard would be more consistent portraying the last minute replacement reactor-engineer, but he also takes the minimalist approach, so maybe this was an intentional production-wide choice, like how in VALKYRIE they chose to have everyone use their normal accents and in BUGSY MALONE they chose for everybody to be children. 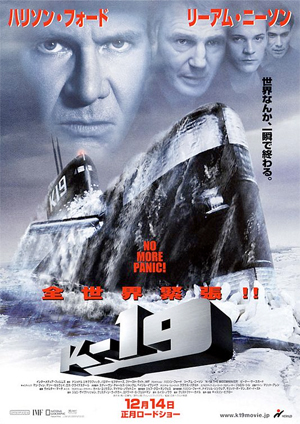 Once you can get past that conceit – it didn’t take me long – this is a compelling and unique drama. The Soviets are desperate to make a show of force to the Americans, as a deterrent, and they rush this K-19 sub into production like a PARANORMAL ACTIVITY sequel. It’s even got a release date. Get it to sea trials and fire off a test missile where those capitalist pigs will see it and shit their pants. I don’t care if it’s not ready! Make it ready!

Even while it’s being built there’s alot of bad luck. Something collapses on a guy, another guy gets run over on the construction site, shit like that. The bottle didn’t break when they christened it, that’s either an example of how wrong everything went or the reason for all of it. Way to throw a bottle, guys.

Then they get it out in the water. Submarine lowers, tensions rise. Neeson encourages a one-big-family, we’re-all-in-this-together type of attitude on the ship, but then grumpy old Ford comes on to boss everybody around, fires a guy, yells at everybody, pushes the sub to the breaking point in drills, comes real close to getting all of them killed, insists he was right to do it. Neeson goes back to his room to sulk.

The real challenge comes when they discover their reactor broken and heating up. They gotta figure out an emergency repair because if they don’t it’s gonna blow up worse than Hiroshima, take out the American sub that’s near them and possibly start a nuclear war. Which would be bad. The attempted repairs require sacrifice, and plenty of sailors line up to do it. They gotta go in with inadequate protection, basically stick their faces in the radiation oven, to try something that won’t even necessarily help. Meanwhile there’s a CRIMSON TIDE situation brewing, the captain and the commander have different philosophies, different loyalties, and a mutiny could raise its head. Dramatic sub shit, you know.

There’s so much going around in these young men’s heads. They want to prove their loyalty to the Communist party, do their duty for their country, for their brothers on the ship, but also they want to come home alive, not radioactive, to see their fiancees again. Sarsgaard has to deal with his own cowardice. He freaks out, misses his turn in the reactor, another guy takes his place heroically. The others look at him with some pity, probly some disgust, but they don’t say anything. They don’t have to. He’s sitting there knowing he might’ve saved his own ass, but also that he’ll always hate himself for what he did, and that his brothers will never respect him.

Here’s Kathryn Bigelow dealing with all these masculine themes in a movie where the most prominent female role is a woman behind a fence in one scene at the beginning. Bigelow’s one of a kind. And like with ZERO DARK THIRTY these complex ideas are suggested by the events and the expressions on the actor’s faces much more than they are pointed out or explained with words.

At first I thought Harrison Ford and his drifting accent were too distracting, that it was one of those things where they choose a movie star in order to get the thing financed but it ends up being damaging in the end. But eventually it won me over as a brilliant casting decision. On the surface it takes advantage of his grouchy, pouty bitterness. Most of the character is in his frowns, so aside from the Russian-ness it’s a natural fit for him. The strict, grumpy guy that’s scary enough that you don’t notice at first how honorable he is. Seems like a bad guy, but isn’t.

And then of course it’s using Ford’s status as an American icon, and even as Tom Clancy’s character Jack Ryan, even though he didn’t play him in the submarine one. Captain Vostrikov is equally dedicated to his country, but obviously it’s a different country and system than most of our movie heroes. It’s a perfect way to get across this truth about both sides having more in common than they realize. We never see the American sub crews except from a distance, but we know there are many values that both sides share, and that they have the same fears of the other side, the same need to assert their courage, to know that they are men, to make their country proud, to not disappoint their captain, to get home alive and see that woman in person instead of just in a little photo they keep in their pocket.

It’s an impressive production too. There are CGI shots here and there but mostly it’s real shit you’re looking at. I think there’s a shot of Ford poking out of the top of a real submarine out in the water. If it was fake it was good enough to convince me, anyway. The movie was actually produced by National Geographic, believe it or not. It cost about $100 million but wasn’t financed by a studio, so it’s one of the most expensive independent films ever made (and also a major flop). They got Walter Murch to edit it and the cinematographer is Jeff Cronenweth, who’s done some of Fincher’s movies. (His dad did BLADE RUNNER.)

And this is small but worth noting: I was impressed by the old man makeup in the epilogue. You don’t usually see good old man makeup. I guess it’s partly because it’s not real elaborate, it’s pretty subtle. Maybe it all comes down to the old man glasses they chose. I don’t know, but it’s good work.

I gotta say, I did not have high expectations for this one, it was a crossing-it-off-the-list type of viewing since I’d seen all of Bigelow’s other directorial works. But this is a really good, underrated movie, I found it very moving. I wish I could’ve watched it with my dad some time. He would’ve told me what was wrong with it, but it would’ve been fun.

Cold War Harrison Ford Kathryn Bigelow Liam Neeson National Geographic Peter Sarsgaard Russia submarine Walter Murch
This entry was posted on Wednesday, February 20th, 2013 at 2:52 am and is filed under Drama, Reviews, Thriller. You can follow any responses to this entry through the RSS 2.0 feed. You can skip to the end and leave a response. Pinging is currently not allowed.