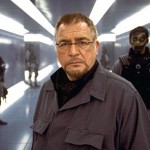 Avery (Brian Cox) treats his dog Red like family. He doesn’t talk to him in funny voices or make him wear a dog sweater. But he does apologize to him for making him wait while he gets his things together to go fishing. The movie gets rolling in about scene 2 when three teenagers show up, pretend to make small talk, try to rob him, and then shoot Red.

Going in I really thought this was gonna be the rural version of DEATH WISH 2. Instead of his housekeeper and daughter getting raped it’s his dog getting killed. Instead of creeps infesting L.A. it’s brats in the woods of rural Oregon. Avery tris talking to the boy’s father, but the boy’s father is Tom Sizemore. So that doesn’t work out. He tries to go through the police, through the courts, but there’s not enough evidence and the kids are too connected, so the system fails him. But he knows guns. He’s a veteran. Time for revenge? 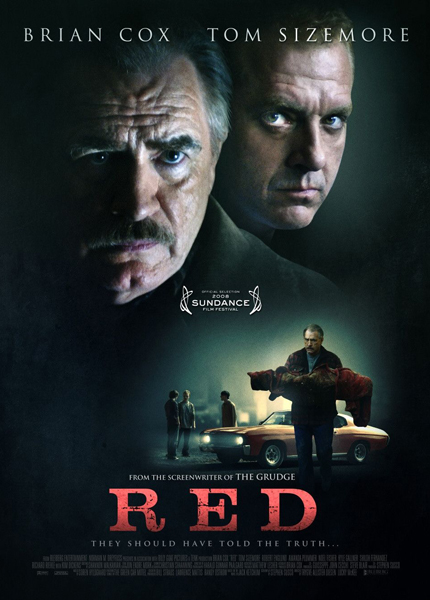 Not exactly. This isn’t a revenge movie, it’s a thriller in praise of honesty. Avery accepts that Red is dead. This has personal meaning to him more than just man’s best friend shit. We learn about the tragedy that took his family from him before old Red was even fully grown, and why it gives him strong opinions about out of control kids. All he wants now is for the kids to admit they did it. He doesn’t want money. When one of the kids apologizes he’s sure to say that he appreciates it, but needs him to tell his father and the police what happened. Just clear the record.

For us revenge fans there’s a pretty satisfying scene where he outsmarts the kid and gets to beat him up a little, but this only escalates the conflict and makes the problem worse.

Cox is good in a rare non-evil or pervert role, though with the kind of speeches he has to make he sometimes comes off a little more effete than the rugged man he’s supposed to be. But he’s a real good character, the kind who lives by a code and does not seem to give up. You never rooted so hard for a guy to get some kids to apologize to him for shooting his dog. Ever.

One thing that very easily could’ve killed the movie is the actors playing the teens. It’s easy to imagine a movie where they’re played too over-the-top or look too much like TV stars, or just are bad actors. Fortunately Noel Fisher (the shooter) and Kyle Gallner (the more remorseful younger brother) are both very convincing in their roles. Fisher is scarier than your usual movie juvenile delinquent because he isn’t some tough guy, he’s very believable as both the deeply fucked-in-the-head tormenter and the innocent nice guy face he shows to his dad. Also there’s a good scene where he flips out at a baseball game.

This is not a horror movie by any means, but Robert Englund has a very small role as the dad of one of the three teenagers. If you’re a horror fan you should also keep an eye out for Ashley Laurence, the heroine of the two good HELLRAISERs (1-2)

RED is based on a book by Jack Ketchum. And you may be wondering the same thing I was: “How does it compare to his work on Dennis the Menace?” Well it turns out that was Hank Ketchum, this is Jack Ketchum, which is the name he uses when writing. Or possibly a different person. Anyway it’s not very much like Dennis the Menace, it’s more like Marmaduke if Marmaduke died and then an old man tried to find justice. Maybe Crankshaft could be the old man.

There is some mystery about the director, because Lucky McKee started it out but had some kind of disagreement or duel with the producers and either quit or got fired or was kidnapped or forgot that he was doing a movie and went to do something else. At any rate the movie was abandoned. Later they hired a new director, Trygvie Allister Diesen, and somehow convinced Brian Cox to come back and finish it. I didn’t notice much inconsistency except that the TV reporter played by Kim Dickens was a newspaper reporter by the end. I must’ve missed an explanation for that though because from what I’ve been able to gather Lucky McKee’s version had his muse Angela Bettis in the Dickens role, so those scenes got reshot.

After all that it was good enough for a very small theatrical run, at least better than getting dumped straight to video. But somehow the screener still had no end credits on it. You’d think they would’ve figured out who made the movie if it already played in theaters.

I know there’s alot of dog lovers out there. I’m not really one of them, I still don’t understand why dogs eat cat shit out of a litter box, I have a hard time relating to that. But this movie is for you. Yes, you will have to endure the tragedy of a murdered dog (not gorey, until later) but the movie is sort of worshipful of dogs, at times portraying them almost as guardian angels. It has a great respect for dogs, but I suppose also for humanity considering the way Avery tries to help someone who has done him so much harm.

If you are the type of person who enjoys good stuff, please consider RED.

This entry was posted on Wednesday, October 8th, 2008 at 1:19 pm and is filed under Reviews, Thriller. You can follow any responses to this entry through the RSS 2.0 feed. You can skip to the end and leave a response. Pinging is currently not allowed.