So the idea I guess is that drug kingpins aren’t that much different from any of the other rich fucks in new york. I mean you pretty much like these people. They really do care about their daughter and want to make her happy, even if they think they have to do it by buying shit. They have lots of old ladies sitting around the house and they hug and kiss them alot. When it comes down to it, their family life really is more important to them than their drug empire, although they don’t know how to live like a regular working class individual. And one thing that’s refreshing is that other than the fact that he sells drugs, the husband never shows a dark side. You never see him being ruthless. He doesn’t only SEEM charming and innocent, but have a furious anger hidden beneath. As far as we see, he’s just a sweet, romantic guy. Come to think of it, this guy is BETTER than the other rich fucks in new york, if a little superficial. 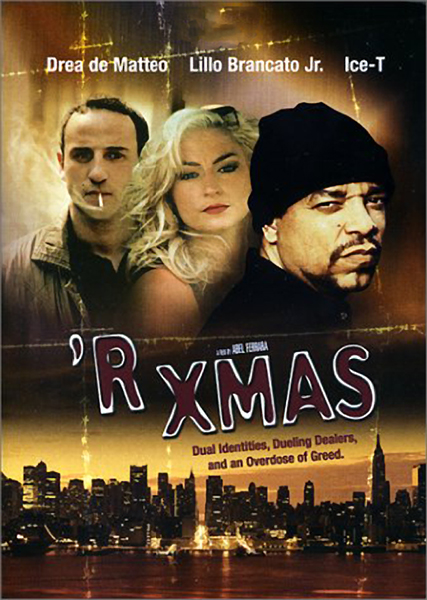 The plot turns out to be about the husband getting kidnapped and held for ransom, and how the wife tries to find enough money even though most of their organization went to Puerto Rico for Christmas. The wife turns out to be the strongest character in the movie and it’s interesting to watch her try to handle the crisis, and how the family members try to support her the same way a normal family would handle a normal crisis.

This is not what you expect from a crime movie. There’s not really action in it. It’s more of a family drama. What really works about the movie is that it all feels real. The acting is perfectly naturalistic. I’m sure the cinemasters and people like that will remember these performances at end of the year listmaking time. Apparently both of the leads have been on either THE SOPRANOS or THE SOPORNOS, I don’t know, I don’t watch those shows.

But now for the what the hell. There are some things I don’t understand about this picture. I thought maybe listening to the director’s commentary track would help, but all it did was raise more questions. Ferrara’s commentaries are always hilarious, and they made me like him even when I didn’t like his movies. But he doesn’t offer much insight into the movies. He doesn’t even sound like he really made them. He mostly says “lookit this, lookit this” and “oopsie daisy” alot, and laughs at his filmatistic ineptitude. On this one, he just keeps talking about not having the color blue in the movie.

My first and biggest question is, ‘R XMAS? What does this title mean. How is it pronounced. Is it a typo. You’d think this would come up on the commentary track, but they never say the title out loud. You do find out that Ferrara doesn’t think there should be an apostrophe (or slash as he calls it) in the title, but the other guy does. But neither of them introduce themselves and the menu just calls it a director commentary, so you don’t even find out who the other guy is. (I’m guessing cinematographist.)

How can I recommend this movie to people if I don’t even know how to pronounce the title?

A less specific question is, what’s the deal with the score? It is credited to the early gangster rapper Schoolly D. But it consists of one looped hip hop track, and several upbeat keyboard interpretations of “Silent Night.”

My third question, what is this mayor of new york shit? There is a title card at the beginning that says:

Then at the end there’s another one that says:

Less than one
month later
Rudolph Guiliani
is sworn in
as the 107th
Mayor of New York City.

Seriously, I didn’t make up the “To be cont…” part. That’s really what it says.

Now I really don’t mean to say this like because I don’t understand it it must be bad. All I’m trying to say is, I am real confused here people. I kind of feel like when you’re in a dream and you try to read something but it doesn’t seem to be quite written in a real language.

Obviously this is trying to say something about the way these mayors affected life in New York City, but maybe Ferrara is being too subtle for me on this one. Are the Dinkins policies supposed to be responsible for the police corruption we hear about in this movie? Or for the drug dealers getting away with it for so long? When the story abruptly ended with “To be cont…” I figured we really were gonna get another installment which would contrast their lives during Dinkins with their lives during Guiliani. I don’t know what that means, all I know is that the dude was usually compared to Hitler and then on September 11th he became Jesus. At the same time, the NYPD became the fuckin Super Friends instead of the guys who put 47 bullets in an innocent, randomly chosen, unarmed black dude standing on his own porch. And stuck the toilet plunger in the guy’s ass, etc. All that’s in the past now. Clean slate, they said so on TV. But what effect did these people have on the lives of recently reformed Dominican drug dealers?

I don’t know if we’ll find out, because on the commentary track Ferrara and the mysterious unnamed man say things like, “If we really do another one, we should make it about this.” Like they don’t even know if they plan to make one, or what it would be about. And even if they are, maybe they should’ve just made one too long movie with two stories instead of one too short movie that may or may not ever finish.

I don’t know. I don’t get it, but I like it. When I figure out how to pronounce it, I’ll tell people about it.

Abel Ferrara Christmas Christmas crime Ice-T
This entry was posted on Tuesday, November 19th, 2002 at 6:52 am and is filed under Crime, Drama, Reviews. You can follow any responses to this entry through the RSS 2.0 feed. You can skip to the end and leave a response. Pinging is currently not allowed.