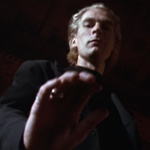 This, unfortunately is our hero who has to face off against the Warlock, who is played by Julian Sands but is apparently not exactly the same warlock he played in the first one. That’s pretty unusual, now that I think about it. As the movie’s Wikipedia entry currently puts it, “It is a sequel in title only to the 1989 film WARLOCK, and stars Julian Sands returning in the title role.” It’s kind of like if LADY DRAGON 2 starred Cynthia Rothrock again as the Lady Dragon but it was totally unrelated to the first one and not about the same lady dragon. Oh, wait. That is what they did. 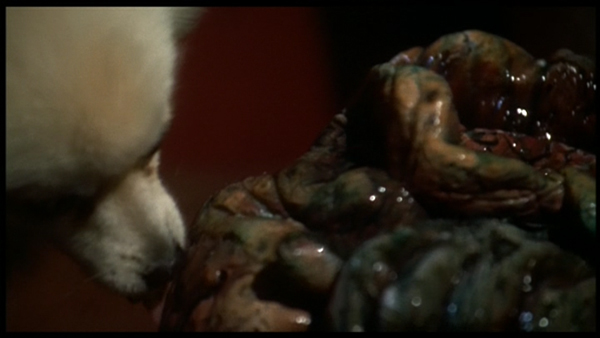 So the pile kills Obelisk and then grows into a naked Julian Sands, which kills her by crying so that all the mirrors and glass in her bathroom explode onto her and then uses her body to communicate with the Devil and receive a mission to collect all the runestones and cause Armageddon or whatever.

One of the stones he gets at a fashion show, finds this lady that has it and takes her for a flight over the city, Superman style. It seems to turn her on. Then he drops her.

Meanwhile it turns into a Luke Skywalker thing where dad and his Druid buddies train Kenny how to use magic. He has to learn how to control a floating baseball with his mind, levitate in a yoga pose and pick up a chipmunk. There’s a high amount of low budget compositing effects in pretty much the last year when that stuff wouldn’t be done without the aid of computers, so that’s fun. 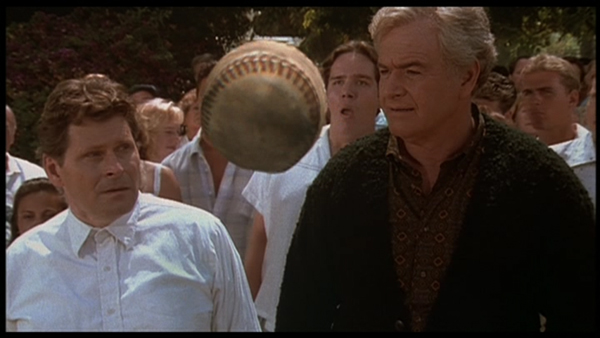 This is another example of what I’m talking about, though. The way he trains in magic Druid powers is by learning to use his mind to make a baseball fly around. And then he sticks with the baseball thing, he keeps using it. And he (mistakenly) thinks it makes him a badass. This is what he says: 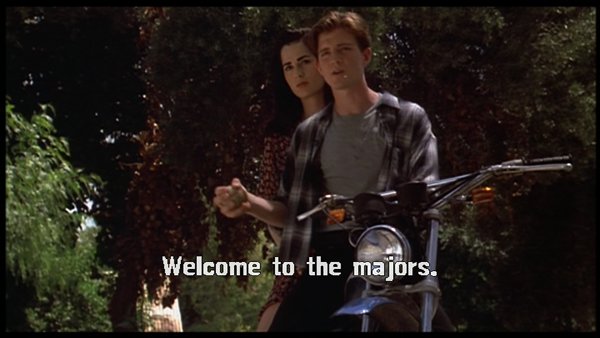 How can you have magic powers and be riding a motorcycle and have a good lookin young lady riding with you and still be a dork? Make up baseball-themed one-liners, that’s how. It’s like if the Karate Kid always insisted on using sponges in all his fights and then tried to make car wash-related tough guy talk. 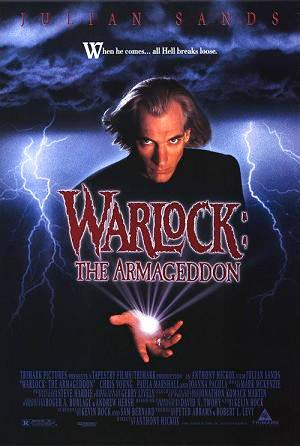 But hey, it works for him. That girl he’s with is his actual human girlfriend Samantha (Paula Marshall), who that meanie Andy believes is his girlfriend. I can’t really respect her not straightening him out on that particular issue. I guess it must be on account of her dad (Bruce Glover, HARD TIMES) is the town’s only reverend and she’s supposed to go along with the community’s prevailing anti-druidic attitudes. But the rev actually is pretty cool about it, he tries to calm down everybody when they mob up and seem two seconds from heading to the pitchfork and torch storage shed. This is actually because he has a whole secret history with them and is very aware of what the real fuckin deal is.

There’s a weird thing that Kenny’s dad (Steve Kahan, Capt. Murphy from all four LETHAL WEAPON pictures) has to shoot him to death for him to be reborn. I don’t really get it storywise but it’s an excuse for a pretty cool Sam Raimi type camera move. Then his girl finds out she’s a chosen one too and she wants to get killed and come back as a living dead person too. So they can ride around on a motorcycle and deal with runes and warlocks and eclipses and the Holy Grail and all that shit that teens think is romantic. Stupid teens.

By the way, another thing about Kenny and his ability to get by on a minimal amount of likability: before he’s going to fight a witch he feels like this is what he should say to the virginal reverend’s daughter: “In the old days warriors would make love before going off to battle.”

And it works! Cut to them rolling around in a bunch of leaves. As Druids do. I don’t know what’s more presumptuous though, the sex request or referring to himself as a “warrior.”

Anyway, our teen Druid chosen ones get the Dagobah treatment and it keeps cutting to the Warlock, who is headed to them on a murderous cross country antiquing trip. He goes to a sideshow, where he picks up a screaming little person and impales her in an iron maiden for being a psychic. (Kind of hypocritical for a warlock who, at least when he was playing that other character, suffered under the Inquisition.) Also he picks up a prostitute who he scalps and throws out the window just to get blood to fuel his magic human skin map of the United States.

There seems to be an attempt to treat the WARLOCK sequels like Freddy pictures, between the new mythology and Dream Warrior like heroes and the string of gimmicky supernatural kills. For example there’s some artist dude and the warlock arts him to death: 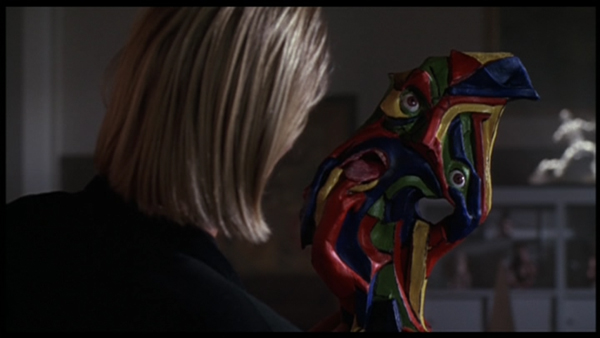 Director Anthony Hickox (SUBMERGED, BLAST) actually had some experience in making sequels that seem to want to be Elm Street sequels, having already done HELLRAISER III: HELL ON EARTH, which also starred Marshall. Meanwhile, it sounds like HELLRAISER was for sure the temp music, and composer Mark McKenzie (SON OF DARKNESS: TO DIE FOR II) does a decent job of mimicking it.

This is certainly a watchable sequel with lots of cool parts, and I respect that it completely switches things up. More of a rehash would’ve been more of a bummer. But this is definitely lacking the fun tone of the first one. I think the main appeal was in those lead characters, the likable airhead and the warrior from another era. These leads are only funny when they’re not supposed to be, so it’s not as good in my opinion.

But I don’t want to downplay how important it may be to the Druid community, who have to deal with either being completely ignored or portrayed in a more negative light. If this catches on you’ll probly have alot more people converting to Druidry.

Anthony Hickox Craig Hurley druids Julian Sands Kevin Rock Paula Marshall Sam Bernard Zach Galligan
This entry was posted on Thursday, September 24th, 2015 at 12:13 pm and is filed under Horror, Reviews. You can follow any responses to this entry through the RSS 2.0 feed. You can skip to the end and leave a response. Pinging is currently not allowed.

20 Responses to “Warlock: The Armageddon”