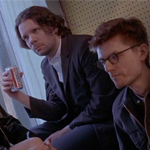 I kind of liked it though.

Despite the title, it’s the story of Simon Grim (James Urbaniak, ACROSS THE UNIVERSE), a garbage man who lives with his mom (Maria Porter, whose only other credit is in HARD ROCK ZOMBIES) and his sister Fay (Parker Posey, BLADE: TRINITY) and doesn’t seem to do much except sometimes sit in an alley drinking Budweiser. Henry Fool (Thomas Jay Ryan, TEKNOLUST) is a guy who moves into their basement apartment who always smokes and also drinks Budweiser and talks in a fake smart guy voice that’s a little bit challenging to put up with for a whole movie and makes a big fuckin show of stacking up his notebooks where he claims to be writing “my confession,” a powerful and brilliant “philosophy, a poetics, a politics if you will, a literature of protest” that’s gonna “blow a hole this wide straight through the world’s own idea of itself” that he won’t let anyone read because he’s not done yet and also I don’t think you see him working on it either but just trust him, he says it’s amazing. 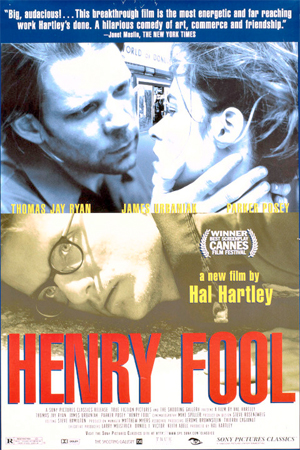 Simon follows this jackass around, soaking in his self-mythologizing and taking his advice to try to express himself in a notebook. Simon writes a poem that we never hear a word of, but many characters will describe it and react to it. It makes a mute girl (Miho Nikaido, TOKYO DECADENCE) sing, turns the local teens into poetry fans, gets called pornographic and stirs up controversy with the school board, local scolds, politicians and the Pope, who lumps together “rock music, drugs, and contemporary poetry.”

I’m not sure if we’re supposed to believe his poem is any good or not. On one hand, it gets those extreme reactions. On the other hand, a bigshot publisher (Chuck Montgomery, Courage the Cowardly Dog) reads it, thinks it sucks and rejects it despite being desperate for “marginalized poets.” Later attention changes his mind about publishing it, but he doesn’t turn into a phony kiss ass – he now thinks he can sell it, but won’t pretend he thinks it’s good.

Their lives are simple. They spend much of their free time hanging out at Mr. Deng (James Saito, Shredder from the original TEENAGE MUTANT NINJA TURTLES movie)’s deli, even though there’s not much room there and it kind of seems more like a 7-11 than, like, a coffee shop or something. Sometimes Simon gets threatened and harassed by Warren (Kevin Corrigan, who we’ll also be seeing in BUFFALO ’66) because Simon watched him having sex in the alley. Warren has a whole character arc where he tries to change his life by trading his leather Fonzie jacket for a tie and working on the congressional campaign of Owen Feer (Don Creech, who played Stryker in X-MEN: FIRST CLASS). He talks up his candidate in very positive terms, but then yells “Immigrant!” at Mr. Deng, so you get an idea where he’s coming from. It’s unusual to see a right winger character dream about making the world a better place and then being disillusioned when it doesn’t work out the way he wants it to.

I like the way the movie riffs on the delusions of wannabe Important Writers and discoverers of Important Writing. The people at the publishing house recognize the promotional value of Simon being a simple garbage man, and Henry talks like that makes him legit, yet Henry is embarrassed of his own past as a lowly janitor.

Though I think this is so dry and lacking in punchlines that alot of people could watch it and not notice any comedy, it’s important to note that there’s a scene where Simon projectile pukes onto a butt, and another one where we hear Henry take a loud liquidy shit for like 2 minutes, during which a misunderstanding leads to him getting married. Take that, Farrelly Brothers.

This is a title character who is swinging for the fences in the competition for most insufferable indie movie douchebag of the summer. He’s as arrogant and full of shit as anyone in THE LAST DAYS OF DISCO, but straight out declares himself a genius and, unlike any of them, is guilty of (SPOILER FOR WHAT HE TURNS OUT TO HAVE BEEN IN PRISON FOR) having sex with a 13 year old girl, which he only regrets because he says it was “a pathetic little conspiracy, a transparently desperate attempt to discredit me and my ideas.” If he had to go door to door disclosing his sex offender status like Jesus Quintana he’d probly stay at each house for 45+ minutes talking up his profound genius.

Obviously he’s not supposed to be a great person. He’s supposed to be, you know… a fool. You’re invited to think he’s a liar and laugh at his pseudo-profundities like (reading a porno magazine), “I learn so much from these magazines, Mr. Deng. And I refuse to discriminate between modes of knowing.” And there’s a scene where he aggressively grabs Fay, almost Trump style, and it would be sexual assault except she’s turned on by it and goes into the bedroom. He starts to follow and then turns back and makes sexy faces at her mom. When Fay comes back out to see why he’s not there yet he’s fuckin her mom on the couch. And he acts all surprised, as if she came home early and caught him. I didn’t want you to find out like this. And then he tells Simon that he just fucked his mom and that his sister is jealous. And when Simon doesn’t want to talk about, he says “Bad move, Simon. A poet’s gotta be able to contemplate anything.”

So this guy really, really sucks. But I can’t help wondering if he’s supposed to be a little more cool than I think he is. There’s supposed to be at least a little bit of an intellectual literary bad boy aura to him, isn’t there? In the end Hartley must mean for him to have some redemption in being presented with the same situation that got him in trouble before and this time going to confront the girl’s stepdad about abusing her. (At least that’s how I interpreted what he was doing. There’s some room to read his intentions different ways.) It really feels like we’re supposed to be rooting for him to get away at the end. If so, the movie has greatly overestimated the character’s charms, in my opinion. But I’m really not sure.

HENRY FOOL is Hartley’s seventh feature, and it came out ten years after his first one, THE UNBELIEVABLE TRUTH. Just by watching it I don’t think I’d guess it came from a director with that much experience. He’s had eight more films since then, including two HENRY FOOL sequels: FAY GRIM (2006) and NED RIFLE (2014), which is his most recent film. He doesn’t really seem like the type, but he’s been working in TV since then (if Amazon counts as TV), directing eight episodes of a show called Red Oaks.

This was the first film for both of the leads. Ryan has gone on to be in THE LEGEND OF BAGGER VANCE, ETERNAL SUNSHINE OF THE SPOTLESS MIND and some other things. Urbaniak has done a ton of stuff, but is best known as the voice of Dr. Venture on the long-running cartoon The Venture Bros. It’s also the first film for Liam Aiken, who plays Henry and Fay’s son Ned in the last part. He went on to be the kid in STEPMOM, ROAD TO PERDITION and LEMONY SNICKET’S A SERIES OF UNFORTUNATE EVENTS. He was also in this obscure neo-noir I liked called THE FRONTIER. Posey was the marquee name here, not only being the ’90s Queen of Indies because of DAZED AND CONFUSED, PARTY GIRL, THE HOUSE OF YES, THE DAYTRIPPERS, etc., but she’d also recently been in WAITING FOR GUFFMAN, starting her residency as a Christopher Guest player.

When I say this is Hal Hartley’s biggest hit, I’m still talking about it made $1.338 million total. At its widest release it was only on 51 screens. These days can a movie be that small and still cause a big fuss? I’m not sure, but there were a bunch of ’em like that back then.

1998 shit: The internet is talked about as a new thing people are learning about, there is a fatass laptop. Some guys at the publishing company talk about the end of print, a future where computers replace TVs as “a direct connection to all forms of media.” They’re not that far off, except maybe when they say “We’ll become more informed, more literate, increasingly productive…”

Outside of that discussion there’s not much of an attempt to be current. To me it doesn’t really look or feel like a late ’90s film. I’d guess earlier. There is no bullet time, no discussion of old movies or The X-Files, no trip hop or pop-punk-ska. There’s no music at all outside of the very simple score by Hartley himself. For an indie movie in 1998 to have this little pop culture in it is rebellious.

Hal Hartley James Saito James Urbaniak Kevin Corrigan Liam Aiken Parker Posey Summer of '98 Thomas Jay Ryan
This entry was posted on Wednesday, July 11th, 2018 at 10:14 am and is filed under Comedy/Laffs, Reviews. You can follow any responses to this entry through the RSS 2.0 feed. You can skip to the end and leave a response. Pinging is currently not allowed.