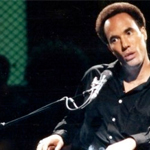 He’s an actor I’ve always liked, but I could understand if you didn’t. He has a very theatrical style. He’s a character actor but he likes to show off. He always carries around a little stick of scenery in his pocket to chew on. MERCENARY FOR JUSTICE is an example of him getting a little loosey goosey with the accents.

In this one man show Smith plays the Black Panther Party co-founder at some point later in life, when he’s in prison, and has been on drugs. He’s reminiscing, telling stories about his life, sharing some opinions, going off on tangents, rambling. He starts out talking about how shy and uncharismatic he is, but gets more and more animated as it goes on. There’s no set really, he’s in a chair on a stage with the audience around him and there’s a fence behind him, with people standing up watching. I wasn’t sure if these were just regular audience members or if they were props, because some of them had afros. At times documentary footage would show up behind him, it looks like a post-production effect, not projected on stage, but I’m not sure. 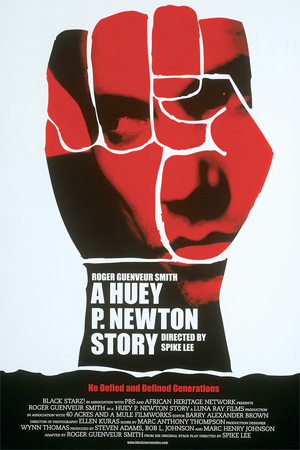 You know A CHRISTMAS STORY? This is like that only it’s a Huey P. Newton story.

The exact premise eluded me at times. At the beginning he asks “Is this thing on?” so I thought we were pretending he’s locked up but filming an interview (as he famously did at least once). But other times he acknowledges the audience, like when he comments on a laugh starting at the back and spreading up.

And the time period is muddy too. I thought there was one part that indicated Vietnam was recent or still going on. But eventually he starts talking about Biggie Smalls! He doesn’t call him that, just quotes a kid named Christopher that he saw in a documentary about rap music. I don’t know if that exists or would’ve been released before Newton died in ’89. I do know that when he mentions police killings and “41 shots” that’s a reference to Amadou Diallo, a random New Yorker who faced the firing squad of cops who mistook him for a serial rapist. But that happened ten years after Newton’s death. So we gotta accept that he is speaking to us from some kind of timeless void, I guess.

From this dimension beyond human understanding of chronology he puts on a good display of all Smith’s strengths and weaknesses as an actor. It’s him sitting on a chair by himself for the whole thing, so he fuckin goes for it. No trick will go unbagged. He does an accent, much more of an impression of how the real Newton talked than my man Tank did in PANTHER. He starts out very shy, and stutters sometimes. Other times he doesn’t exactly stammer, but repeats a phrase over and over again like he’s trying to put his thoughts together, but often he’ll repeat it a couple more times than seems natural. He chain smokes and nervously taps one leg pretty much through the whole performance.

He’s conversational with the audience, asking lots of rhetorical questions, or seeming to be hearing invisible questions. He keeps asking “Huh?” in an annoying, honking sort of way, more like an uncontrollable tic than a question. When he’s talking to the audience he doesn’t seem to quite connect, he acts like it’s call and response but doesn’t wait long enough for the response.

At some point he gets up, takes his shirt off, starts dancing. After that he starts talking fast and crazy and bug-eyed, implying he’s drugged out. He gets emotional, stops mid sentence, looks like he’s gonna start crying, changes the subject. The works.

More than Huey Newton it seemed to me like he was imitating Richard Pryor. The voice sounds a little bit like Pryor, so do the voices he uses for different characters in his stories. But also just the rhythm of his storytelling. The little asides he makes, the placement of the punchlines, the way he pauses for laughter, or quickly moves on without pausing for laughter, or the way he laughs himself. I noticed this similarity and then all the sudden Smith mentions Pryor in the monologue. He actually comes up three different times, first when Newton says Pryor is producing a movie about him. This isn’t like Biggie, they really did know each other, and Newton is even seen in the audience in LIVE IN CONCERT.

Like PANTHER, I couldn’t help but take this as a period piece within a period piece. Here I am looking back at a movie from 2001 about a guy in the late ’80s looking back at the ’60s and ’70s. And in a way yes, it does capture 2001. Not just because it was before 9-11, when alot of American brains shifted their focus to global problems instead of domestic ones. I just think in general back then Americans were a little more interested in this history, the militancy that came after Vietnam, the idea of Black Power. I mean, Smith was definitely trying to remind people with this show, it wasn’t a daily topic of conversation. But it seemed like some people cared. Now the only idea of a Black Panther is like I mentioned in the other review, during election coverage Fox News pretends some guys called “the New Black Panther Party” are scaring white people away from the polls by standing near them looking black.

Here’s one good thing about Spike Lee doing little movies like this: I would never in a million years have seen this performance if he didn’t make a movie out of it. Not because I was trying to but was on the other side of the country, but because I wouldn’t have known to or wanted to. Lee is not just preserving, he’s also curating things for us to see through the process of jointification.

Now, it would not be a tragedy if I didn’t see this. Nobody would wear a black armband the next day. I wouldn’t have missed it because I don’t really think it’s my thing, this one man show business. It seemed a little silly to me, seeing a guy do some of that shit, and in particular seeing how this guy does some of that shit. But you gotta try things out sometimes, you gotta broaden your horizons a little bit. How do I know I don’t like something like this if I refuse to see something like this?

I feel like I like I learned some things about Newton, and it made me curious enough to read some more on him. And I learned more about Smith’s acting, what he’s about and what world he comes from that makes him such a weirdo fighting Seagal. I think we are all better for having heard this particular Huey P. Newton story.

civil rights made-for-cable-movies one man show performance art Richard Pryor Roger Guenveur Smith Spike Lee
This entry was posted on Thursday, January 15th, 2015 at 12:55 pm and is filed under I don't know, Reviews. You can follow any responses to this entry through the RSS 2.0 feed. You can skip to the end and leave a response. Pinging is currently not allowed.