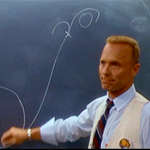 Ever the square, Howard (who had spent part of his 1970 guest starring in a Lassie two-parter) made a period piece that’s a worshipful tribute to people completely removed from all of that. The characters in APOLLO 13 are almost entirely white, upper middle class, from academic backgrounds, or military, but lucky enough to be in the space program now instead of dropping bombs. The men have crew cuts or comb-overs, they wear glasses and ties, unless they’re astronauts. The hippest thing they do is drive a Corvette. The wives stay at home worrying about them while watching TV or listening to the radio. The only sign of a counterculture is in a daughter’s hippie Halloween costume, which Mom forbids her to leave the house in.

The astronauts’ lives depend on high grade technology, but otherwise they might as well live in 1960, or even earlier. Their day has passed, it seems like, even when it comes to their job. The rest of the world has moved beyond moon landings. To their shock, their rocket launch isn’t even broadcast on TV. 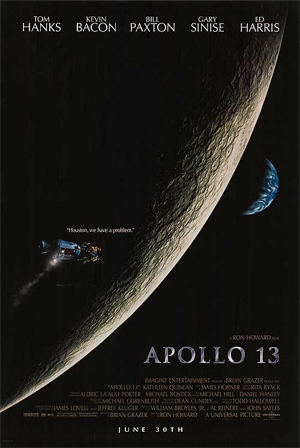 The story centers on Jim Lovell (Tom Hanks), experienced space traveler excited to bust his moonwalk-cherry when he gets bumped up to the Apollo 13 mission. He and Bill Paxton and Gary Sinise have been training their asses off in the simulator. This is dangerous shit, and the bosses aren’t sure they’re ready. There’s some real drama when Sinise isn’t allowed to go (they think he’s getting measles) and they have to replace him with Kevin Bacon, breaking up the team. Man, that must be rough being the new guy in a tiny space capsule. Worse than sharing a studio apartment with two guys you just met who grew up together.

But all goes well… until it doesn’t. A thing explodes (some kind of pipe or space machine part or whatever) and the mission is fucked. They definitely “lost the moon,” they can’t land, and they gotta figure out if it’s even possible to get back to Earth, which seems unlikely. As far as we see they don’t consider going out in a blaze of moon glory, though. They’re gonna give going home the old college try.

But first they gotta deal with moonus interuptus. They pass by it and stare mournfully. They got it even worse than poor, depressed Sinise, locked alone in his gloomy apartment drinking away his moonlessness. They got so close they could smell the green cheese.

Of course there is a certain unintentional humor in watching this in 1995, since we now know that the moon landing was a hoax and the moon-non-landing was also a hoax where they really did land on the moon. I am totally joking about both of those things and I hope no one is just skimming. It feels like a pretty old fashioned movie, but you can’t really understate the importance of the weightlessness in this. They shot the floating-around scenes in short bursts on a special plane that can create about 23 seconds of zero gravity (real astronauts use it for training). It gives them an impressive level of credibility.

I should also mention the score by James Horner, who of course died tragically young last week. This is actually the third movie of my Summer of 1995 retrospective that he scored, because he also did BRAVEHEART and CASPER. He definitely deserves credit for this one because it’s one of those scores that makes you feel like you’re at some military ceremony and should be standing up straight with your hand over your heart. Very appropriate for the material. And I like how the end credits break down the main theme with Annie Lennox singing it instead of a trumpet. They’re safe at home at that point, so you can loosen up a little.

This is a movie all about problem solving. How do we conserve energy and oxygen? How do we not overload on the carbon dioxide we’re emitting? If we can have enough power for re-entry, how do we even steer the fuckin thing? The astronauts have to keep their cool, not crack up, not flip out on each other, not freeze to death, get some sleep. They’re sharp guys. But the real heroes are down on Earth in mission control figuring out creative ways to solve all these problems. Ed Harris is in charge, a no-bullshit leader scaring everybody on task, and if I’m ever in need of rescuing I want this guy in charge. Either the character, or the actual Ed Harris.

But he’s mostly asking the questions. The answers are coming from the nerds who work for him, the engineers and what not (including, I noticed, Christian Clemenson, the guy who played Socrates Poole on The Adventures of Brisco County Jr.). They stew and debate and worry and come up with instructions for turning off most of the equipment, shifting the ballast, whatever. Their finest hour is when a bunch of them sit at a table with duplicates of the things the astronauts have on board and have to McGyver an adapter for a carbon dioxide filter made partly out of a plastic bag, the torn off cover of the mission manual and (of course) some duct tape. And then they have to talk the crew through reproducing it on their end.

Howard also milks the tension of the situation by frequently showing the astronaut’s families at home, huddling with loved ones on a constant vigil, friends and neighbors looking after them. He does it just the right amount to be heart-wrenching and not take away from the suspenseful science action going on at headquarters.

(Random note: one of the Lovell kids is played by Miko Hughes, aka the terrifying toddler zombie Gage in PET SEMATARY, and Heather Langenkamp’s Freddy-possessed son in WES CRAVEN’S NEW NIGHTMARE.)

Most of this drama is really effective. A rare misstep is in the scene where Lovell gets stressed out and tears off the wires that monitor his bodily functions. For some reason Howard plays it as a stick-it-to-the-man act of rebellion. The flight doctor panics when all the readings disappear from his screens, and Ed Harris and everybody laugh at him, like “Good for them, that’s showin ‘im!” Yeah, fuck that doctor for trying to do his job and use his expertise to try to keep the astronauts alive. What a stick in the mud!

Another thing that’s a little weird is that Kathleen Quinlan gives such a compelling performance as the wife left at home, trying not to give up hope, trying to comfort her children and elderly mother-in-law while her life is plummeting down a hole and the press are on her lawn wanting to interview her about it… but then we never see them reunited. There’s even a whole thing about her fear causing her to want to skip the launch, but then she shows up at the last minute. I know it’s for practical reasons – she couldn’t be there, they splashed down southwest of American Samoa, and they wanted to end with them just back to earth, not skip forward to later. But it feels odd that we don’t get to see that reunion hug.

Oh well. I have to admit that the part where she hears him over the radio saying he’s safe made me tear up. Thanks alot, Ron Howard.

One really satisfying subplot is the one about Sinise being dug up from the rock he crawled under to run scenarios on the simulator until they figure out a sequence that can conserve enough energy to make it back. He immediately comes alive, leaping from rock bottom to top form. He starts the day as the loser who didn’t get to go to space and ends it having done something much more important.

What is the importance of going to the moon? In what ways have the studies of moonrocks and shit benefited humanity? I don’t know. I don’t have that awe and automatic patriotism boner that alot of people have for astronauts. It’s cool, but I don’t really get it. That’s kind of what I like about this movie, though. It’s not about trying to get to the moon, it’s about trying to get back. An unexpected disaster strikes, and a team of smart people tough it out and don’t give up and work together to come up with a solution. It’s a very optimistic story to tell. It says we can do anything if we put our minds and our best and brightest to it. Maybe not solve the problem of Vietnam War, but other stuff we can do.

Screenwriter William Broyles Jr. continued an association with Tom Hanks, writing CASTAWAY and THE POLAR EXPRESS. (He also did ENTRAPMENT, the shitty Tim Burton version of PLANET OF THE APES, UNFAITHFUL, JARHEAD and FLAGS OF OUR FATHERS). His co-writer Al Reinert also contributed to the valley of the uncanny with FINAL FANTASY: THE SPIRITS WITHIN.

astronauts Bill Paxton Ed Harris Gary Sinise Kathleen Quinlan Kevin Bacon Miko Hughes Ron Howard Tom Hanks William Broyles Jr.
This entry was posted on Tuesday, June 30th, 2015 at 7:39 am and is filed under Drama, Reviews. You can follow any responses to this entry through the RSS 2.0 feed. You can skip to the end and leave a response. Pinging is currently not allowed.