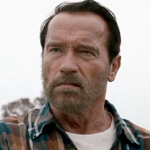 As you know I have a policy of seeing every Arnold Schwarzenegger, Sylvester Stallone or Jason Statham non-comedy theatrical release. This is an odd case because it also came out on V.O.D. and iTunes, and although I always prefer the theatrical experience I can see how this one will probly never play better with an audience, if there ever is one. It’s not just not a normal Arnold movie, and not just not a normal zombie movie, it’s also just very slow, quiet, uneventful and sad. It’s an indie drama, the gloomy kind, not the kind with all the sunny days and lens flares. It’s pretty much humorless and visually color-less. It’s not for everybody, or every mood. But I kinda liked it.
Schwarzenegger plays Wade Fogel (or Vogel I read, but I thought he said Fogel), just a humble small town guy, lives out on a farm, drives a rusty old pickup truck, is old friends with the local police and town doctor and everybody. I have no doubt that if push came to shove he could blow up a power plant and fake his death and go undercover in the mob like his character did in RAW DEAL, but that does not come up. He’s facing disease, a threat you can’t blow up or go undercover in. While his manliness does help sell a couple small scuffles this is not even kind of an action movie. THE ROVER is more of an action movie. This one is about his acting.

Shit is bad. “The necroambulance virus” has fucked up the world. There’s no power and farmers have been asked to burn their crops, but society has not completely collapsed. There are still hospitals and police and they work together to put people in quarantine when they get to a certain stage of the virus. As far as we see this is not a world where you go around scavenging – in fact, when Wade and his teenage daughter Maggie (Abigail Breslin… wait a minute, she already did ZOMBIELAND) stop at an unattended gas station he leaves money on the counter.

It’s also not a world where you go around hunting zombies. When Wade has to deal with some everybody blames the family of the zombies for not putting them in the quarantine. But he doesn’t feel good about it.

So this is what the story is about: Maggie has the virus. She got bitten. I think it happened two weeks ago and then she got upset and ran away but now Wade has found her. Maybe she ran away and then got bitten while she was gone, but that would be weird. And through his connections he’s able to get her let out of the hospital to come live her last days with him on the farm.

Obviously he wants to spend time with his daughter, but also he has a responsibility to society not to help the virus spread further. There is some tension with Maggie’s stepmother Caroline (Joely Richardson), who is not as sure about this decision, but tries to put on a brave face. The poor lady has to deal with the grossest parts of the infection, and keeps winding up in situations where there’s infected blood all over the kitchen. That fucks up at least one meal, a sensitive area since Wade and Maggie make fun of her allegedly bad cooking (I wonder if Arnold suggested including that ’80s staple?).

It’s not the only cliche in the script. Of course we get to hear about her sainted late mother, and how there was this book she liked to read her, and that was where her name came from, and somehow it never came up before. Also, it needs to be said that trying to find different approaches to zombie movies is even more played out than just doing traditional zombie movies. This idea of families protecting their zombie relatives has already been explored in Romero’s SURVIVAL OF THE DEAD and at least two major The Walking Dead storylines (Herschel’s barn in season 2 and the Governor’s daughter in season whatever). And by the way, first time director Henry Hobson did the title design for The Walking Dead.

But I also think this finds a new angle on it, makes it more personal. Schwarzenegger is really good in it playing a very relatable guy, one who doesn’t talk alot or express his emotions openly but is clearly, stubbornly devoted to his loved ones. It’s a movie about facing the inevitable and trying not to dwell on it too much. He just wants to be around his daughter and have dinner and stuff. Also he cries in one part. And he has a cowlick sometimes. And no neck tattoo like in SABOTAGE.

I mean, it’s a movie about him being sad. He’s the Grievinator.

Could a “real” actor have done a better performance? I don’t really think so, but if they could this is a good trade off because honestly the novelty of seeing Schwarzenegger in a movie so different from what he normally does is the main attraction here. That can’t be denied. But there’s no shame in that.

Still, to me the more original and effective parts of the movie are when it’s more in Maggie’s point-of-view. The movie really picks up during Schwarzenegger’s longest absence from the movie, when Maggie goes to the beach at night with some friends. She wears sunglasses to hide her whitening pupils and stays quiet during a conversation about the ethics of avoiding quarantine. The boy she likes is infected, he sits by himself with spidery veins showing through his skin and tries to explain to his ignorant friend what it’s like to face that choice. Despite the sort-of-genre-trappings it really captures the feeling of summers with friends in those fleeting teenage years and the tragedy of kids who never get a chance to see more of life.

Even better are the heartbreaking scenes where she says goodbye to her little stepbrother or her best friend and both parties sort of pretend it’s not the last time. Those scenes got me, I have to admit.

I’m sure you could read it different ways, but to me this seems like a story about terminal illness and dying with dignity. I think that’s why it doesn’t really try to mine our fear of contagion. The kids hanging out on the beach and Caroline in the kitchen, they don’t really freak out about germs, even though they logically should. It’s more about the other costs of this type of tragedy. I can understand the pressure it puts on Caroline and on the marriage. And I can understand why Maggie and some of the other people don’t want to go die in the hospital where you’re supposed to die.

I mean this is not as good as COMMANDO in my opinion but it’s got its own thing going.

confidential to the guy behind me in the theater: do not watch that Charles Bronson movie THE INDIAN RUNNER

Abigail Breslin Arnold Schwarzenegger Joely Richardson zombies
This entry was posted on Monday, May 11th, 2015 at 7:29 am and is filed under Drama, Reviews. You can follow any responses to this entry through the RSS 2.0 feed. You can skip to the end and leave a response. Pinging is currently not allowed.