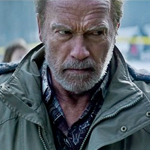 Fuck ’em. They’re wrong. Arnold in his late ’60s is still Ah-nold, but now with a little Charles Bronson, a little Clint Eastwood, a little former governor of California who’s paying for his mistakes but making the best of it. I like his old man action movies, especially SABOTAGE, and I hope he doesn’t give up on them. If there was a constitutional amendment that allowed him to run for president my main concern would be that we wouldn’t get any more of those. But I’m also impressed that he’s doing small dramas like AFTERMATH and MAGGIE, where he shows that yes, a guy with muscles and a thick accent can still do a very good, very emotional acting performance.

Here he plays Roman Melnyk, a construction worker excited for the impending arrival of his wife and pregnant daughter, who he’s even built a nursery for (note from movies: the more time you spend on a nursery, the more likely you will face tragedy). But when he goes to pick them up at the airport their plane has crashed – news he finds out in a torturously drawn out process of checking his ID, bringing him into a conference room, having him wait for another person to come in. He seems to wait with an “I’m sure it’s nothing” optimism rather than the sinking fear we have as we watch. 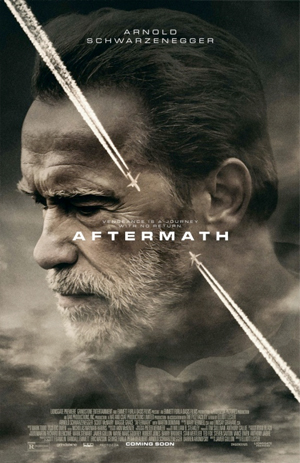 After he finds out, his behavior is a little worrisome. Hiding his identity he volunteers to comb the crash site, and is the one to find his wife’s body. Others find him cradling her. It’s heartbreaking.

The movie also follows this guy Jake (Scoot McNairy, KILLING THEM SOFTLY, ARGO), the air traffic controller on the job when the crash occurs. He makes a small mistake and then by looking at little blips on a screen realizes that he may have just killed hundreds of people. We go through the whole thing with him too, being informed of what happened, not believing what he’s hearing, wanting to know the number of how many people are gone because of him. And then being told he has to move away and change his name, like he’s in witness protection or something.

His perspective is arguably even more devastating than Roman’s. It’s hard enough to imagine losing your family that way, but trying to go on with life knowing that you had something to do with all those deaths, all those sad families, it’s got to be difficult. Even if he’s found to not be at fault, it’s not going to be much comfort to his mind late at night when he can’t sleep. Most people drive cars and have the potential to make a quick mistake that causes a loss of life. The guilt of something like that can at best be temporarily forgotten, and never erased. We see it tear Jake’s life apart.

Roman doesn’t want a settlement from the airline. He doesn’t want professional spokespeople who know how to talk gently to grieving people. He just wants somebody to make a small connection to him, look at him and honestly understand that he lost his family and tell him that they’re sorry. After much obsession he’s able to find Jake, show up at his door and try to make that happen.

This is based on a true story, and not knowing about it I was actually surprised by how that face-to-face went. Your mileage may vary.

In real life, the two planes crashed over Germany in 2002. Schwarzenegger’s character is based on a Russian man named Vitaly Kaloyev whose family died on one of the planes. He indeed volunteered to comb the wreckage and he found his daughter’s body in a tree. He was very offended by the company offering him payments for the loss of his loved ones, and hired a private investigator to track down the air traffic controller he blamed. And yes, he went to his house, showed him pictures of his family, and (SPOILER FOR THE MOVIE NOW) stabbed him to death. One difference is that he only had to do three years of his eight year sentence, and when he got home he was welcomed by cheering crowds and declared a hero, even got a job as deputy minister of construction.

Maybe that’s a cultural thing? The British director and Spanish writer of this American-British production don’t necessarily judge Roman, but they absolutely don’t condone what he does. The final scene, the aftermath of the prison sentence, is one part not at all from the true story but to me seems to be the whole point of the story. I’m a sucker for these cycle of revenge type stories, I even kinda liked TAKEN 2 for that reason. Roman had to talk to the guy who killed his family, now the guy’s family has to talk to Roman. Will they feel the need to stoop to his level?

Roman gets an emotional moment of truth where he realizes that he understands where this kid is coming from and can only accept it as an understandable response to the loss of a family member. For me all the dramatic cylinders were kicking in this conclusion.

This has Darren Aranofsky listed as a producer, but also DTV action kings Emmett/Furla, and I suppose the quality is somewhere in between there. Director Elliot Lester did the different and quite good Jason Statham movie BLITZ, based on the book by Ken Bruen. I remember that one being directed with more style than this one, although I’m glad there’s no drum and bass soundtrack here. Admittedly, like MAGGIE, I don’t think I would necessarily like this all that much if it were some other actor. Arnold’s presence elevates it. It’s nowhere near this good of a movie, but there’s even a little bit of that UNFORGIVEN meta-ness with the casting of Schwarzenegger, because for so many years we’ve watched him play characters who have no moral qualms about taking vengeance. In fact, Andrew Davis’s disappointing COLLATERAL DAMAGE (which came out less than a year before the real life crash) has a slightly similar premise: when his family is killed in a terrorist bombing he goes to Colombia to find and kill those responsible.

In AFTERMATH he faces the same grief, but with more complex repercussions to his actions. His stubbornness and tenacity are way less badass, much more tragic and self-defeating. And his wrath isn’t aimed at a vicious terrorist, but an innocent man who fucked up and has been paying for it and has his own family to worry about. And his mistake now is being too scared and guilty to face him courageously and express his remorse. But he doesn’t deserve to die.

If some day Schwarzenegger can combine this extra emotional depth and seriousness with the badassness of the old man action genre, and/or with a visionary director, I will be very happy.

Arnold Schwarzenegger Elliot Lester Maggie Grace revenge Scoot McNairy
This entry was posted on Wednesday, June 21st, 2017 at 9:30 am and is filed under Drama, Reviews. You can follow any responses to this entry through the RSS 2.0 feed. You can skip to the end and leave a response. Pinging is currently not allowed.