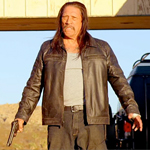 In the next scene he’s a cage fighter. It’s kinda funny in this day and age to see Trejo do fight scenes, because you expect a guy to do some moves, but he’s just a puncher like Charles Bronson. His opponent Jake the Tank says he has business to settle with him from San Quentin, but luckily Trejo gets in a good one and KO’s him. Very luckily, because Jake is played by mixed martial arts legend Kimo Leopoldo, the guy who carried a full-sized cross on his back when he entered the ring at UFC 3. I think it was genuinely meant as an expression of his Christianity, but it’s also a pretty good way to psyche out your opponent. I am about to fight a crazy motherfucker who carried a cross to the ring. After a long battle Kimo lost to UFC 1-2 champion Royce Gracie, but he wore him out so bad Gracie had to drop out of the tournament. No such problem for Bullet. Bullet probly could’ve been UFC champion I bet, but he’s too busy. 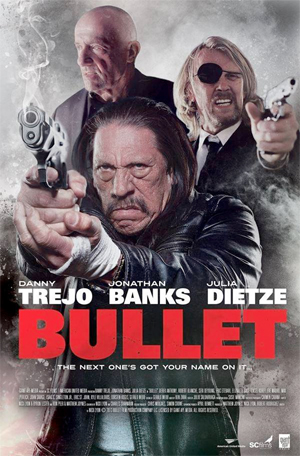 After the fight Bullet collects his money and the promoter guy (Gerald Webb of MERCENARIES and many other Asylum movies) tells him not to come back. Oh, don’t worry my man, he won’t be back, this is just a scene to establish what a badass he is. In my opinion almost all movies could benefit from throwing one of these on there. Let’s say, for example, THE THEORY OF EVERYTHING. Wouldn’t Stephen Hawking be that much more of an interesting character if, in one scene, he did an illegal fight for money? I don’t know but I do know if they had that in the trailer it wouldn’t have taken the Oscar nominations to get me to see that one.

Anyway, the box was right. Bullet’s a cop, he’s undercover, and he only fake shot those other cops as part of a trick to get Perlich to rat on his dangerous cartel bosses. (The cage fighting is sincere, though.)

Meanwhile we keep seeing this guy in prison, the son of a cartel leader about to be executed for killing three cops in a drug bust. I got confused because they describe it just like what we saw for setting up Perlich, I had to wonder was it trying to say that Bullet did the same trick on that guy and no cops were really dead? Especially when a lawyer asks to look over the files and Bullet says the files are in his head. Seems kinda shady. Seems totally shady, actually. The Justice Department should probly fire every character in this movie.

But it’s nothing tricky like that. Actually the cartel has kidnapped the governor (John Savage, DO THE RIGHT THING, BEREAVEMENT)’s daughter, forcing him to delay the execution.

Then we learn another new thing about Bullet. He has a daughter who’s a recovering addict. He goes to present her one year chip to her. He introduces himself as an addict too. And their relationship is a little strained, but he gets to spend time with his grandson Mario (Kyle Villalovos). And you know what that means: Mario also gets kidnapped. One of those double kidnaps.

So then it basically turns into Trejo’s version of TAKEN, even having him talk to the guy on the phone about how he’s gonna hunt him down. He has to go on his own, not use the police so they don’t kill the hostages, but then they force him to confess to Kane’s crimes, so the police arrest him and he has no choice but to work with them.

The main villain is the cartel guy’s dad, played by droopy-eyed Jonathan Banks from Breaking Bad and Better Call Saul. He’s a real good character actor who we’re probly gonna start seeing in alot more movies like this. His main henchman is Kruger (Torsten Voges, “Nihilist #3, Franz” from THE BIG LEBOWSKI), a long-haired German guy who looks about seven feet tall, like a beanpole version of Matthias Hues. I like how whiny-pissed off that guy keeps getting. And he looks more villainous after he abducts Bullet, ’cause then he has to start wearing an eye patch.

Way back when Robert Rodriguez first met Trejo on DESPERADO, he wanted to make him into an action star. “When I met Danny, I said, ‘This guy should be like the Mexican Jean-Claude Van Damme or Charles Bronson, putting out a movie every year and his name should be Machete.'” I imagine this is more like what he was thinking back then, a movie that follows all the cliches (from the cop who plays by his own rules and eventually throws down his badge so he can play-by-his-own-rules by his own rules, to the old friend who has become a weapons dealer who he goes to when he goes rogue, to a guy playing chess to represent masterminding some kind of a plan) and is willing to be ridiculous, but isn’t a bunch of wink wink nudge nudge cartoony wackiness with celebrity cameos. Director Nick Lyon did SPECIES: AWAKENING and some SyFy shit, and he doesn’t seem much more skilled than that implies, but he’s competent. It feels like a movie, which is not always guaranteed when Trejo is on the cover.

Rodriguez is actually credited as a producer here, but so are 8 other people, and I don’t recognize any of his influence, good or bad. Well, I guess in some ways this does seem like the serious version of MACHETE. Bullet has a similarly exaggerated awesomeness, and there is a lady agent as the co-lead similar to Jessica Alba’s character. There is also a slight hint of the “Mexploitation” swagger when he says “We’re in America. Speak Mexican, bitch!”

He’s got some other lines that made me laugh. He (inappropriately) sneaks up on a bad guy associate while she’s taking a bubble bath, sticks a gun to her head and says “Okay pretty naked lady. Where’s Kane?” Not proper procedure in my opinion. My favorite though is when he shows up at Kane’s art gallery, finds a bunch of dead bodies and says “Too late, obviously.” He sounds so sincere that I’m honestly not sure if it was meant as a joke, which is the best type of joke.

Another laugh like that is when Bullet shows up to kill a bunch of henchmen while they’re hanging out playing cards or something. That guy I always like to see pop up in movies, Noel G. (most recently seen as Hector in FURIOUS SEVEN) is there, and he was one of the guys who created a distraction in the park so somebody else could snatch Bullet’s grandson. Now, when Bullet starts asking where Mario is, Noel says “Ha ha, that’s what this is about, or what?”

No, motherfucker, it’s about a political disagreement. Of course it’s about you having just kidnapped my grandson and I’m trying to get him back. Jesus, Noel G.

To be honest I enjoyed (and remembered) at least the first MACHETE more than this. But at the risk of sounding like Goldilocks here I’d really like to see Trejo go somewhere in between the two. I want to see this “we’re actually doing an action vehicle, not making fun of one” approach with some of the crammed-full-of-gimmicks-ness of MACHETE. But anyway, I’m glad he gets to star in movies now. And I think it’s more than the one a year Rodriguez proposed.

Danny Trejo DTV Gerald Webb John Savage Jonathan Banks Kimo Leopoldo Max Perlich Nick Lyon Torsten Voges
This entry was posted on Wednesday, May 6th, 2015 at 11:30 am and is filed under Action, Reviews. You can follow any responses to this entry through the RSS 2.0 feed. You can skip to the end and leave a response. Pinging is currently not allowed.