Still, it was a surprise in 2009 when Zhang Yimou, director of gorgeous epics like HERO and RAISE THE RED LANTERN, took on the Coen Brothers’ lean neo-noir debut BLOOD SIMPLE. The dry, dusty tale of adultery, murder and dumb mistakes becomes a period Chinese story with broad comedy elements. It’s weird and not entirely successful, but interesting to a fan of this type of cultural outreach. 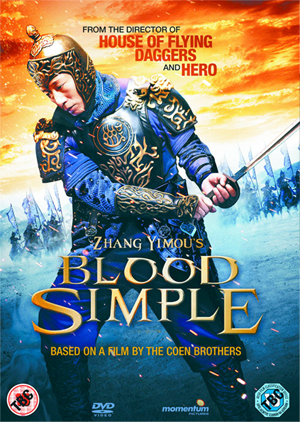 The lead woman “Wang’s Wife” (Yan Ni, TRUE LEGEND) is more controlling and assertive than Frances McDormand’s character in the original, and her extra-marital boyfriend Li (Shen-Yang Xiao, THE GRANDMASTER) is much more talkative than John Getz’s character, and with none of his masculinity.

(By the way, how come I’ve never noticed John Getz in a single other thing? He’s the lead in a movie I’ve watched over and over again, it looks like he’s in a million tv shows, but I never once said “Oh shit, that’s Ray from BLOOD SIMPLE!” I’m sorry, John Getz. You deserve better.)

Ray was macho and stoic, this guy Li is a hyperactive cartoon running around comically scared and wearing an undeniably girly pink robe. I wonder if this is a hint that she doesn’t want to be with a man at all? If so I guess she’ll never be happy, but she at least wants to get out of her arranged, abusive marriage with the disgusting noodle shop owner Wang (Ni Dahong, CURSE OF THE GOLDEN FLOWER).

Wang is the one character who seems like a straight up ancient China analog to the original. He has a similar quiet, frowny demeanor to Dan Hedaya, sits in a similar cellar-like back room office. But Zhang (Sun Hong-Lei, DRUG WAR), the guy who he hires to kill his wife, is nothing like M. Emmett Walsh’s sweaty, blabbering private eye. He’s a soldier working for a commanding officer who rounds up and executes alleged adulterers, so it’s significant that he takes a guy’s money to murder a cheating wife, then turns on him instead. Rather than the sleaziest guy in the movie he kind of seems like the most reasonable. But he’s scary, sneaking around silently, trying to bury the body, cover the tracks, steal the money.

This takes place in a time and place when not everybody has guns, it’s kind of a drastic step to get one. And it’s a much bigger deal, it’s a new technology that has to be explained to them by a foreigner. Just having it is a serious crime, and there are scenes all about hiding it and trying not to get caught with it. So she better be serious about wanting to use it.

It starts out so different from BLOOD SIMPLE I know it would’ve taken me a while to figure out what it was based on if I didn’t already know. But it has some nice little nods, including shots of the desert landscape setting the scene much like the Coens did with fields and dark roads. And you come to realize that just the lack of headlights and yellow lines on the road is enough to change the whole tone of the thing.

I like comparing and contrasting the two versions, enjoying the differences, but in my opinion they messed up in the way they changed the classic punchline to the movie. Yimou faithfully re-stages the final chase with the hired killer pursuing her, unseen, and the thing where he’s on the other side of a wall and she impales his hand, so he can’t get in. In BLOOD SIMPLE he shoots through the wall and you see holes appear, letting in light. Yimou does the same thing but with sword stabs.

That’s beautiful, but the Coens’ great joke is that she yells at him, “I’m not afraid of you anymore, Harry!” And the P.I. starts laughing at the absurd realization that this whole time she thought he was her husband, who he already killed. In this one the wife sees her attacker’s armored arm and knows he’s not her husband, so she says to tell her husband that she’s not afraid. Similar, but not as good. Some of these things get lost in translation. (Or maybe it works but not when you see it with English subtitles.)

But it’s not just an inferior BLOOD SIMPLE, it does stand as its own movie, for better or worse. The costumes are full of brilliant colors that pop out in front of the rock, dirt and sky backdrops. There are some armored soldiers marching around, giving it the feel of a historical drama. The characters are very broad, especially these two knuckleheads seen on the right here, who don’t really have an equivalent in BLOOD SIMPLE, and seem like they coulda been adapted from some children’s cartoon show we don’t have here. 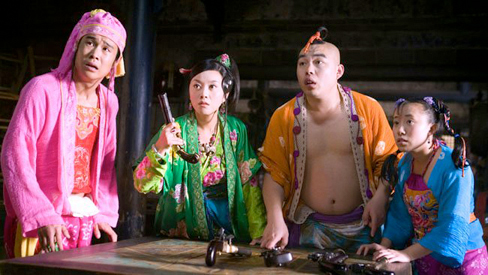 And there’s a great scene about the spinning of noodle dough. It’s like spinning a pizza meets kung fu demonstration, and the thing gets so big it might be a special effect but I’m honestly not sure. They didn’t get that part from the Coen Brothers.

A WOMAN, A GUN AND ETC. is okay. Not good enough that I’m gonna put it in the rotation to watch every several years like I do BLOOD SIMPLE, but not bad enough to put me off noodles. Noodles are still delicious. This review is dedicated to all the noodles. Thank you for your service.

Coen Brothers remakes Shen-Yang Xiao Sun Hong-Lei Yan Ni Zhang Yimou
This entry was posted on Wednesday, July 16th, 2014 at 2:53 pm and is filed under Crime, Reviews. You can follow any responses to this entry through the RSS 2.0 feed. You can skip to the end and leave a response. Pinging is currently not allowed.

7 Responses to “A Woman, a Gun and a Noodle Shop”