At first I wasn’t even gonna see 127 HOURS, ’cause what’s the point of doing another one if Nolte and Murphy don’t come back? Those movies were all about the chemistry of those two guys. It doesn’t make alot of sense to replace them with a different character. But it was a bold move to not make it a buddy movie, or a cop movie, and base it on a true story about a guy who went hiking and got his arm stuck under a rock. Alot of people will say that’s just a rehash of parts 1 and 2, but I would argue that there are subtle differences. 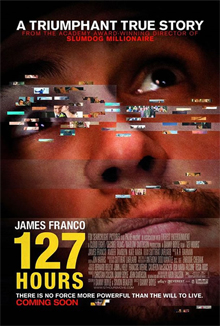 The story’s simple: James Franco is an adventurous young dude in Utah, he likes to go on spontaneous day trips out into the nature and what not. He knows the area well, including secret caves and hard to climb ridges. He has plenty of equipment and confidence, but should probly be a little more careful, ’cause this time out he slips and the rock falls on his arm and he’s going nowhere and there are no human beings within miles. Another good title for it would be FUCKED.

Sounds horrifying, and it is, but what surprised me about the movie is how director Danny Boyle is able to have the ol’ gallows humor about it and keep things light enough to be bearable. Franco played nothing but brooding handsome guys in movies for several years, but Seagalogy introduction writer David Gordon Green knew about his likable, humorous side and showed it off in PINEAPPLE EXPRESS, and that seemed to free him up. 127 HOURS depends on that side of Franco. Watching this movie with Son of Green Goblin James Franco would be a fuckin chore, but with this guy it’s do-able. Even when the accident first happens it’s not two minutes of screaming in horror and pain. Instead he’s in shock and it’s more of an “oh, you’ve got to be shittin me” reaction.

Throughout the ordeal he makes fun of himself. Even as he’s losing it (and trying not to) he uses his camcorder to record a sarcastic interview with himself. His attitude makes a grueling movie less torturous and and gives you the impression that he’s such a positive guy he had to survive this, and if he wasn’t like that he never would’ve made it out. (SPOILER.) This is a guy who, when he finally got loose after 5 days, took a moment to turn back and take a picture of the place.

Boyle doesn’t go the minimalist route. This guy really is stuck in this crevasse for most of the movie, but the camera’s not always stuck with him. It floats away and retraces his steps back to the car to show where he stupidly left his Gatorade. It zooms through his straw to get an intimate view of his last drops of water, or of the urine he unfortunately finds himself drinking later. (Out of desperation. I don’t think he’s into that.) It wanders away with his memories of childhood and ex-girlfriends, his fantasies of how people will notice he’s gone, or what would happen if he went to the party some girls he met invited him to. They told him where to go and to look for a giant inflatable Scooby-Doo, so at one point he hallucinates a Scooby-Doo doll in the cave doing a Scooby-Doo laugh. So this is different from a survival movie like THE PIANIST or something. 100% more Scooby-Doo laugh.

It’s hyperactive filmatism, but the kind where it illustrates its concepts clearly instead of just trying to confuse you into thinking it’s stylish. Take for example the opening montage of the city: flashy splitscreens of huge crowds, city life, fast food signs. It comes across like a music video, but it makes its point eloquently. This is the noise and clutter and crowds and cookie cutter strip mall culture that he wants to get away from, that makes it so desirable to stand out on a sunny rock miles away from any buildings or roads. It shows why he would want to go way the fuck out there, but also shows how isolated he is now that he’s stuck under that rock, away from where the people and the hamburgers are.

By now you’ve probly heard what he has to do to get out of there. Hint: he doesn’t tie a bunch of helium balloons to the rock to lift it. It’s just a horrible fucking thing to think about, and Mr. Boyle does demand that you do think about it. First you have to dread it, then you have to watch as he tries to figure out how to do it. There are some failed attempts. And keep in mind he does not have the proper tools. It’s not easy to do, and it takes a while. I’m glad it doesn’t go into more detail than it does. But jesus.

Still, there are more pleasant moments that are almost as memorable. I really like the scene where the sun comes up and he gets to enjoy the feeling of it warming his skin. The guy has every reason to be Mr. Grumpypants, but he’s able to enjoy the small things in life.

There’s alot of things you can read into this. It could be about the youth culture being too self absorbed and stuck-in-the-present. If the fucker would be careful and tell people where he’s going maybe he wouldn’t have this problem. And there’s an alternate ending where he later tries to get back together with the ex-girlfriend, but she can’t do it and tells him something like “Every time you go out there the people who love you feel like a little piece of them dies.” But it’s too heavy-handed, I’m glad they didn’t use that one. I mean, this is a real guy, why rub it in more? I’m pretty sure he knows the errors of his ways.

(That alternate ending is really interesting though, ’cause it’s the whole last chunk of the movie but with a whole bunch of subtle variations, like the sound mix is different so you can hear what the people who find him are saying. It really shows you how many hundreds of tiny things could be done differently and completely change the movie. It must be hard to decide which combination of choices is the best.)

I finally got around to seeing this because it was one of the best picture nominees. I think it’s a good movie, but might not’ve figured it for one of the ten best of the year. Of course it didn’t win and that was a week ago and I could’ve just not reviewed it. But there’s one scene in there that has really stuck with me and made me want to write about it. It’s a musical montage scene, this one set to “Lovely Day” by Bill Withers. He wakes up in the sun and we hear the song and of course my instinctive response was “Bill Withers! I like this song.”

And I associate that music so strongly with enjoying a nice day that I almost take it at face value, like this poor thirsty bastard is really enjoying himself. But of course his lovely day is spent trying to rig a pulley system to pull a rock off of his crushed arm so he won’t starve to death.

“When I wake up in the mornin’, love / And the sunlight hurts my eyes / And somethin’ without warnin’ love / Bears heavy on my mind. / Then I look at you / And the world’s alright with me / Just one look at you / And I know it’s gonna be… a lovely day”

Such a beautiful song about the presence of a loved one making everything better. But this guy doesn’t have anybody to take one look at. And he broke it off with his girlfriend, even if he was at home he’d have no one.

But the music is so good, so sincere, it’s hard to take it as sarcasm. Maybe it’s about his love for himself. He’s having a lovely day with himself. If he didn’t dig himself so much he’d give up and pass out until the ants eat him.

The use of that song is so sad and mean and, I have to admit, kinda funny. It’s a great scene in a good movie.

Bill Withers Danny Boyle James Franco survival true story
This entry was posted on Monday, March 7th, 2011 at 3:40 am and is filed under Drama, Reviews. You can follow any responses to this entry through the RSS 2.0 feed. You can skip to the end and leave a response. Pinging is currently not allowed.