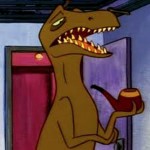 WHAT THE FUCK DID YOU THINK, asshole. They’re pimps! That’s what they do, they pimp. Jesus fucking christ you fucking backseat documentarians. 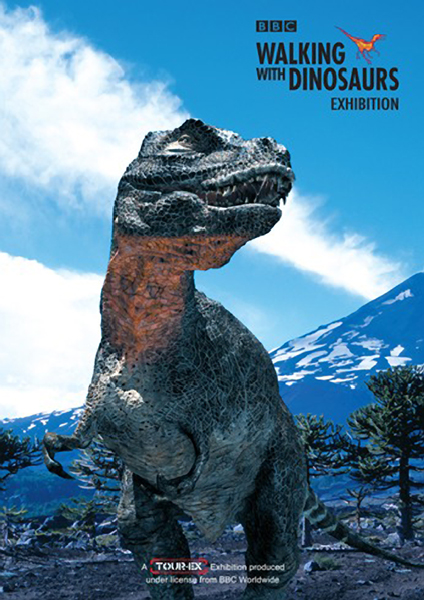 Anyway yeah this one isn’t a documentary so the complaint on this one is gonna be, “I don’t get it. They didn’t have video cameras during the jurassic period, or for that matter the fucking cretacious. Why can’t hollywood get a fucking CLUE about the historical accuracy.” Because the concept here is that they made a wildlife documentary, like you’d see on national geographic or something, but about dinosaurs. The dinosaurs are created through the usual computery type creations as well as some big rubber puppets or some type of deal like that, not sure.

Now the computering here does not always look 100% real or quite as good as the Jurassic Park film series, however it is very well done and it is easy to suspend disbelief. The lighting and what not is so realistic that you really start to forget they are big fat lie and phony. You get involved in their lives. There is an assload of detail into the behaviors of all the different dinosaurs. Right down to which ones eat which, which ones eat their young, what noise they make when they mate.

There are characters and storylines in this series that will break your damn heart. There is one episode all about this giant flying dinobird. In the opening scene, he is a corpse rotting on a beach. Then the episode flashes back to tell the story of his last migration, and how he ends up not being able to mate and wears himself out trying to attract a female, then stumbles along the beach and passes out from lack of food and then dies and then the babies that the other men were able to make get born and eat the poor motherfuckers eyeballs out.

What I’m trying to say here is that it’s better than land before time.

The series is all treated very seriously but it goes into SO much detail that you start laughing and wondering, are they just making this shit up or what. But apparently they really have all this dinosaur bone evidence that shows them that dinos would fight over food but would not want to risk an injury so the loudest roar would end up winning the fight, and also that the big dino birds would get jealous that the smaller dinobirds were getting the fish so they would headbutt them and make them drop their fish and then fly down and catch them, and etc.

The narrator is Kenneth Branagh, and I’m not sure but I bet he kept taking his shirt off during the recording sessions. And then he was probaly reading all these rave reviews of Titus and crossing out Julie Taymor’s name and scribbling in his.

Anyway this is a great show, I thought I would only watch one or two episodes but I got addicted and had to watch the whole thing. I especially like it in the couple parts where they make it look like a handheld camera. My one complaint is that they never had a cameraman running away. That would be funny if one of the dinosaurs attacked the cameraman. And not to give anything away but at the end there is a comet that kills all the dinos. I wish they would have studied some hurricane footage or something and made it look like that.

But I mean really people, this is the most entertaining dinosaur show that will ever be made, I never thought I would enjoy this type of shit but believe me people you will love this.

dinosaurs
This entry was posted on Tuesday, September 26th, 2000 at 8:43 am and is filed under Cartoons and Shit, Documentary, Reviews. You can follow any responses to this entry through the RSS 2.0 feed. You can skip to the end and leave a response. Pinging is currently not allowed.