And then in between are interviews with many of the people involved with movies. All kinds of interesting people, mostly b-movie legends: Michael Pare, Sergio Martino, Vernon Wells, John Hillcoat, Albert Pyun, Dale “Apollo” Cook, Ted Prior, Brian Trenchard-Smith… but I’m most impressed that he interviewed really obscure people that you’d never think you’d see an interview with. For example he talks to the writers of KNOWING and CLASS OF 1999, two pictures I’m very fond of but wouldn’t have even been able to name the writers of. 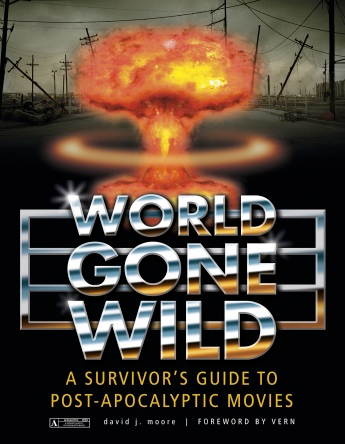 This is a treasure trove here. I’m still going through it and discovering new things. So far maybe my favorite is an interview with Trenchard-Smith. Not the one about DEAD END DRIVE-IN (although that’s a good interview) but the one about MEGGIDO: THE OMEGA CODE 2. He’s hilariously candid about working for a Christian fundamentalist production company while not believing in the ideas they’re trying to promote – even bluntly saying that one of the things the movie is warning against would be the best thing that could happen to the world. He says that the company didn’t have a problem with him being a non-believer, hinting that following such policies is the reason other Christian exploitation franchises end up starring, uh, Kirk Cameron.

One quirk about david’s book is that his tastes aren’t very predictable. For example he gives a lukewarm review to CHILDREN OF MEN, and then spends pages and pages interviewing Neil Marshall about the fucking execrable DOOMSDAY (okay, I guess I’m alone in hating that movie, but I really hate that movie so it’s noticeable how much space he dedicates to it). He gives a great review to A.I. – ARTIFICIAL INTELLIGENCE, which is refreshing, because I’ve been seeing that movie get unfairly shat on for more than a decade. But then he says he thinks it’s Spielberg’s best film, and even I gotta part ways there.

I teased david a little bit about this when I met him at the Cinefamily Seagalogy night, but that was before I got to his review of DR. STRANGELOVE, in which he claims the movie is not funny! There is a purity of essence missing from this viewpoint. Most people can’t expect to agree with him on most of this stuff. But I genuinely like this about the book, it keeps you on your toes.

Also, check out that foreword. What an amazing foreword! Whoever wrote that thing deserves a raise. I have been hearing that it’s worth buying for the foreword alone. I believe that was on NPR or myimagination.com or somewhere that I heard that. Or maybe it was mentioned in somebody’s TED talk? I forget. But “World Gone Wild Foreword Fever” is pretty much the trend of the summer, celebs swear by it says Entertainment Us Weekly.

As far as the actual content of the book after the foreword, I’ve got alot left to read and I’ve already learned about a ton of promising movies I’ve never heard of, and have been given incentive to re-watch some I haven’t seen in forever. david obviously has a passionate obsession for these films, that’s why this book was possible, and why it’s so great. It’s also heavily illustrated, and not surprisingly many of the posters and photos are credited to the author’s collection. He also screened a rare 35mm print of STEEL DAWN starring Patrick Swayze as part of the book’s release. He’s from our tribe. I’m surprised he wasn’t wearing spiked football shoulder pads when I met him.

WORLD GONE WILD: A SURVIVOR’S GUIDE TO POST-APOCALYPTIC MOVIES is published by Schiffer. Here’s the official page for it.

And I suppose after you order the book our weekend topic of discussion should be favorite post-apocalypse movies besides the MAD MAX trilogy.

books david j. moore post-apocalypse
This entry was posted on Thursday, July 10th, 2014 at 11:29 pm and is filed under Blog Post (short for weblog). You can follow any responses to this entry through the RSS 2.0 feed. You can skip to the end and leave a response. Pinging is currently not allowed.