So there are around 30 spaghetti westerns (and one Tarantino movie) that use the name “Django,” but none of them are official sequels except 1987’s DJANGO 2: IL GRANDE RITORNO, aka DJANGO STRIKE AGAIN or DJANGO RIDES AGAIN or D2ANGO. Franco Nero returns as Django. Sergio Corbucci was supposed to return as director, but backed out and just got a story credit. The director is Nello Rossati, who doesn’t seem to be a big name director but did direct a movie called DON’T TOUCH THE CHILDREN!

I guess for a short period before this there was sort of a spaghetti western revival in Italy, but this one seems more inspired by the vibe of the ’80s American action movies like RAMBO: FIRST BLOOD PART II. What better time than 1987 to bring back the western character with by far the biggest gun? It’s even the same year that Jesse Ventura used that helicopter gun in PREDATOR. It was in the air.

This is a movie in favor of the old men. It opens with some old men who get laughed at, but they’re the only ones who remember the guy with the machine gun. Can’t even remember his name at first, but they figure that’s the guy they need to straighten things up around here. 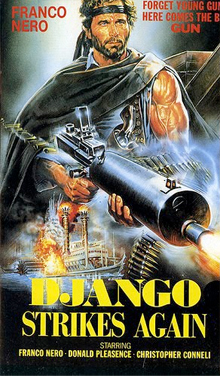 Now we know for sure Django wasn’t the guy in all those unofficial sequels, because he has an alibi. After avenging his wife he went and joined a monastery, didn’t believe in violence – probly gave Rambo the idea for his part 3. But there’s some missing time there because at some point Django also fell in love and had a daughter, and the daughter has been kidnapped.

Once again the villains are some racist assholes, this time also very rich. The movie takes place next to a river, and this guy El Diablo (Christopher Connelly) comes by with a boat full of slaves. The weird thing is that almost none of the slaves appear to be African – I guess they couldn’t find too many black extras in Colombia, where they filmed this. The exception is his badass female bodyguard, who wears what appears to be a traditional African look and looks a little bit like Pam Grier when she was really young. This woman is totally sadistic and seems to get off on doing Diablo’s dirty deeds, but also is very jealous and recognizes when she’s being disrespected and wants to avenge that. A great sub-villain. Give that lady a promotion.

But her boss is a good villain too. He’s kinda prissy, and obsessed with collecting butterflies. I mean, how is a guy who’s been through everything Django has been through even supposed to comprehend that? You collect butterflies? Delicate little bug corpses? But Django uses it against the guy, forging a rare black butterfly to get to him.

El Diablo is a total sicko, but I guess so is everybody else around here. At one point there are Mexicans on the shore and he has his men throw a woman into the water for them. They fight over her like she’s a t-shirt shot into the crowd at a sporting event. Just shameful for everybody involved, in my opinion.

Django is captured and enslaved in a mine, where he becomes buddies with Donald Pleasance (I mean, why not? As long as he’s there) and then escapes by rolling down a hill inside a big metal vat.

Everybody thinks Django is dead, they’ve even seen his grave. Well, that’s ’cause he wasn’t fucking around in part 1, he really did do what he said he was gonna do and buried Django, which means his old life as a killer as well as his super fuckin awesome machine gun which was used for I’d say a good 95% of the huge amount of killings that he did. And is still in working condition when he digs it up.

Of course the gun made the action in the original DJANGO more crazy than most westerns, and this being ’87 it’s even crazier. He goes around in a funeral carriage, puts a grave full of dynamite on somebody’s doorstep, sneaks around taking out guards like a ninja, lets a little kid fire the gun at people, hangs a guy out a window and makes him smoke a stick of dynamite like a cigar, blows up a whole bunch of buildings, shoots guards out of towers…

In my opinion Django’s ’80s look is not as good as when he was younger. He looks much more muscular, which is okay, but the long hair is overdoing it. And the headband. He’s more like a generic muscleman in a RAMBO or COMMANDO rip-off and less the iconic old west reaper that started the legend.

Not a big deal though. It’s a bigger problem that the music and style lean more toward jungle-set ’80s b-action than spaghetti western. But it’s an interesting hybrid. I like that it exists. Not essential, but good to see once.

Donald Pleasence Franco Nero spaghetti westerns
This entry was posted on Tuesday, July 10th, 2012 at 12:35 pm and is filed under Reviews, Western. You can follow any responses to this entry through the RSS 2.0 feed. You can skip to the end and leave a response. Pinging is currently not allowed.