So there are around 30 spaghetti westerns (and one Tarantino movie) that use the name “Django,” but none of them are official sequels except 1987’s DJANGO 2: IL GRANDE RITORNO, aka DJANGO STRIKE AGAIN or DJANGO RIDES AGAIN or D2ANGO. Franco Nero returns as Django. Sergio Corbucci was supposed to return as director, but backed out and just got a story credit. The director is Nello Rossati, who doesn’t seem to be a big name director but did direct a movie called DON’T TOUCH THE CHILDREN!
END_OF_DOCUMENT_TOKEN_TO_BE_REPLACED

Django is a little more demonic than most of your spaghetti western anti-heroes. Obviously those guys are never fuckin Roy Rogers. They’re dirty and scary and sometimes even the titles of the movies are trying to warn you about them (GOD FORGIVES… I DON’T!, RUN, MAN, RUN!, IF YOU MEET SARTANA PRAY FOR YOUR DEATH, GO AWAY! TRINITY HAS ARRIVED IN EL DORADO, etc.). But this guy Django…
END_OF_DOCUMENT_TOKEN_TO_BE_REPLACED 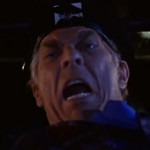 Think about it: the stoic Clint Eastwood persona of A FISTFUL OF DOLLARS, which he parlayed into an entire brilliant career and which spun off into a hundred bastard sons in the action genre, from Steven Seagal to Daniel Craig. The epic cinemascope wide shots showing the vastness of the desert, cutting to the extreme closeups on some ugly bastard’s squinty eyes, surrounded by wrinkles and lines of sweat. The ingenious use of sound – buzzing flies, some piece of metal somewhere clanging in the wind, the clicking of guns, and of course the legendary Ennio Morricone scores that are forever glued to any memory anybody ever had of these movies. Leone’s style is like a drug, it heightens all your senses. You feel like a blind man whose hearing becomes more powerful to balance out the loss of the eye sight, but then you get the eye sight back for some reason and the super-hearing stays so you go watch some westerns. END_OF_DOCUMENT_TOKEN_TO_BE_REPLACED