Django is a little more demonic than most of your spaghetti western anti-heroes. Obviously those guys are never fuckin Roy Rogers. They’re dirty and scary and sometimes even the titles of the movies are trying to warn you about them (GOD FORGIVES… I DON’T!, RUN, MAN, RUN!, IF YOU MEET SARTANA PRAY FOR YOUR DEATH, GO AWAY! TRINITY HAS ARRIVED IN EL DORADO, etc.). But this guy Django…

Okay, so Franco Nero is obviously channeling Clint with his quiet cool and ragged face, sitting in the saloon unconcerned, only pulling his brim up to grimly squint at people who yap at him for too long. But he looks more hellacious than Clint because he’s bigger and he’s wearing a black coat. And because he’s dragging a coffin.

That’s right, this is the movie cowboy who drags all his shit around like a bag lady. When somebody asks him who’s in the coffin he says “Django.” The villain jokes with him about it, like oh good, you came prepared. You brought the coffin we’re gonna put you in. But that guy probly knows deep down that it’s a threat and he should be afraid. 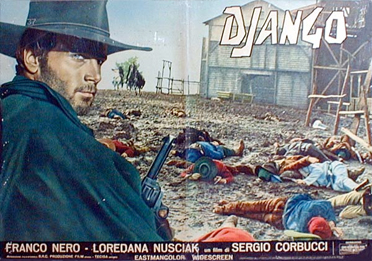 Yeah, the good guy’s kinda creepy, but the bad guys he’s taking on, led by Major Jackson (Eduardo Fajardo) are a full-on cult. They do the usual Western banditry and pillaging, but they wear red masks, use red scarfs to tie people up, it’s ritualistic. The innkeeper even says it’s like a religion. I guess they’re supposed to be white supremacists, kind of Ku Klux Klansian, but they only have Mexicans to mess with so it comes across like a border war. I’m sure in the modern day they’d be building a fence.

Anyway, back to Django. I bet now days you wouldn’t be able to bring a coffin into a bar with you, even if the place has a coat check. In that sense the Wild West days were more lenient. He sits down at a table, just has it on the ground next to him, nobody says anything.

But we know Django’s far from the most evil guy here because he rescues Maria (Loredana Nusciak) after she’s been tormented by both the Mexican bandits and Major Jackson’s men. The cultists take the cake because they try to burn her on a cross! I think just because she’d been whipped by Mexicans before they got there. That’s how racist they are.

After the rescue Django sticks around, as if daring these guys to retaliate. It becomes clear that he didn’t drift into this town by accident. His plan is a mix of badass confidence and clever maneuvering. He gets into it with Major Jackson in the saloon and shoots a bunch of his men, but says it was an uneven matchup. He gets Jackson to admit how many men he has left (48) and arrogantly tells him to bring them all next time to make it fair. He also proves himself a powerful cork-spitter and seems to be concerned for the health of the vultures that eat the dead bodies around here. I think he’s probly just joking, though, so I won’t count it as badass juxtaposition.

Is it suicide? No, it’s a trap. He lures that 48-man army to the saloon, where he waits behind a log that looks like a bone, then opens the coffin and gets out (SPOILER) his big ass machine gun. It’s the Old West Ol’ Painless. In a way it seems like a cheat. Couldn’t anybody be the best gun-slinger if they got a hold of that monster? Well, yeah, but Django also has the balls to do it, and the ingenious planning to take it a couple steps further. Jackson is the target of his revenge – killed his wife, obviously – but he keeps passing up chances to kill the bastard. See, if Django kills the major now he can’t steal all the gold his men are about to transport.

I guess we also gotta give Django credit for getting that coffin around, sometimes with the gun in it, sometimes with the gold. That thing’s gotta be heavy and cumbersome even when it’s empty, but he totes it around on his back, climbs out windows with it, walks across ledges. He’s good. He’s a Transporter.

And just in case you still think it was dishonorable to use such an overpowering weapon, he makes up for in spades at the end. Not only does he not have that gun, but he gets both hands crushed under an enemy’s rifle butt. He has to use his teeth to remove the trigger guard and painfully struggle to balance a pistol on his wife’s tombstone, where he waits for his showdown. You can’t say it’s effortless.

I’m glad something inspired me to watch this again. It’s alot better than I remembered. The man dragging around the coffin he plans to bury his old life in, the woman he saved trying to save him from being dragged into quicksand by the coffin full of gold… I love a western so full of mythic symbolism. Props to the theme song, too. Is it just me, or would that’ve made a good song for Elvis to sing?

One tip: I watched this on DVD because it was a double-feature set with the sequel, but this version only had the English dubbed soundtrack, and Django’s voice is not very good. So I recommend springing for the blu-ray or another edition that has the Italian language track.

Franco Nero Sergio Corbucci spaghetti westerns
This entry was posted on Monday, July 9th, 2012 at 11:22 am and is filed under Reviews, Western. You can follow any responses to this entry through the RSS 2.0 feed. You can skip to the end and leave a response. Pinging is currently not allowed.