I never heard of this one until the good ol’ Criterion Collection put it out a few months ago. I was intrigued by the title, which seems to indicate that it is about a trio of samurai who are each outlaws of some kind. And it’s a well-chosen title because that is exactly what it’s about.

It’s a Japanese picture from 1964, so it’s shot in beautiful black and white. It’s the directational debut of Hideo Gosha, whose next movie SWORD OF THE BEAST was also released by Criterion. The story involves three elderly peasants who kidnap the magistrate’s daughter and keep her hostage in a mill. Shit is real bad for the 8 clans in the area and the magistrate won’t listen to their appeals so they got desperate. Some JOHN Q type shit.
You don’t know at first who the titleive three are gonna be, but the first samurai in the story is Sakon Shiba (Tetsuro Tamba), a ronin who comes across the mill looking for a place to crash and accidentally intrudes on this crime. The peasants try to get him to leave, but he has a sword and insists on staying and sleeping. He seems kinda amused by their amateurishness but also charmed by their cause and can’t help but give them advice and taunt them into not giving up.

He’s already in trouble being in the presence of kidnappers and not doing anything, then when the magistrate’s men come on a rescue mission he actually finds himself fighting them off. So now he’s in it. He’s outlaw samurai #1. 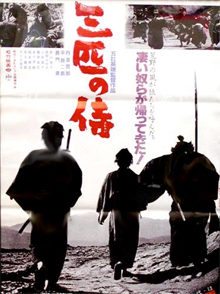 Well, the magistrate’s gotta get his daughter back, but the first try didn’t work because of this samurai. They don’t want to send anybody good, so they remember they got this one “country bumpkin” samurai in a jail cell. He’s a murderer but a goofball who wants to stay there for shelter. They test him and he steals a guy’s sword so they hire him to go on this mission to kill the samurai in the mill. Also along on the mission is another samurai who doesn’t really want to get involved but just likes hanging out at the magistrate’s pad to eat his food and drink his wine.

When the country bumpkin finds out that the kidnappers are peasants and why they took the magistrate’s daughter he immediately feels bad and quits to join their side. The other guy won’t join him, because he wants to stay and keep having the wine, but he also doesn’t really give a fuck so he doesn’t stop the other guy from switching sides.

Of course, the conflict escalates. Three killers called The Gods of Death get sent in. For a minute I thought wait a minute, these aren’t the three outlaw samurai, are there? Because there were three of them. They’re a colorful threat reminiscent of the three brothers from LONE WOLF AND CUB 2.

There are many reasons why this is a great samurai movie. One of them is stylistic. It has a whole bunch of really cool camera moves and zooms, something unexpected at this time and in this genre. There’s even a couple connected camera moves to look like one shot that goes from outside into a building, almost like a precursor to the EVIL DEAD demon-cam thing.

More importantly I really like the themes of this story. It’s got a whole 99% thing going on, the desperate peasants rising up against the negligent rich people who control their lives and live off their labor. In one great scene the peasants selflessly give up their last cup of porridge to Shiba, to thank him for his help. Then he feeds some of it to the kidnapped girl. At first it seems like he’s giving up his share to be less cruel to the hostage, but she gags at the taste of the porridge and it turns out he’s trying to show her the disparity going on in this society. Most of the people can barely even afford a food that’s too disgusting for her to eat.

The giving up of the porridge is part of the other big theme of the movie, the cycle of sacrifice, the paying it forward type shit. The peasants will risk their lives to help their clans, so the samurai will risk his to help them, so they will give up their food for him, so he will allow himself to be punished in their place, so the girl will want to help him, etc. The daughter is of the upcoming generation so it’s not too late for her, but the adults above her have no honor, they can’t even be trusted to stick by a Promise Between Samurai. So fuck those people.

And on top of all that this is just a good story with likable (and hatable) characters, some good sword fights here and there, and good suspense as you hope for who is gonna become an outlaw and when. It left me wishing for more Three Outlaw Samurai adventures, and apparently there were some. This was made as the origin story for a TV series. I doubt I’ll ever see that, so I will assume they’re still walking down that road together, always finding some more honorable trouble to get into.

Criterion Collection samurai
This entry was posted on Wednesday, July 11th, 2012 at 1:32 am and is filed under Action, Reviews. You can follow any responses to this entry through the RSS 2.0 feed. You can skip to the end and leave a response. Pinging is currently not allowed.