I’m starting to feel like a pushover, ’cause I’m enjoying all these poorly reviewed movies. RED TAILS is a simple pleasure – a straightforward, old-fashioned tribute to the camaraderie between the pilots and crew members of the Tuskegee Airmen, the first African-American Air Force squadron. It centers on the friendship between straight-laced, mustache-having but sometimes flask-swigging Easy (Nate Parker) and reckless, authority-bucking wannabe-ace Lightning (David Oyelowo). Easy (unlike his grandson Easy E) always wants to be professional and follow protocol, Lightning likes to disobey orders to go play chicken with a German ammunitaion train or carelessly dive on a battleship with no backup.

Back at the base everybody flips out for films of Lightning’s insane combat antics, but Easy is confident in his philosophy of choosing the right battles. He thinks Lightning is stupid to get in a bar brawl with some white soldiers who called him the n-word (the actual word, not the euphemism, which didn’t exist back then) because he risks losing his right to fight the bigger wars of defeating Hitler and demonstrating his talents so those dumb motherfuckers will have to eat their ignorant words. But maybe Lightning would take Easy’s opinion more seriously if he didn’t smell whiskey on his breath. 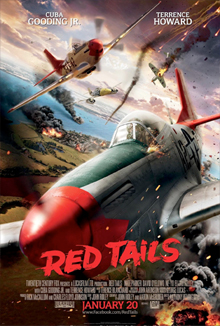 Above the pilots is Major Cuba Gooding, Jr., above him is Colonel Terrence Howard, above both are a bunch of white people like Gerald McRainey and Bryan Cranston (reprising his JOHN CARTER role as Authority Figure Who Shows Up To Be An Asshole For a Scene At the Beginning). Howard has to convince those ofays just to give his men some worthwhile missions, which they feel they’re not ready for on account of they have not had any experience having worthwhile missions. Plus they’re flying busted ass hand-me-down planes. People were so racist back then they apparently even had a stereotype that black men can’t fly planes. What the hell? Racists are so random. The Airmen in the movie win over the white bomber pilots by guarding their asses on a raid and staying on their tails instead of being suckered into chasing after German decoys. (Point goes to Easy.)

I don’t know what the hell happened, but I watched Gooding in a couple DTV movies and now all the sudden I kind of like him. Here he seems like he’s channeling Denzel’s expressions a little bit. He was in the HBO film THE TUSKEGEE AIRMEN but in this one he smokes a pipe, so it’s really different. The one criticism I have of his performance is that the pipe smoking seems self conscious at times. But maybe the character just loves smoking pipes. He and Howard get to make a couple inspirational speeches each, so they are the elder statesmen of the cast.

Method Man has a very small part where I believe he’s the first one to say the title. He’s credited as Cliff Smith, which is funny because the singer Ne-Yo is just credited as Ne-Yo. Somebody needs to teach him that if you have one of the stupidest stage names of any successful performer in the last 30 years (in my opinion it tops Flo-Rida, Chamillionaire and Rappin’ 4-Tay) then you can just go by something else for your acting credits. Buddy, you’re really so embarrassed by the name “Shaffer Chimere Smith, Jr.” that you think “it’s like Neo from THE MATRIX, only with ‘yo’ in it!” is better? Well, you’re wrong.

The character drama plays out within an unprecedented re-creation of WWII and its aerial battles, courtesy of ILM and producer George Yes ,That George Lucas, who put up millions of his own cash to finance the movie after trying to get it off the ground for 20 years. (get it, off the ground, like a plane.) The charisma and easy-going chemistry of the cast makes me think credited director Anthony Hamilton (a TV director who did a couple episodes of a show called The Wire) was really in charge and not just a figurehead. Lucas allegedly directed a bunch of reshoots to add more humor (he had Boondocks creator Aaron MacGruder add to the original script by John Ridley) but what he really seems to have a hand in is the excellent battle scenes. That guy’s been obsessed with dogfights for god damn ever, and here he puts the visual detail, thrilling momentum and all-encompassing sound of REVENGE OF SITHS opening space battle into a historical Earthling type context. This is probly the most planes I’ve ever seen in one movie.

Since George Lucas is behind this obviously it’s gonna turn out the Tuskegee Airmen story is the most important thing that happened in the childhood of all white people and they’re gonna be fuckin enraged that he did it the way George Lucas would do it and not the correct way. He made it so the Germans shot first. The characters aren’t based on specific historical figures, and alot of it is not really what happened in the battles and what not. But you know, it’s like that famous story about the time somebody asked Ben Franklin hey man, can you fuckin believe they ruined history by making that bullshit movie where Abraham Lincoln kills vampires. And Franklin is quoted as having said fuck no, dude, if they ruined history then what is this shit right here and he points to a history book on the shelf and it’s in real good condition, not ruined at all.

I had read that this was an old timey cornball throwback type deal, but I think those stories were exaggerated. It’s a movie with dramatic rescues, slow deaths and a team chant that would also work in an underdog football movie, but it has room for quiet and subtle. After the attack on the train Lightning has to go apologize to the guy who builds the plane for the damage he did to it, and he seems way more nervous about that than he does about any combat. Even better is the scene after he gets out of the brig and thinks he’s gonna be court-martialed, but they just chew him out and then let him go because they can’t afford to lose him. He has a long walk through the base, and people are saying hi, happy to see him out, but he’s very subdued because he knows he has to apologize to Easy for calling him a sellout when they were arguing earlier. And meaning it.

It’s old fashioned in that it deals with the issues in a simple and optimistic way. It sure is a light depiction of alcoholism – drinking doesn’t seem to cause a real problem for Easy other than making people think he might’ve made a wrong decision because of it. It seems like it’s more a matter of making a good impression than beating an addiction. And the racism is dealt with mainly by showing racist white pilots talk shit but then invite the Airmen for drinks when they see how good they are. But you know what, it’s not supposed to be the definitive story of how much racism between WWII soldiers was a bummer, and who made up this rule that all black movies gotta be primarily about racism? That’s a stupid rule.

I think they succeeded at making that movie, and I’m not sure I would trust Lucas to do the serious racism exploration some people seem to think this should be instead. Wait a minute, aren’t you the same motherfuckers whose blood still boils at the thought of what he did to his own STAR WARS movies 15 years ago, and now all the sudden you demand that he become the official cinematic chronicler of the African American experience during the war? Aren’t you also the same motherfuckers who got mad when Spike Lee did sort of make that movie?

It’s kind of funny – people like to accuse Lucas of being racist because he doesn’t have enough brothers in STAR WARS and they think Jar Jar is supposed to be black and I don’t know what else. But here he is producing this movie. He doesn’t have to use the old “some of my best friends are black” line to defend himself anymore. Now he can use “some of my best movies, directors, writers, composers and girlfriend are black.”

Anyway, I don’t know if the black teenagers liked it or not, but I did.

Aaron McGruder Anthony Hamilton Cuba Gooding Jr. David Oyelowo George Lucas John Ridley Method Man Nate Parker Ne-Yo Terrence Howard WWII
This entry was posted on Wednesday, May 23rd, 2012 at 11:04 am and is filed under Action, Reviews, War. You can follow any responses to this entry through the RSS 2.0 feed. You can skip to the end and leave a response. Pinging is currently not allowed.