You know what, that was overdramatic probly. But still. This is the first time I watched them. Here are my findings.

Part 1 was about this abused orphan that gets drunk and goes on a murder spree dressed as Santa. Part 2 was about his little brother grown up, having 45 minutes worth of flashbacks of stuff that happened when he was a baby and then going on his own jolly murder spree. Part 3 I think was still about the brother but now played by Bill Moseley with a glass dome on his head exposing his brain and if I remember right he flips out whenever he sees the color red. 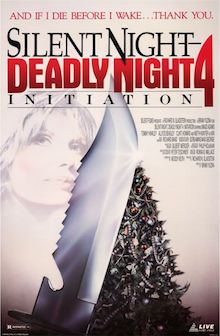 With part 4 they abandon that bloodline and premise and sort of do what John Carpenter tried to do with HALLOWEEN III, turning it into a holiday themed horror anthology series. I think that idea works better with this series since 1) not many people really give too much of a shit about the original storyline or remember the name of the killer Santa so they’re not gonna be that disappointed that he’s not in this and 2) because Christmas is not a horror-related holiday like Halloween it sort of lends itself to a wider variety of novel horror gimmicks, I think.

This one in my opinion sort of cheats though by not really being about Christmas. Yeah, it climaxes on Christmas Eve, there’s a Christmas party, there are decorations around. But the actual storyline doesn’t have anything to do with Christmas. In fact, the heroine is Jewish and doesn’t celebrate Christmas. I could pretty much guarantee this was a script that was re-written to take place at Christmas when they found out they could use SILENT NIGHT, DEADLY NIGHT’s good name to sell it. So that keeps it from being a perennial classic I would want to dig out every year like BAD SANTA or the Johnny Cash Christmas specials.

And I got other problems with it that I’ll get into, but I do have to give it credit for being a weird movie. It doesn’t go where I expected it to, has some imaginatively creepy shit that happens in it and even though I kinda got a problem with the subtext I gotta acknowledge that I find it interesting to discuss and that it did make me uncomfortable, and those are both positive things for a horror movie and not common in part 4s.

The director is Brian Yuzna (SOCIETY, BRIDE OF REANIMATOR, story credit on HONEY, I SHRUNK THE KIDS). The story on this is credited to a bunch of people but one of them is Richard Gladstein, who began his executive producing career with part 3 and must’ve used his Monte Hellman connection to get in on RESERVOIR DOGS and later PULP FICTION and JACKIE BROWN. Not bad.

Somebody named Neith Hunter plays Kim, the calendar and classified ads editor at an L.A. alternatively weekly called The Eye. They must see themselves as lefties ’cause they got a bunch of  anti-Reagan Administration Robbie Conal posters in their offices, but they also act like a bunch of sexist pigs. Her editor (PHANTASM‘s Reggie Bannister), her reporter boyfriend Hank (Tommy Hinkley) and the other boys in the office know she wants to try her hand at reporting with a story about a weird suicide that happened in town. Instead of saying “You go, girl!” they assign her story idea to Hank, tell her to get them coffee and shut a door in her face.

Well, she’s not gonna take it anymore, so she goes rogue to write the story anyway. In the opening scene we saw this poor woman scream and fall off a building while on fire, and Kim goes to the building during the daylight, talks to a weird butcher (Glen Chin) and book store owner Fima (Maud Adams) that were around when it happened. Even if you don’t suspect that the book store lady had something to do with it I think you’ll wonder about how much she touches Kim and why she invites her to a picnic. I mean maybe it’s just good customer service, I don’t know.

A quick glance of wikipedia and imdb message boards finds no discussion of this, but the movie couldn’t be much more obvious about being about lesbianism. Kim gets angry at her boyfriend, she asks her co-worker played by Allyce Beasley (Ms. DiPesto from Moonlighting) why she needs men anyway, she strikes off on her own. Then this lady Fima protects her from a creepy homeless guy (Clint Howard) touching her butt, shakes her hand and won’t let go, stands uncomfortably close, offers snacks and a free book, invites her to a picnic. When she does show up for the picnic they hug, there is cheek kissing, there is hovering as if they’re gonna kiss. Fima gives her drugged wine that makes her roll on the picnic blanket sensually and then Fima does finally kiss her when she seems to be unconscious. Later, among creepy hallucinations about giant bugs and evil faces in the walls she also sees a glimpse of lesbian porn.

These are all women who hate men and love Kim. The titelistical Initiation is not just into a cult or a book club in my opinion. Let’s just say it’s into a gang you may know from THE WARRIORS called The Lizzies. She’s curious but she lives to regret it. Instead of hot sex she gets slimy bugs and Clint Howard.

I swear, this seems like a propaganda movie designed to scare the shit out of your daughters before they experiment with girls. After this they’ll associate pussy with weird rituals, insects and Ron Howard’s brother. Shirtless and oiled. Get that deep enough in their subconscious and they’ll go running back to that boyfriend whether it’s good for ’em or not.

There’s a whole thing about Kim meeting her boyfriend’s parents and the dad gives her a bunch of sexist shit. He doesn’t think she should be an investigative reporter either, because “Well, I think a woman’s place is in the home, raising a family.” When they cut to her reaction to that line the boyfriend’s little brother’s expression made me laugh: 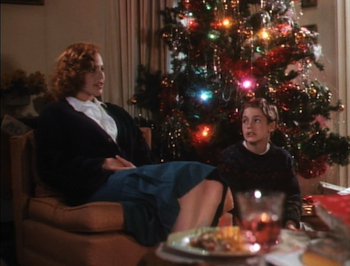 Sympathetic and embarrassed. He’s smart enough to know his dad’s a huge asshole. Alot of good it does him though – Kim later ends up kidnapping him and bringing him to the cult to help save her own ass. I mean, she rescues him, but in my opinion it’s not responsible adult behavior to endanger a child with a cult.

That’s kind of what makes this movie interesting, though. It can be refreshing when the protagonists can’t always be counted on to be sane. Same with the lesbian subtext. I think it’s unintentionally kind of homophobic but it also seems like an honest look into Yuzna’s psyche, an unfiltered look at his fears. It’s uncomfortable in a good way.

There’s also some great “surrealistic visual design and effects” (as the credits call it) by Screaming Mad George. The giant bug stuff is obvious but there’s some genuinely creepy weirdness where her fingers get long and tangled together, her legs grow together, things like that. And there are a bunch of shots where objects line up to look like a face, and I was impressed that they didn’t make it too obvious, they trusted in subtlety. Maybe the idea of a creepy spiral in a plate of spaghetti was too far on the silly side, but oh well. Points for trying.

I don’t know how good I can claim this is but it’s definitely way better and more interesting than I expected all these years that I avoided watching it. Does that count as a Christmas miracle? I think it does. God bless us, every one.

Allyce Beasley Brian Yuzna Christmas Christmas horror Clint Howard Neith Hunter part 4s Reggie Bannister Screaming Mad George Tommy Hinkley
This entry was posted on Thursday, December 22nd, 2011 at 12:42 am and is filed under Horror, Reviews. You can follow any responses to this entry through the RSS 2.0 feed. You can skip to the end and leave a response. Pinging is currently not allowed.