THE LAST OUTLAW is not that unexpected gem. Sorry. It’s not too bad, though.

I heard from exactly one person who has seen THE EXPENDABLES at a test screening. He liked it and one thing he seemed enthusiastic about was Mickey Rourke’s performance. So in honor of the hypothetically great job Rourke did in a small role I wanted to find one where he is the main attraction. This 1993 western seemed promising because the cover is a big picture of his face, the director is Geoff Murphy (UNDER SIEGE 2: DARK TERRITORY, second unit director of the LORD OF THE RINGS joints) and the writer is Eric Red (THE HITCHER, NEAR DARK). What I didn’t take into account is that, like most westerns of the era, it was made for cable and has that made-for-cable-western look and feel. I don’t know why, but most of these feel kind of the same.

It’s kind of good, but it has a major casting problem holding it back: the least cool star in the ensemble is the hero and narrator. You got Mickey Rourke, Keith David, Steve Buscemi, John C. McGinley, Ted Levine… but bland Dermot Mulroney is the one we’re supposed to root for and not scoff at when he half-whispers his melodramatic voicovers about his personal war with Rourke’s magnetic character Graff. It’s hard not to prefer the villain in this one. Now that I think about it it’s almost a horse-riding version of THE HITCHER in that sense. Eric Red, you sneaky son of a bitch. But don’t worry, there’s no horse crashes in it.

The aforementioned individuals play a gang of Confederate soldiers who felt they had nothing to believe in after they lost the war so they started robbing banks. I’m not clear why Keith David hangs out with these pro-slavery assholes, but oh well. The movie starts out really cool with the rare but always satisfying trick of credits where the actors names are shown over their first appearances as they ride into town. It’s like a roll call.

A huge posse has a tip which bank the gang is gonna rob. They’re all hidden but have the place surrounded like an old west SWAT team, all prepared to shoot these crooks dead the moment they step off their horses. The plan fails because the gang stays on their horses and rides right into the bank. Whoops.

But a little later in the movie the posse gets their shit together and manages to actually capture Graff. Well, maybe they just luck out. Mulroney turns on Graff due to an ethical disagreement about whether to never leave a man behind (Mulroney’s position) or sometimes leave a man behind (Graff’s). The betrayal compels Graff to come along in chains with the posse and a bank manager to hunt down the rest of the gang and get the money back.

Graff is kind of a Lucifer type figure. He mostly stays quiet but drops little comments here and there to manipulate his captors. When a bunch of people get killed and the posse’s decided it’s too dangerous and time to quit, Graff mutters something about them getting the dead people’s share of the reward, so they all decide to stay. He tries to pretend like it’s an off hand comment, but come on dude, it’s so obvious. These are some stupid motherfuckers to fall for it.

He’s even more of a devious mastermind than that, though. He manipulates the whole situation to force Mulroney, as the new leader, into having to make difficult decisions like the one they had their fallingout over. He’s teaching him lessons.

Rourke is really good, as dedicated and as weird as we’ve come to expect. And he seems as deviously smart and as scary as the character is supposed to. My only maybe-unfair criticism of him is that his face looks strange, overly made up or surgeried or something, and it’s kind of distracting. I also noticed, strangely enough, that he looks alot like Bruce Willis in this movie. Look at the cover here, I think you can see what I’m talking about. Weird. I guess we can give the movie extra points for that. Residual Bruce Willis presence.

I guess I shouldn’t be too hard on this. There’s alot I liked in it, lots of good scenes and moments, like when Graff shoots McGinley’s horse so Mulroney will be forced to make the decision to leave him behind. And then McGinley accepts his fate and decides to wish them luck and try to take some laws down with him. A nice old west bonding moment.

I’m afraid my man David comes off kind of bad in the end. His character is supposed to be real superstitious and he gets all panicky. He plays it real over-the-top and it reminds me of that old racist stereotype where for some reason black people were supposed to be afraid of ghosts. Otherwise he’s good in the movie, but I think his character deserved better. He should have the last laugh on these slavedriving crackers.

Red comes up with some good scenarios, it’s a good showdown, but I think it doesn’t quite work because the casting is so off balance. Mulroney is nowhere near Rourke’s equal in presence, charisma, acting intensity, audience interest or perceived badassness. It throws the whole thing off.

And since it’s not quite gelling the slightly pretentious touches come off bad. There’s a scene where Mulroney meets Graff in a saloon, buys him a drink and tries to ask for a truce, but Graff shuts him down. It’s a cool scene, but we watch it reflected in the mirror behind the bar, which has a big crack across it, separating the images of the two actors. There’s that visual cliche in movies about a split personality, they like to show the person reflected in a mirror or window that’s cracked, to visualize the split in their indentity or whatever. But this? What is this supposed to tell me? This partnership broke up and now they’re in a mirror that broke up. Is that supposed to be deep or something? If it was an opponent worthy of Rourke I woudln’t even be thinking about it. I’d be thinking, “Wow, look at Mickey Rourke and Viggo Mortensen just sitting there… what a great matchup!” But because it’s just the guy from MY BEST FRIEND’S WEDDING I’m stuck thinking about the crack in the mirror.

As flawed made-for-cable-westerns go though I can recommend this one. At least they’re trying. 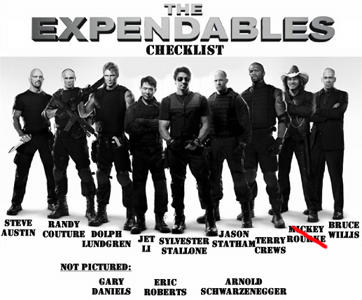 Countdown to The Expendables Dermot Mulroney Eric Red Geoff Murphy Keith David made-for-cable-movies Mickey Rourke Steve Buscemi Ted Levine
This entry was posted on Friday, July 16th, 2010 at 10:28 am and is filed under Reviews, Western. You can follow any responses to this entry through the RSS 2.0 feed. You can leave a response, or trackback from your own site.

78 Responses to “The Last Outlaw”