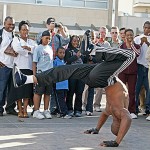 True, DMX has failed to deliver on the promise I thought I saw in him when I first saw BELLY. He seems to have pretty much lost his mind (up in here, up in here) and is not above making cameos in unwatchable DTV garbage in order to pay the legal bills for his poor driving, impersonating of federal officers and lack of dog feeding. So DMX alone is not a selling point. 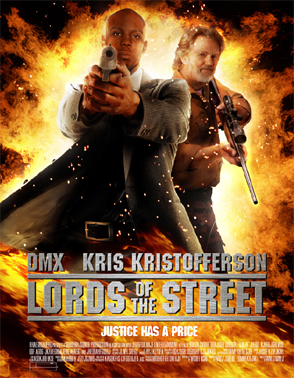 But teamed with Kris Kristofferson? Blade’s mentor? FIRE DOWN BELOW’s villain? Mohammed Ali’s white cohort in the TV movie FREEDOM ROAD? Guy who should play me in a movie if Nick Nolte is not available? Could the creators of the albums ‘The Silver Tongued Devil and I’ and ‘It’s Dark And Hell Is Hot’ really be standing side by side, weilding their guns in a fortress of flames and sparks?

That is a hell of an odd couple there. Those two names above the title sold me. They didn’t even need to bother with that terrible photoshopping, they already had me.

But badly photoshopped covers are promises, and like politicians, DTV movies never keep their promises. If the two bodies who had DMX and Kris Kristofferson’s heads attached to them on this cover ever passed each other in the hallway outside the photography studio then that’s more of a relationship than X and Kristofferson have in the movie. They are not a team, not in any scenes together, I don’t think they even know each other exist. The actual main character of the movie is Detective Travis Roundtree (Ameer Baraka, not pictured). DMX doesn’t show up until 23 minutes into the movie and it’s unlikely he shot for even a full weekend. He mostly just quotes the Bible menacingly and plays pool in one part.

The good news is that Kristofferson really is in the movie. It opens with him and Baraka in a car hauling ass to a crime scene where a guy is about to blow himself up. Kristofferson gruffly rants about Willie Nelson and how he’s better than “Tu-Pack.” He brings up Willie Nelson throughout the movie and also declares Ray Charles’s “Modern Sounds In Country and Western Music” one of the greatest albums ever recorded.

His character is supposed to be obsessive compulsive, he says due to the violence he’s seen on the job and in Vietnam. So he complains about birdshit on picnic tables and uses hand sanitizer alot.

Also he fucks his wife alot, always offscreen through ADR. So for example there will be a shot of the outside of his house and the actress playing his wife makes sex sounds, then it cuts to him in the bathroom with no shirt on.

Now would be a good time to mention that this movie is strictly amateur hour. The opening scene takes place in the day, but when the cut to the exploding car it turns to night. The police work makes no sense – they just go around shooting people and leaving the bodies on the ground with no consequences. There are alot of conversations taking place in cars with greenscreened backgrounds. All of the supporting actors seem like they’ve never acted before. The script is made entirely from post-consumer recycled cliches, so those Kristofferson character quirks are the closest thing to imagination in the movie. Take a guess what the drug lord villain is named:

(not that it matters, but the answer is b)

For a few minutes I was mildly amused by Kristofferson complaining but not doing anything while his partner Goes Too Far and puts a gun in a guy’s mouth To Get Him To Talk. Kristofferson just acts like his partner torturing people is an annoying habit like snapping his gum or something. But you can only squeeze so much juice out of these cliches by having a gruff old man react to them.

On the positive side it looks like it was really filmed in New Orleans and although it has the filmatic sophistication of DOLEMITE deleted scenes it at least doesn’t look like all the other DTV shit. I have the feeling the movie would have Avid farts and digital shit all over the place if these filmatists knew how to do that stuff, but luckily they don’t. There’s a CGI bullet and some fake digital fire but with the raw, dirty look of the photography and the clumsy crudeness of the thing it mostly looks like it could’ve been shot in the ’80s. And alot of the dudes playing cops and convicts seem like tough guys the director (credited as Mr. V) must’ve known from his neighborhood instead of your usual Hollywood phonies. So at the beginning it has a certain straightforward integrity to it.

But not for long. A story and characters this generic might be acceptable to string together action sequences, but when there’s not much action you got a problem. When Kristofferson isn’t talking the movie is boring as shit.

DMX’s character is some kind of psychotic hitman who wants revenge on Santiago for the death of his sister. While the hero, Roundtree, is having his climactic showdown with the villain all the sudden DMX shows up and fires a bullet into a barrel, which catches Santiago on fire that appears to be digitally enhanced and then erupts into almost a fireworks show. Then DMX gets on his motorcycle and drives away and nobody seems to wonder who he is or think there was anything unusual about what just happened. To be fair, I’m sure all kinds of crazy shit happens in post-Katrina New Orleans, maybe this sort of thing is not that surprising.

DMX DTV Kris Kristofferson
This entry was posted on Friday, September 19th, 2008 at 1:40 pm and is filed under Action, Reviews. You can follow any responses to this entry through the RSS 2.0 feed. You can skip to the end and leave a response. Pinging is currently not allowed.