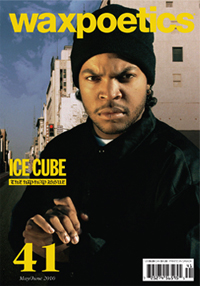 I picked this up a little while ago but didn’t get a chance to read any of it until this morning. There’s a bunch of articles in it that look promising, including an interview with Ice-T about the early days (think Breakin’) and a profile of DXT, the DJ who did the scratches for Herbie Hancock’s “Rock-It.” But the important one today is the Ice Cube article, which focuses entirely on his first (and in my opinion best) album Amerikkka’s Most Wanted.

I won’t give it all away, but if you’re interested in that album it’s great background on how this L.A. gangster rapper quit the hottest rap group around, went to New York and recorded his first solo record with the greatest production crew of all time, the Bomb Squad. It’s just full of little details like how Chuck D actually tried to convince him to stay in NWA, why there’s such a shift between ignorant gangster lyrics and attempts to be more conscious (he wrote half of the songs for Eazy E!), that they had a problem with voices in the skits sounding too obviously not-from-L.A., why Mr. Rogers got $20,000 from the album. It’s good shit and at the end of the article you learn that there’s gonna be even more when the article is expanded in the book Check The Technique Vol. 2: More Liner Notes for Hip-Hop Junkies.

Ice Cube
This entry was posted on Thursday, July 15th, 2010 at 9:35 am and is filed under Blog Post (short for weblog). You can follow any responses to this entry through the RSS 2.0 feed. You can skip to the end and leave a response. Pinging is currently not allowed.