GREENBERG (Ben Stiller from NEXT OF KIN) is a 40 year old sometimes-carpenter who, after some kind of breakdown and stint in a mental hospital, comes to house sit (crash at) his banker brother’s place in L.A. while the family’s on a business vacation to Vietnam. His plan is to “do nothing,” but he’s a huge fucking baby so he starts getting the family’s nice assistant Florence (Greta Gerwig, HOUSE OF THE DEVIL) to shop for him, have a relationship with the dog for him, etc. Through horrendously awkward maneuvers he gets sloppily into her pants and makes things weird. Then he starts being a dick until she doesn’t want to see him again, but the dog gets sick and he doesn’t have a car so she has to bring him to the vet, etc. Romance does not ensue, just awkwardness. 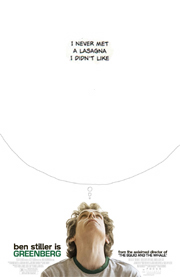 This is a Noah Baumbach joint, so it’s very detailed and observant about all the ways Greenberg can be petty, arrogant and self absorbed. Unlike in Baumbach’s last one, MARGOT AT THE WEDDING, there are at least some characters who aren’t assholes. Gerwig plays a more naturalistic version of a Zoe Deschanel type eccentric sweetheart. She’s kind of a space cadet but her worst crime is being forgiving of and wanting to spend time with this insufferable dickhead Greenberg. Same goes for Rhys Ifans as the overly charitable, screwed over friend and former bandmate who in my opinion puts up with too much of Greenberg’s bullshit. Greenberg insults this guy’s wife, endangers his hard-earned sobriety and doesn’t listen when he talks about things that are important to him, like his son. You’d think these nice characters might be some much needed sunshine on a rainy day, but instead it’s just depressing to see them get sucked into this miserable prick’s blackhole of negativity. They don’t deserve it.

I believe GREENBERG is the human GARFIELD. Garfield sits around calling everybody else stupid and being in love with his own thought balloons, so does Greenberg. Garfield gets completely unearned love and loyalty from his hapless owner, Greenberg from his drummer. Garfield mooches off his owner’s home and food without even performing his one expected duty of cathing a mouse, Greenberg stays at his brother’s house, eats his food and uses his assistant but doesn’t even finish building the lousy dog house he promised. Garfield is jealous of the cute kitten Nermal getting all the attention, Greenberg is jealous of his friends’ kids taking their attention away from him. Garfield binges on lasagna, Greenberg on coke. Garfield acts like he should get a congressional medal of honor for getting off his ass to try to save the dog from the trouble he himself caused, Greenberg does it because he makes a half-assed effort to care for the dog he’s supposed to be responsible for anyway and who it seemed like might’ve just gotten sick because Greenberg left him laying out in the sun with no water or food.

The only differences are 1. Greenberg is not orange or fat 2. He doesn’t specifically hate Mondays, just work, and 3. We know more of his backstory. The guy is obsesed with his relationships in the ’90s. One of the most effectively uncomfortable scenes is when Jennifer Jason Leigh, as his many-years-ago-now-is-grown-up-and-has-a-bunch-of-kids ex-girlfriend, agrees against all better judgment to go to lunch with him. He makes a big production of apologizing to her for some small thing he said to her like 15 years ago or something. Even though she doesn’t remember it or care he keeps talking about it. As the Jacksons once said, it’s torture. It’s obvious that he isn’t even sincere about apologizing, it’s just yet another bullshit way for him to draw attention to himself, trying to be a sensitive guy. Later he makes an even more painful fake apology to Florence which sounds phony and forced, then turns into fingerpointing, and he doesn’t even back down when called on his bullshit.

Just like Garfield I want to punch this guy in the face but I feel like the movie wants me to put him on a t-shirt or at least suction cup him to the rear window of a mini-van. But I don’t know. Maybe we can learn more about Garfield by studying Greenberg. Maybe Garfield also needs to get beyond things that happened to him when he was young and showed promise. But if Greenberg is any indication he’s just gonna stay fat and bitter his whole life anyway so I’m not sure it’s worth spending the time to understand him.

Most people I know who saw GREENBERG loved it. I have to agree that it’s interesting and well made. Great casting and acting all around, observant and uniquely Baumbachian. It really wasn’t until the end that I knew for sure I didn’t like it. You watch these innocent people get shit on by this human Garfield, this reverse Focker who instead of absorbing humiliation just spits it out at everyone around him, and for what? At the end of the day all I was left with was “Yep, there was a real fucking asshole right there.” It even made me feel sorry for his rich brother having to put up with his shit from the other side of the planet.

Baumbach is also known for co-writing movies with Wesley Anderson, but they seem like opposites to me. Anderson seems like he loves everybody, Baumbach seems like he hates everybody. Until  the one with the fantastic foxes my favorite Anderson was ROYAL TENENBAUMS. In that movie Gene Hackman is a total asshole, but you love him and believe he’s trying to do better and when he fails you can usually get a good laugh out of it. If Baumbach himself is Garfield I guess Anderson is Ziggy. Anderson’s movies are about “assholes are people too.” Baumbach’s are just about “people are assholes.”

Ben Stiller Jennifer Jason Leigh Noah Baumbach Rhys Ifans
This entry was posted on Sunday, July 18th, 2010 at 2:52 am and is filed under Comic strips/Super heroes, Drama, Reviews. You can follow any responses to this entry through the RSS 2.0 feed. You can skip to the end and leave a response. Pinging is currently not allowed.