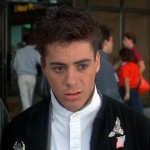 Fortunately this one lives up to the word-of-the-mouth. This summer everybody’s excited about Robert Downey Jr.’s funny turn and ad-libs in IRON MAN, but it must’ve been less surprising to people who saw this one. Not only is Downey the star, he is the narrator who possesses the powers of someone recording a DVD commentary. He can skip around, make jokes, apologize for bad narration, complain about movie conventions (specifically comparing one scene to a shot in THE HUNT FOR RED OCTOBER).

Yes, the movie is covered in meta. You got that all powerful narration, you also got a character obsessed with an old pulp detective series called Johnnie Gossamer, so the mystery elements of the story of course mirrors the types of things that would have happened in those books if they were real books. But also a movie adaptation of the books figures heavily into the plot. All of this could easily be annoying, but I guess Downey and Black are just good enough at it for it to come across more as genuine wit than as smarmy hipsters trying to show off.

But I guess to be fair they are showing off. The movie is extremely writerly. If you’re familiar with Shane Black you know the conversations are gonna go at lightning speed and all the characters are gonna have insults and smartass responses that you yourself would never come up with until a week later. Val Kilmer gets to call Robert Downey Jr. an idiot in many different ways. Like:

“Jesus. Look up ‘idiot’ in the dictionary. You know what you’ll find?”
“A picture of me?”
“No! The definition of the word idiot, which you fucking are!”

Stylized dialogue like that can be distracting, but here I don’t think it is. They pull it off and it’s a big part of the movie’s appeal.

The story unfolds in that seemingly random way that alot of my favorite pulp writers’ stories do. Lots of goofy little things happen in just the right sequence that happens to bring together a bunch of characters and a bunch of guns. At first Downey’s character seems to be a bigshot actor, but then we find out he’s just some dude who was running from the cops and happened to run into a casting session. His actual guilt over getting his friend shot by police is mistaken for a raw improvised performance and next thing you know he’s poolside at a big Hollywood party. The female lead Michelle Monaghan (the gal from MISSION IMPOSSIBLE: 3 who looks kind of like Liv Tyler) is at the party for similarly random reasons involving the accidental shooting of a drunk TV star dressed as a cyborg. In this movie things don’t happen for normal reasons.

I like the way the story pays tribute to noir but doesn’t follow it as stringently as you keep naively thinking it’s going to. There are alot of good laughs that come from seeming to use a normal movie convention and then actually not. For example the heroine stumbles onto the clue that solves the whole mystery, so the heroes go chasing after her knowing she’s getting herself into danger. But later they learn that she is actually at home because she decided her theory was stupid and forgot about it.

In a way I think maybe Black’s hiatus helped rejuvenate him. It put him back in the just-don’t-give-a-fuck mentality of a guy in his early 20s who doesn’t know what he’s doing. For me the biggest laugh in the movie involves a bodily mutilation that really has no important purpose in the story but just is something that could easily happen if people are slamming doors during emotional conversations. He must’ve been watching some movie with a door slamming argument and thought “You know what I’m gonna do in my next movie?” Either or that or he was writing the argument, jokingly thought of doing this, and then realized “Why the fuck not?” The motto of every great writer, from Mark Twain to the guy who did Choose Your Own Adventure.

Black definitely cuts it as a director. The performances are all good, it looks nice and slick, it’s well-paced, nice uses of music, the bits of action work well. I definitely wouldn’t guess this was a writer-turned-first-time-director deal. So Black and Downey both came through when it counted, but I also gotta take my metaphorical hat off to Val Kilmer as the toughest character in the movie, “Gay” Perry. He’s a private investigator working for the producer of the movie. He’s supposed to help Downey prepare for his role but ends up being his partner and savior when he gets into trouble. Perry also happens to be openly gay and is too self-assured and capable for anybody to successfully give him shit about it.

In some movies Kilmer doesn’t come across too well – he can seem like kind of a weirdo who thinks he’s smarter and more interesting than he actually is. Not this one though. In this one he’s alot like his character in SPARTAN. Not as much of an asshole, but it’s another guy who always knows what to do at the drop of a hat (another metaphorical hat, but not necessarily the same one I tipped in the last paragraph), can always figure out what people are trying to pull on him and knows how to fight his way out even if it involves firing a small gun from inside his underwear (long story).

I would love to see sequels to this. Not because there’s anything about the plot that should be followed up on, but just because I would like to see those two characters come back and get involved in other cases. Well, that ain’t gonna happen, so I’ll settle for Black sticking around for a while as writer-director.

Christmas Michelle Monoghan Robert Downey Jr. Shane Black Val Kilmer
This entry was posted on Sunday, July 13th, 2008 at 5:54 am and is filed under Drama, Reviews. You can follow any responses to this entry through the RSS 2.0 feed. You can leave a response, or trackback from your own site.