And trust me, it gets worse. This is like 5 minutes into the movie, including the opening credits. 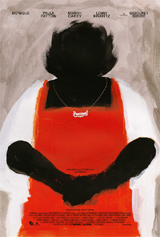 This movie (and book, I assume) is so Lars-Von-Trier-sadistic in all the torment it dumps on this poor girl (and in turn the audience) that I kind of see where crazy fuckin Armond White is coming from in his pan of it (except the part where he lists LITTLE MAN, MEET DAVE, NORBIT and THE LADYKILLERS as “excellent recent films with black themes” that were unjustly ignored. I’m sure when he finished the essay he thought, “Jesus, this is way too reasonable – better bring up NORBIT again.”) There was a point in the movie when I couldn’t help but think about how society looks down on things like LAST HOUSE ON THE LEFT, but nominate ones like this for best picture. It’s not fair to punish this movie for the racial inequities of past awards, but it bums me out that John Singleton and this guy Lee Daniels both beat Spike Lee to best director Oscar nominations. What the fuck?

Remember how white people used to always ask Spike “Where are the drugs?” in his movies, like they thought it just wasn’t a realistic portrayal of black life unless Mookie and Rosie Perez were smoking rocks during the ice cube/nipple scene? Well, this one doesn’t deal with drugs, but can it interest you in some incest? Maybe that’ll float your boat. And hey, Mo’Nique, you seem like a nice lady. You make people laugh. You stand up for the plus-sized ladies. Wait, what? You say you did a movie where you beat up your daughter and call her a bitch and will only touch your Down Syndrome grandson if it helps you cheat welfare but then you cry at the end? Well why didn’t you say so? Here, have some awards! Have all the awards! This is the best thing since Denzel broke the color barrier for corrupt LAPD cops!

Sorry, I just needed to get that off my chest. I know it’s not entirely fair. Mo’Nique is pretty good in it, and Denzel was good in his. But I don’t know, man. If a white director did this movie, with its adorably illiterate subtitled opening credits, colorfully dingy apartment, hyperstylized rape scene and – for God’s sake – its scene where Precious steals a bucket of fried chicken and eats it all by herself… I mean, wouldn’t we be justified in shaming that motherfucker out of the business?

To put it another way, if SOUL PLANE had been based on a novel and had incest in it would it not be considered a minstrel show? I heard Mo’Nique was good in that one too.

All that having been written, PRECIOUS BASED ON THE NOVEL PUSH BY SAPPHIRE PUBLISHED BY KNOPF DOUBLEDAY PUBLISHING GROUP did win me over in the end. I wasn’t so sure about the director (who has a picture of his own face as the logo for his production company, Lee Daniels Entertainment), but I liked his characters, so he must’ve done something right. I liked Precious and I have to confess that I found it tremendously satisfying whenever she got to punch someone. I know, she learned it from being beat on and it’s not a way to solve problems, but I still laughed when she punched a girl in her class for calling her fat. Nobody else laughed, and then it was a dramatic scene where everybody’s upset because she’s fighting. So I apologize to the other people at the Saturday matinee.

The enjoyable part of this movie is that she gets into a literacy class at an alternative school. The teacher and the girls in her class end up filling the void left by her asshole family and help her to believe in herself a little more. They’re funny characters who don’t fit the stereotypes of these movies that much, and it’s sweet when they become really close. I figured this “Sapphire” must be a drag queen but it turns out she’s a poet and wrote the book based on girls she met when she was a literacy teacher herself. So she must be proud that they cast the gorgeous Paula Patton as the teacher. I know I considered forgetting how to read and trying to get into this class when I saw her.

By the way, the teacher is “Ms. Blu Rain,” which seems like one of those “only in a novel” type names, but since the author’s name is Sapphire I’m gonna go with it.

I guess everybody else knew about this, but I hadn’t heard who was in the cast. Precious’s tough caseworker Ms. Weiss reminded me a little bit of the actress who played Agnes DiPesto on MOONLIGHTING. I was trying to figure out if I’d seen her in something else. Then real late in the movie I thought, “Actually, she kind of looks like Mariah Carey. But obviously that’s not who it is.” I was genuinely surprised when I saw her name on the end credits. She’s very good in it, and not in a show offy way. You know how in her songs she did that high-pitched noodling that was kind of a fun novelty at the time I guess, but it spawned American Idol and ruined music forever? Fortunately Mariah has no acting equivalent to that. She does have a crying scene but not a hysterical Oscar clip one, it’s a trying-to-keep-a-brave-face-but-a-tear-pops-out move. I was impressed.

I have mixed feelings about this movie. I’m really not sure about the decision to show poor Sidibe eating a bucket of fried chicken. It’s like Michael Bay remaking the Eddie Murphy NUTTY PROFESSOR. I’m sure it comes from the book, but does that mean we gotta act it out and make people watch it? It wasn’t until the next day that I thought of a reason to justify it, that it could symbolize the way Precious’s shitty life forces her to fit into racist stereotypes. Or something. I guess I don’t get that one.

Precious’s life has to be real fuckin bad, because she makes this point to Ms. Weiss that it’s nice of her to care, but she really can’t handle all the horror in Precious’s life. So that’s why we have to watch this character we like go through every horrible thing imaginable besides getting drafted to Vietnam or getting locked up in Gitmo without charges. But even that part is kind of offensive, because in fact there are many selfless and heroic people in this world, including people in jobs just like Mariah’s there, who really can comprehend all that and really do put themselves out there to help people. There are people from all around the world right now digging through the rubble in Haiti looking for survivors. Those people are gonna have nightmares the rest of their lives, they still do it. It seems like kind of a “fuck you” to great people to say, “Sorry lady, thanks for trying, you didn’t know any better.”

And I mean, what is the point of all this? What does Oprah see in it? Child abuse is a huge problem, I think alot of people don’t even really notice how many other problems wouldn’t even exist without the person first having been abused when they were growing up. But what good does it do for us to watch it in this movie? I don’t think it’s supposed to be a thrill ride like the horror movies I like, so what does it mean? I figure Oprah must see it as a survivor’s tale to inspire people who are going through that themselves, but does it really work out that way?

(NON-SPECIFIC SPOILERS this paragraph) The ending I’m not sure about, but just because I don’t really know what they were going for. It seems like it’s supposed to be a happy ending, but if you think about it’s gonna be happy for about an afternoon, then things are gonna get even worse. And I guess that’s probly intentional, but if so then what’s the point of rubbing our nose in this shit if there’s not even a light at the end of the tunnel? Are you Ingmar Bergman or are you David “The Demon” DeFalco? Are you trying to uplift us or just show us the doorway to true evil because dude have you ever noticed how shit is fucked up and it’s about time the people were told the truth about it?

And speaking of showing us the evil, I’m not sure about that rape scene. I mean I’m glad they don’t show anything but it’s kind of weird how cool he decided to make it, with his stylish closeups of frying pig’s feet and all this. This is crazy but it made me think of the WWE slasher movie SEE NO EVIL and the way Gregory Dark would randomly cut to sped up shots of roaches doggystyling each other.

But Sidibe is so good, in fact the whole cast is so good. And Ms. Rain is so nice, and Precious’s classmate Joann (Xosha Roquemore) is so funny, and I started to like being in their company. In a way my reaction is similar to the one I had to JUNO. I have some misgivings about it but the humanity of the characters elevates the whole movie. That would be fucked up though if somebody thought PRECIOUS, BASED ON THE NOVEL PUSH BY SAPPHIRE, YEAH, YOU KNOW, SAPPHIRE was “the black JUNO,” because in JUNO she gets pregnant and her parents are very supportive. In this one her dad rapes her and her mom is jealous and throws a TV at her.

Yeah, you know, I’m thinking Armond White is kind of right. For the last time ever.

p.s. Slick move with the title, guys. You name the fucking thing like they’re announcing an adapted screenplay Oscar nomination, then that’s exactly what you get. Maybe Oprah was right about The Secret. (For the record the title sequence just says PRECIOUS. The “based on the novel” shit is only in the advertising.)

Mariah Carey!?! Oprah Paula Patton
This entry was posted on Thursday, February 4th, 2010 at 4:35 am and is filed under Drama, Reviews. You can follow any responses to this entry through the RSS 2.0 feed. You can skip to the end and leave a response. Pinging is currently not allowed.

60 Responses to “Precious, by Vern: Reviewed from the movie PRECIOUS, BASED ON THE NOVEL PUSH BY SAPPHIRE”