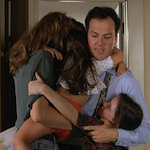 I think there is some subtle commentary about policing early in the movie, which I will go into, but for the most part it’s not about that. Instead this movie – which was only the fifth release from Disney’s not-for-kids label Hollywood Pictures – really is a fusion of the type of vibe of those two posters. It’s a gritty police/crime thriller about a cop whose partner gets killed, but in addition to going after the people he considers responsible, he and his wife take care of and then try to adopt the dead partner’s three adorable daughters. The amount of screen time and sincerity it puts into the second part is very unusual, so although this is in many ways not my type of movie, I respect its bold mix of genres. END_OF_DOCUMENT_TOKEN_TO_BE_REPLACED 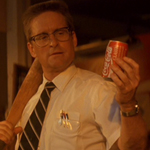 (He’s credited as “D-FENS” after his vanity license plate, but they find out his name is William Foster, so that’s what I’ll refer to him as.) END_OF_DOCUMENT_TOKEN_TO_BE_REPLACED