I gotta warn you this is a little on the cheesy side. It’s not exactly great action, and some key moments are bogged down by bad decisions like having Ice’s one-liner clearly recorded in a studio and looped in so it takes you out of the moment. But it’s still enjoyable to watch because it’s such a simple, classic setup and it’s an all star cast. Hunting Ice are no less than Gary (PREDATOR 2) Busey, John C. (ON DEADLY GROUND) McGinley, Charles S. (BLACK DOG) Dutton, F. Murray (SCARFACE) Abraham, and their sicko leader, Rutger (BLIND JUSTICE) Hauer. Then there’s some guy named William McNamara as Abraham’s babyfaced son, and for most of the movie that is the entire cast. So not a bad ensemble. 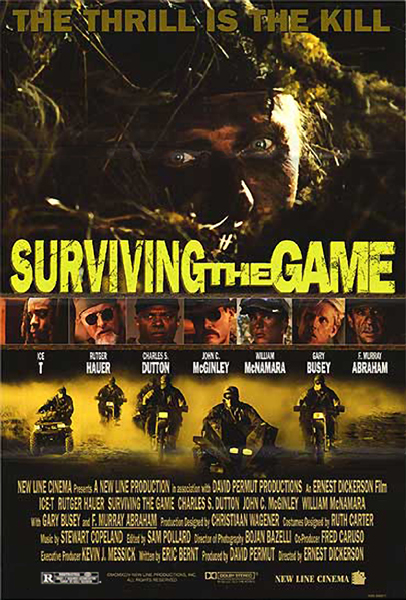 Busey gets to be crazy Busey, in fact he has a pretty incredible monologue about his fucked up childhood that makes the idea of his character being a CIA psychologist even funnier. McGinley also gets to do the type of over-the-top acting that makes him so enjoyable. And the movie has a great use for Dutton – at first we see him as a volunteer at a street mission supposedly trying to help Ice-T out. It’s pretty standard for a guy like that to secretly be evil, but this is Charles S. Dutton we’re talking about. He’s Roc. He drove GET ON THE BUS. He’s in RUDY. Even when the guy goes into space, like in ALIEN 3, you know he’s still playing a great inspirational dude who gives tough love and makes righeous speeches. That’s exactly who he seems to be at the beginning of this, so it’s actually kind of surprising when all the sudden he’s talking about choosing Ice-T as his prey due to his breeding and musculature. Talking about him like he’s a horse or a piece of meat. This movie is kind of fucked up! And Dutton has the best death, laying on the ground mumbling about plans for the next expedition right after having his legs blown clean off.

You know, I’m gonna go on a little tangent here, but I read the nerd websights so I’ve learned a few things about this “GI Joe” movie that comes out next summer. They are mad because the leader of the bad guys looks totally different, he used to wear a blue hood with eyeholes, but supposedly the filmatic adapters felt it looked too much like a Klansman hood so they did something totally different for the movie. I thought that was funny because it’s THE BAD GUY, why would it be a problem for him to look like a Klansman? Are you worried the Klan will complain about being portrayed as bad guys? As recently as the 1980s white supremacists were a great go-to villain for low budget action movies (see for example AVENGING FORCE or NINJA VENGEANCE.) I really hate when people whine about “political correctness” but this is one that makes no god damn sense. Sure, these guys are evil, they’re murderers, but let’s make sure the audience doesn’t think they’re racist. That would be bad.

I bring that up because in a way I think having Dutton as one of the hunters is kind of a copout, because in 1994 it would’ve been pretty provocative to have a movie about white people hunting a black man for sport. Clearly they think he’s less than them because he’s homeless, but if Dutton wasn’t one of them you would figure they’re racists too. Back then “gangster rap” was still a major boogeyman for the mainstream media. On the newstands, a menacing young hoodlum with the scary name “Snoop Doggy Dogg” was leering out from a spooky Newsweek cover story. And to the type of people who would read that thing, Ice-T was only known for “Cop Killer.” That was a couple years earlier – his most recent album at the time was “Home Invasion,” a title referring to the idea of black rappers getting their ideas into the heads of white kids in the suburbs. Paranoid white people were afraid of these rappers, but SURVIVING THE GAME reversed it, making the rapper the victim and the establishment the aggressor. And that point would’ve been even stronger if the hunters were all white.

Director Ernest Dickerson is black, but maybe he didn’t want to make a movie about racism, I don’t know. I just hope that’s what he wanted and not what the studio made him do.

At the end of the movie Ice-T ends up in Seattle, which threw me for a loop. I assumed the unnamed city at the beginning was supposed to be New York or L.A. (most like L.A. I guess since that’s where Ice-T’s from). I watched the scenes again and didn’t recognize any Seattle locations. It turns out that yes, the movie was filmed in Washington State, but the Seattle scenes were filmed in Wenatchee, which is a small town all the way on the other side of the mountains in Eastern Washington, known for its apple orchards. I know Seattle isn’t exactly Gotham City but Wenatchee is so tiny compared to us, I think it’s amazing that they shot a movie there and I thought it might be somewhere in New York. They chose some good buildings and angles I guess. Good job.

SURVIVING THE GAME is, you know, a pretty good movie to watch on cable or some afternoon when you just don’t feel like watching an actual good movie. It’s not that good but it has enough elements to make it fun. Unfortunately it came out less than a year after HARD TARGET, a much more stylish and enjoyable take on MOST DANGEROUS GAME. This is such a great ensemble, but do their added powers equal Jean-Claude Van Damme standing up on a moving motorcycle + Wilford Brimley with a bow and arrow + Arnold Vosloo + Lance Henriksen playing piano + John Woo when he was still hungry? Not really.

Charles S. Dutton Ernest Dickerson F. Murray Abraham Gary Busey Ice-T John C. McGinley Rutger Hauer
This entry was posted on Tuesday, February 24th, 2009 at 2:11 pm and is filed under Action, Reviews. You can follow any responses to this entry through the RSS 2.0 feed. You can skip to the end and leave a response. Pinging is currently not allowed.

4 Responses to “Surviving the Game”