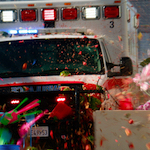 But since then I’ve watched each of Bay’s movies with more of a sense of humor about how unhinged they are, and thankfully his action has become less of a smear. The TRANSFORMERSes kinda blur together in my mind (as on screen), but checking my reviews I see it was the fourth one where he first showed he could do them with clean action. I gave it a rare 4.5 out of 5 ACR (Action Comprehensability Rating)! And I noted in my PAIN & GAIN review that having a mid-sized budget where he had to plan what shots he needed instead of shooting a giant pile of footage and chopping it into salad was a blessing. I would say the same of 13 HOURS. Finally, 6 UNDERGROUND is maybe his most entertaining mix of outlandish stupidity and incredible action spectacle. So I’ve been feeling positive about him. END_OF_DOCUMENT_TOKEN_TO_BE_REPLACED