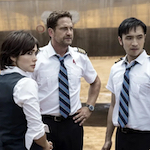 A movie like this needs some background and set up to get you interested, and PLANE does okay at that. It’s New Year’s Eve, that’s why there aren’t many people on the flight. Brodie is a single father planning to meet up with his daughter (Haleigh Hekking) after the flight. He seems nice, co-pilot Dele (Yoson An, MORTAL ENGINES) is honored to be working with him, and he makes a friendly little let’s-go-get-‘em speech to the flight crew before they begin boarding. One unusual thing about the flight is that prisoner Louis Gaspare (Mike Colter, MILLION DOLLAR BABY, CARTER) is being transported by mountie Officer Knight (Otis Winston, “Street Man,” VENOM: LET THERE BE CARNAGE). He sits in the back and they try to keep everyone from making eye contact. END_OF_DOCUMENT_TOKEN_TO_BE_REPLACED

CARTER is a new South Korean action spectacular just released on Netflix today. It’s a real runaway roller coaster, bowling ball rolling down a steep hill, adrenaline jolt type of movie, so in that spirit I’m gonna try to plow through a review and get it up real fast, like in the old days.

I’m not always on top of the South Korean cinema, but this one is from director Jung Byung-gil, whose THE VILLAINESS (2017) ranks high for me in the list of the best action movies in the last decade. CARTER is in some ways not as good, but it’s even more action-packed and technically awe-inspiring, so I absolutely recommend it.*

*To most people. Some restrictions apply, see later in review for details, ask your doctor if CARTER is right for you.

Joo Won (FATAL INTUITION) stars as Carter Lee, a guy who wakes up face down in a hotel room surrounded by gun-pointing CIA agents. He has a freshly stitched-up, cross-shaped wound on the back of his head, and there’s a trail of blood leading from under the covers across the floor. He doesn’t remember who he is or what the fuck is going on, but the agents show a video of him holding one Dr. Jung Byung-ho (Jung Jae-young, SYMPATHY FOR MR. VENGEANCE) hostage and saying to come get him in that hotel room. END_OF_DOCUMENT_TOKEN_TO_BE_REPLACED