This is Woo’s WWII movie, which makes sense because it’s about male bonding through violence, but also the evil of endless violence, and also a pretty invisible minority (the Navajo) reaching across cultural lines to achieve a common goal, much like Woo making movies in Hollywood. END_OF_DOCUMENT_TOKEN_TO_BE_REPLACED 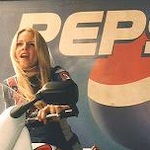 You hear that, FAST AND THE FURIOUS? The gauntlet has been thrown down. Cars suck, motorcycles rule. Or own. Or whatever it’s called now. In case FAST AND THE FURIOUS came into the movie late though, because it was out in the lobby text messaging somebody, there is a part later on where the hero says, “I live life a quarter mile at a time,” and his girlfriend says, “That’s the stupidest thing I’ve ever heard.” These movies may start some kind of deadly motorcycles vs. cars feud, but they’re both from the same producer, Neal H. Moritz. END_OF_DOCUMENT_TOKEN_TO_BE_REPLACED