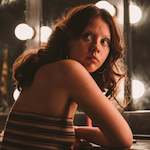 That’s from the actual MPAA rating, but it’s misleading. Though X is hardly tame, it doesn’t strike me as particularly extreme either. You gotta say this in hushed tones in these parts, but this is West’s first collaboration with A24, and I would consider him one of the pioneers of the style of 21st century slow burn horror that has become one of that company’s trademarks. I enjoyed his movies THE HOUSE OF THE DEVIL and THE INNKEEPERS, from 2009 and 2011, before A24 existed. This is in a similar vein, but being a slasher movie it’s a little more generous in its pay off, so I enjoyed it too. END_OF_DOCUMENT_TOKEN_TO_BE_REPLACED