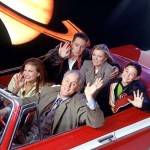 Out here? In the middle of nowhere? Where did she come from? Then Scott makes the mistake of going to buy cigarettes. While he’s gone the girl shows up again, and things start getting weirder. Basically this is the story of what happens when 3 people in Halloween masks show up at your house and try to get in, for unknown reasons.

I gotta admit man, the setup on this thing really pushes my creep-out buttons. The first half of this movie is the most genuinely scary new horror movie I’ve seen in a long time. Rural areas at night – hell, even suburbs – those places creep me out. Because nobody’s supposed to be around. If you see a stranger nearby then you know they’re up to no good.

Out in the city it’s not a problem. I got drunks stumbling around all the time, sirens going by, people laughing or yelling at each other, that’s normal at any time of night. Not a big deal. In the city I can walk around in the middle of the night and there’s not much to fear. You’re not alone, there’s always cars driving around and a few people out. They’re very polite and ask you if you “need anything.” Not that long ago a dude tried to sell me a porno VHS while I was waiting to cross a street. You generally assume people will leave you alone or won’t give you too hard of a time. If they do they’re probaly some schizo or something, they’ll back off if you ignore them.

But a small town like that, somebody shows up on your property, how you gonna get rid of them? Where would they go? Even if you got them to leave you’d be paranoid they were still out there in the trees somewhere watching you. I don’t know, I got less experience there is why it creeps me out I guess. But in my experience you look out into your backyard and if you see something bigger than a cat moving you better get a weapon.

The genius of THE STRANGERS is the simplicity and the lack of Hollywooding it up. There’s very little scoring, the lighting is not exaggeratedly gothic, there are no skipped frames or show-offy edits or digital effects. The strangers don’t have super powers (except knowing how to disappear when your head is turned), they don’t have backstories or secret identities, and they’re not exactly committing a massacre either, which makes it seem more real and therefore more unsettling. Their favorite thing is not to try to stab you but to stand there and stare at you making you think they’re gonna stab you. The scares come from things like when Scott is in his car and feels a hand brush against him.

The instant classic moment of the movie is when Liv is standing in the kitchen and you see a dude with a bag over his head appear across the room. He just stands there and she never notices him. And he appears so subtly that I didn’t even notice him at first either. That is some seriously creepy shit. A good channeling of that original HALLOWEEN spirit.

The characters are unusually respectable. Nice to see a horror movie about regular adults (even if they’re pretty young ones) going through a relatable emotional trauma that I have not seen come up in any horror movie before. Of course they’re better looking than you or I, but they seem like regular people and aren’t trying to be hip or crack wise or nothin. They don’t grate on your nerves the way many horror characters do.

So I approve of this movie, it’s worthwhile. But I do have to admit it’s mainly the first half that’s good. It doesn’t ever turn stupid or anything, but the second half sort of loses its momentum. It’s an effective and original type of scares, but it’s mostly the same sort of thing happening over and over so it gets a little repetitive. It does have the good sense to be short and sweet – even in the extended unrated cut it was something like 88 minutes. So I don’t know if it could’ve been much tighter, but I think it could’ve been a more perfectly constructed machine. It revs up a powerful engine of spookiness but then it kind of sputters and wobbles instead of just hauling ass down the freeway and/or going off a jump. (metaphor)

THE STRANGERS is very similar to the French movie ILS, where a couple is harassed and stalked by barely-seen figures, possibly wearing hoodies. That one maybe had a little better build to it, but I think maybe I like this one slightly better. Nothing against the twist ending of ILS, but the straightforwardness of this one works a little better for me, it seems less farfetched. I do have to scold the marketing people though because this is yet another movie that feels the best way to begin is by calling us morons, expecting us to believe that it’s based on a true story. I guess the “true” part is that yes, there is in fact violent crime in the world. So they loosely adapted it from that. And they have a narrated opening crawl with the names of the characters and how what exactly happened is not known, etc. It’s especially stupid because they already have a good opening with a very real sounding 911 call, a kid reporting finding the bodies of the characters we haven’t even been introduced yet. I don’t see why you need anything before that. I know, I know, I love THE TEXAS CHAIN SAW MASSACRE too, but I think we’ve done the opening narration homage enough now, fellas. Time to stop. And I demand a letter of apology for the calling me a moron thing.

slashers
This entry was posted on Tuesday, October 21st, 2008 at 11:18 am and is filed under Horror, Reviews. You can follow any responses to this entry through the RSS 2.0 feed. You can leave a response, or trackback from your own site.

2 Responses to “The Strangers”