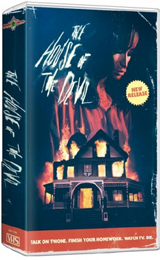 INTERNET: Yeah, probly. Have you seen this retro poster?

INTERNET: I got a boner!

ME: Who directed it – anybody?

INTERNET: I haven’t seen it, but I’m so psyched!

ME: Well, what’s this new one about?

ME: Oh. Well, not really my thing.

You know what internet, I’m a nostalgic guy. When I heard they were doing a pan and scan VHS of this movie I was impressed. It even has a Gorgon Video logo on it like FACES OF DEATH. (They should do that for MACHETE too, but with one of the big porn-sized boxes and a Super Video style painting with lots of detail but only about a 90% grasp of human anatomy.) But all the buzz surrounding this one didn’t pull me in, for two main reasons:

1. I guess I’m not really into the occult shit. Satanic cults and ouija boards and shit – those were stupid things to be scared of. I mean, what are these great satanic cult movies of the ’80s the internet is so fond of? I can’t even think of one. I guess I pictured this as being like one of those movies where people have to stay in a mansion and it turns out some weirdos in hooded robes have a bunch of candles set up in the basement so they can chant and make cuts on a 25 year old naked virgin. And I don’t really have an urge to see that subgenre revived.

2. If you said ’70s style you might’ve got me, but “’80s style horror” isn’t really at the top of my list like it is for the internet. I guess my mind jumps to late ’80s. I’m thinking post NIGHMARE ON ELM STREET 3, when everything was heavy metal and colored lights and killers who make evil puns.

Good news! All my assumptions were wrong. It’s not that type of movie, and it’s early ’80s, like between ’80 and ’82, almost looks like ’70s. My expectations might’ve been lower than yours, but I thought this was pretty good.

Samantha (Jocelin Donahue) is a college student trying to pay first and last month’s rent on her first apartment, and she doesn’t have enough money. She finds a flyer on campus for a babysitting job. After some weird incidents trying to get the job she finds herself dropped off at a remote house (which she does not realize is of the devil) where a strange gentle-voiced Tom Noonan tells her he lied and she’s actually watching after his elderly mother, but just stay downstairs and don’t bother her in her room.

The opening title card mentions satanic cults, but most of the movie is her alone in the house not knowing that’s hanging over her head. It’s very slow and deliberate, all about atmosphere and tension. Before it deals with genuine threats to her safety it milks the discomfort of her being in a stranger’s house and you not wanting her to wake up the unseen old lady. Instead of “don’t go in the room!” somebody might yell “be more quiet so you don’t wake her up!” to the screen.

Although the plot’s not at all similar, the look and tone reminded me most of BLACK CHRISTMAS. The 1980 fashion and cinematography is accurate enough that I’m positive people who catch it on cable will believe that’s when it was made. I was actually a little disappointed to see what Donahue looked like with modern hair, it was like seeing Godzilla with the mask off. But the only part of the movie that really ruins the illusion is when Greta Gerwig’s character says “Yo, check it.” No white college girl said that in the early ’80s. But I can see why it would be important to get that in there, I guess. (?)

For me the enjoyment is in the journey, not the destination. Or, it’s in the housesitting, not the going home. But I do like what happens at the end. The threat is not as big as in most horror movies. The bad guys are kind of pathetic. I like that. Hell, that’s authenticity. If this plays like a forgotten early ’80s horror movie, this is why it was forgotten.

This movie’s already been debated heavily in another comments thread, and you guys had more to say about it than I did. So I’ll end here. It’s a real slow burn with a small pay off, nothing I’ll be revisiting too often. But a small pleasure is still a pleasure.

Also there’s a character who I think looks like Eric Stoltz in MASK, but I couldn’t find a photo for comparison.

Ti West Tom Noonan
This entry was posted on Thursday, February 11th, 2010 at 1:39 am and is filed under Horror, Reviews. You can follow any responses to this entry through the RSS 2.0 feed. You can leave a response, or trackback from your own site.

94 Responses to “House of the Devil”