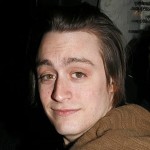 You know my theory about Culkins. They squirt ’em out on a conveyor belt somewhere and sell ’em cheap to filmatists. I’m not sure they even have separate identities, they probaly just call them “Rory” when they’re young and “Kieran” when they’re a teen and “Macaulay” when they quit acting and start going to clubs. If you buy the media hype about them being actual kids, then Kieran must be the most successful of the group because he’s doing legitmate acting roles and he must be 16 or so. END_OF_DOCUMENT_TOKEN_TO_BE_REPLACED