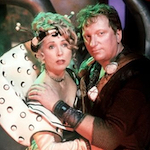 The cartoonish super villain who sets the plot in motion is played by Jon Lovitz, who we last saw in A LEAGUE OF THEIR OWN. He’s the sleazy tyrannical ruler of the planet Spengo and his name is Emperor Todd Spengo. I don’t know why it’s funny for a character like that to be named Todd, but it is. It’s one of I believe two things that made me laugh in this movie. The other is a couple minutes in when Emperor Todd Spengo decides to postpone destroying Earth with his “Super Death Ray Laser” because through his telescope he spots the most beautiful woman he’s ever seen – Marge Nelson (Teri Garr, THE PLAYER) very awkwardly doing aerobics in an ugly sweatsuit. END_OF_DOCUMENT_TOKEN_TO_BE_REPLACED 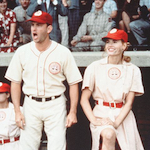 Geena Davis (FLETCH) and Lori Petty (CADILLAC MAN) star as Dottie Hinson and Kit Keller, small town Oregon sisters who run a dairy and play catcher and pitcher on a softball team. One day a scout named Ernie Capadino (Jon Lovitz*, THREE AMIGOS) attends a game and wants Dottie to try out for the A.A.G.P.B.L. She’s happy with her life and uninterested, but agrees to go if he’ll give Kit a shot too. END_OF_DOCUMENT_TOKEN_TO_BE_REPLACED 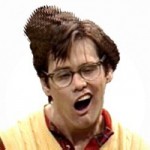 This is kind of a misleading title because really it is about ugly drooling guys sitting around in their underwear getting drunk and wishing they could have violent sex with neighbors that won’t even talk to them and that kind of business. Which, in my opinion, is not all that happy. You know how Hollywood usually pretties everybody up? Like even the criminal element in motion pictures, most of the time they are a LOT better looking than anybody I ever worked with. And the same goes for stories, if it’s a true story chances are they’re gonna streamline it, water it down a little, gussy it up a little, make it look nice “for dramatic purposes.” But the truth is there are a lot of ugly motherfuckers in this world, and they do a lot of ugly things, like some of them call up women in the phone book and jack off while they talk about “I’m gonna fuck you so hard you’re gonna come out your ears” and what not, and coincidentally that is exactly what this picture is about, Happiness. END_OF_DOCUMENT_TOKEN_TO_BE_REPLACED