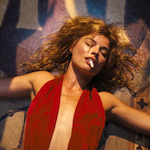 There’s a surprising amount of shitting, pissing, and puking in BABYLON, the bawdy fictionalized-early-Hollywood period comedy-drama from writer/director Damien Chazelle (writer of THE LAST EXORCISM PART II). It opens with hard-working studio assistant Manny Torres (Diego Calva, Narcos: Mexico) trying to impress his bosses by helping organize a crazy mansion party/orgy, and he has to figure out how the fuck to get a rented elephant up a hill. While pushing the way-too-small truck, the elephant gets spooked, and the wrangler (Jimmy Ortega, “Sicario #1,” SABOTAGE) is graphically showered with feces from above.

I appreciate that it’s a surprisingly JACKASS way to kick off a movie some had purported to be Oscar bait, but it’s narratively odd. It must be intended to establish the lowest-of-the-low start to Manny’s career in the movie industry, but he doesn’t seem to get any on him, so it kinda seems like stolen valor to me. Shouldn’t the wrangler be the one getting the meteoric rise? Oh well. Maybe that’s the sequel.

This party scene could be a short film unto itself, and it introduces each of the characters whose ups and downs we’ll be following throughout the movie, chief among them Nellie LaRoy (Margot Robbie, THE LEGEND OF TARZAN), an aspiring starlet from New Jersey who’s not on the guest list, but Manny takes pity on her and sneaks her in. She peer pressures him into doing a line with her and they have a vulnerable moment that will connect them for life, sharing their Hollywood aspirations. END_OF_DOCUMENT_TOKEN_TO_BE_REPLACED