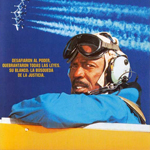 The first thing you need to know about ON THE ATTACK: it’s the IRON EAGLE movie that sources its pilot team from a reform school. So it’s got the DREAM WARRIORS teen underdog thing going for it. END_OF_DOCUMENT_TOKEN_TO_BE_REPLACED