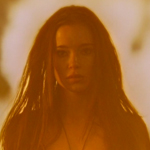 I guess technically this is a sequel to the book, not to the movie, because they have flashbacks to scenes from the movie and they’re reshot with Skye McCole Bartusiak (24) as Charlie, Aaron Radl as her dad and Karrie Combs (BRIDE OF KILLER NERD) as her mom. But mainly we have Charlie played by Marguerite Moreau (the MIGHTY DUCKS trilogy, FREE WILLY 2, WET HOT AMERICAN SUMMER). She’s all grown up and keeps a fire extinguisher under her bed for those nights when bad dreams set her bed ablaze. Living under a fake identity, she works at the Millington College academic archive, where she’s trying to uncover information about her dead parents and the experiment that started her firestarting.

Meanwhile there’s this insurance investigator type guy named Vincent (Danny Nucci, Jack’s buddy Fabrizio in TITANIC) working for a company with the ominously non-descriptive name of Systems Operations. He thinks his job is finding people for a class action lawsuit settlement. He’s taking his third shot at the cold case of Charlie McGee and unknowingly befriends her while looking over the files about the medical experiments her parents were involved in.

It turns out George C. Scott’s psychotic assassin character John Rainbird is still alive, but played by Malcolm McDowell. Half of his face is burned from his last it-turns-out-not-fatal encounter with Charlie (when he confessed his love to her), and he’s been trying to find her all these years. 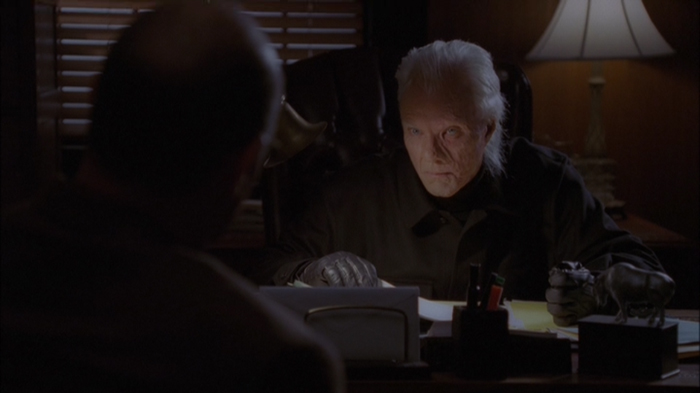 These days he’s in a new job. He’s sort of an evil Professor X running a small school for kids with supernatural abilities. Like with Charlie in part 1 he pretends to be a nice friendly adult buddy, but most of them are little assholes anyway who want their shot at the title with the legendary Charlie when he tracks her down.

But before any zippers come down she says “I gotta go!” and runs away, leaving him with an angry boner and calling her a bitch. She leans against a wall in an alley, squeezing her legs together with kind of an orgasmic smile on her face as flames spread around her. This raises some questions that are not further explored in the subsequent two hours. Does getting off cause the fire, or is the fire what she gets off on? Did she just go as far as she could without starting a fire, or did she only do it to get to the place of fire-climax?

Much later, when she has sex with Vincent and is afraid of burning him alive, it doesn’t really seem like this same aggressive parking lot sex person. But I guess people are complicated.

In the second half Charlie encounters James Richardson (Dennis Hopper), a psychic who says he knew her parents in the past and knows her future in the present. He seems like a nice guy, but on the other hand he’s Dennis Hopper. Who knows?

It’s all leading to the traditional CARRIE/FIRESTARTER walking-through-town-using-powers-to-fucking-destroy-everything climax, but it’s not her causing the mayhem, it’s a bunch of children who also have powers and are blowing up banks and throwing car doors through ice cream shop windows. Earlier it was funny to see an adult woman using her powers against a bunch of little boys, but (SPOILERS) unfortunately she doesn’t get to barbecue them all. She does bring Rainbird’s once-pedophilic obsession with her to yucky conclusion by kissing him in order to burn him into BLADE style CGI ashes. Even weirder and more uncomfortable is the way she embraces the power mad little boy who grabs her to try to leech her powers. 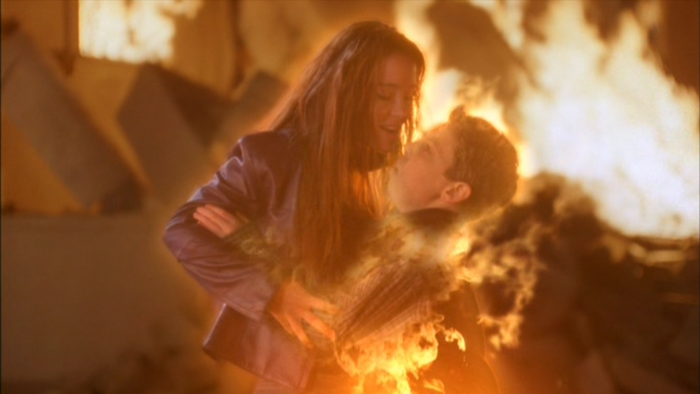 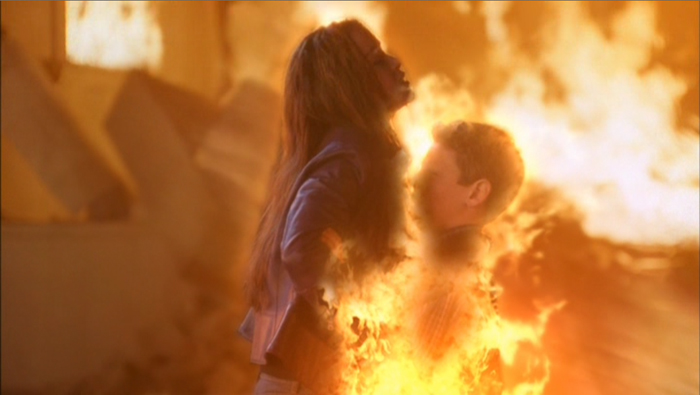 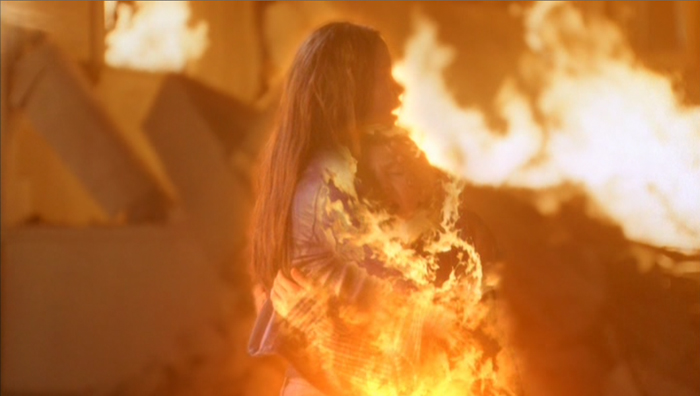 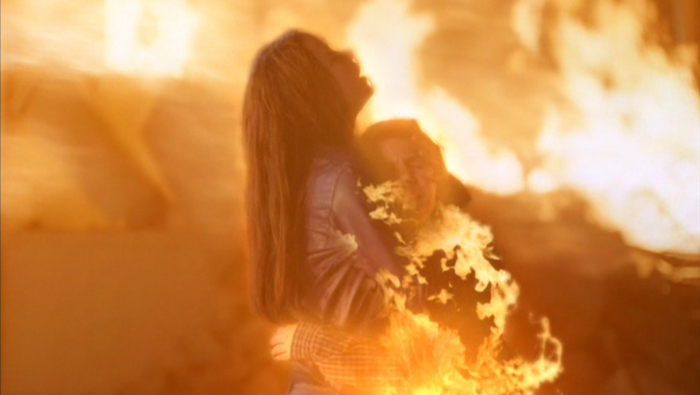 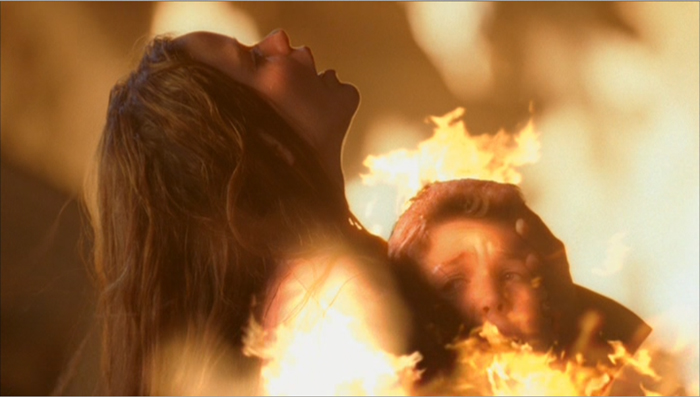 “Okay, this is the scene where you burn a little boy to death, so can you do it real sexy?” I don’t know what’s going on in this movie’s pants, but I’m pretty sure I’m against it.

Being made for TV in 2002 I don’t have to tell you that it relies on many unconvincing digital effects. But to be fair there are also some legit fire stunts. 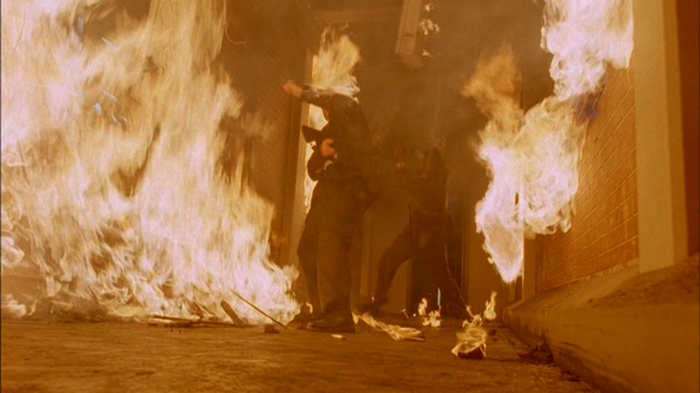 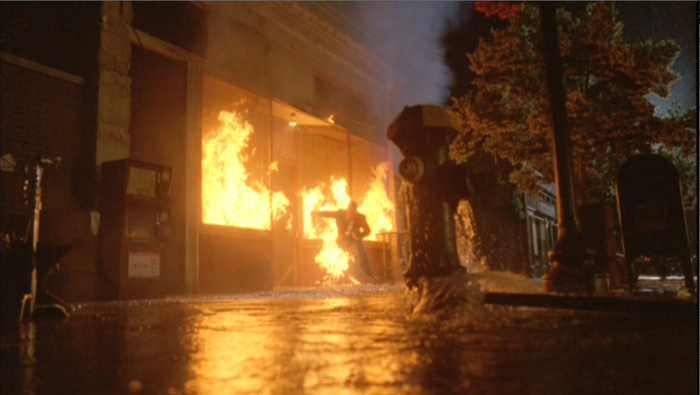 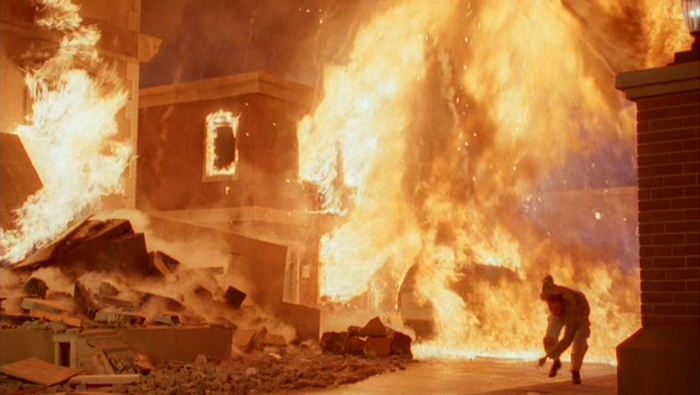 The writer was Philip Eisner, whose other two credits are EVENT HORIZON and MUTANT CHRONICLES. Director Robert Iscove has mostly done TV movies such as the version of Rogers and Hammerstein’s Cinderella that starred Brandy, or later on the unauthorized TV movie biopic of the cast of Diff’rent Strokes. But a few years before this he did the beloved-only-by-people-who-saw-it-at-the-exact-right-age theatrically released teen movie SHE’S ALL THAT and the Freddie Prinze Jr./Claire Forlani/Jason Biggs movie BOYS AND GIRLS. His followup to this was FROM JUSTIN TO KELLY.

In a way this reminds me of the CARRIE TV movie. I don’t think it’s good, but as a completist it’s interesting to see the ideas they came up with. Rainbird having found other powered children and using them against Charlie seems to make sense. And the idea of corporate bureaucrats locating the subjects of the experiment, unaware that they will then be killed by assassins, is a pretty good 21st century update of King’s original paranoid scenario.

In the end, Charlie rides off alone in a Greyhound, cursed to keep traveling around, trying to stay out of trouble. I wonder if this, like that version of CARRIE, was intended as a pilot? It seems like this world could work for an ongoing series. As recently as two years ago a different group of people were developing a TV series meant for TNT called The Shop. It would’ve had Charlie teaming with a former agent of The Shop to shut them down. I would’ve tried watching that if they had made it.

You know what would make all of these more tolerable though? Tangerine Dream.

Danny Nucci Dennis Hopper made-for-TV-sequels Malcolm McDowell Marguerite Moreau mini-series Philip Eisner Robert Iscove Skye McCole Bartusiak Stephen King
This entry was posted on Tuesday, September 13th, 2016 at 10:43 am and is filed under Horror, Reviews, Science Fiction and Space Shit. You can follow any responses to this entry through the RSS 2.0 feed. You can skip to the end and leave a response. Pinging is currently not allowed.