Alot of the movie, especially the first half hour or so, just made me sad. Marvin’s age is really showing (this was his next to last movie) and he just doesn’t seem like he’s into it at all. They make poor Lee and Ernest rehash the whole Borgnine-pitching-the-mission sequence and the Marvin-recruiting-the-convicts one and they even use whole chunks and paragraphs of the exact same dialogue as in the original. Then Marvin will say things like, “That sounds familiar.” 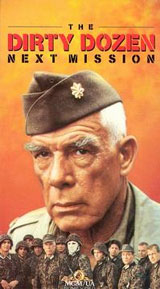 This was 1985, when plenty of people had VCRs, but I guess maybe they still figured you hadn’t seen THE DIRTY DOZEN in a long time, and by exactly redoing it but with worse acting and camerawork they would make you would think “ah, what a pleasant reminder of yesteryear!” But if you watch the two back-to-back like I did I’m pretty sure you’ll agree that there’s nothing pleasant about it.

Also there’s a part where they re-use an 18 year old shot of Marvin driving up to a building. It’s so obviously not from the same film stock it kind of reminds me of on a sitcom when they cut to an exterior shot of a city to pretend this isn’t all shot on video on a stage in front of an audience. Come on man, that footage is old enough to vote. Just rent a fuckin jeep and re-do it.

THE NEXT MISSION is maybe an hour shorter than THE PREVIOUS MISSION, so they skip over the rivalry and war games and go straight to the mission, which involves the takeover of a train and the shooting of a Nazi general who might be planning to assassinate Hitler. Once it gets more into the specific preparations and the mission itself it becomes more enjoyable because it’s not exactly the same as before, and that’s probaly why Marvin starts to get more lively and enthused. He does the numbering and rhyming for all the stages of his plan like in part 1, but otherwise it’s semi-new material. For example it introduces the idea of him getting the Dozen’s cooperation by telling them there’s gold on the train. I’m not sure what book or movie started that one. They used it in NAM ANGELS though.

The big moment is when the sniper gets the target in his sights, but Hitler is there too so he’s tempted to kill him instead. Lee Marvin has to talk him out of it. That’s a dilemma usually reserved for time travelers who have the chance to stop the Holocaust but don’t want to fuck up the future in some unforeseen butterfly effect type of way, like there was no WWII but super-intelligent Yetis now control all of Asia and Europe or that kind of thing. This has nothing to do with that. The thinking, as explained by Borgnine during a golf game, is that Hitler’s incompetence will end the war soon, but if he dies now this general would take command and the war would stretch on for years. And I mean how many more dozens is Lee Marvin gonna want to train?  Shit, just one year and he’ll be 99 years old at the rate he’s aging. This war needs over with.

Landham doesn’t have much to do, Wahl plays a racist dick, and whoever is playing the Savalas crazy type is a horrible actor. But by the end I was a little more involved in it, so I kind of liked seeing how it ended up. In fact, the highlight of the movie is the very end, when the survivors crash land a stolen Nazi plane, still wearing Nazi uniforms, and an English farmer tries to take them prisoner. Reisman uses his American accent to tell the farmer he’s done a good job, puts his arm around him and heads for the nearest pub to buy him a pint.

Since this was made for TV you could compare it to DTV. They wanted a sequel but not enough to pay for a real one. But actually it was higher profile than DTV because back then there weren’t as many channels, so I’d bet more people saw this than picked up CARLITO’S WAY: RISE TO POWER. I don’t know if this was made because of all the Vietnam-related mission movies of the time. Same year as RAMBO: FIRST BLOOD PART II, but I’d guess it was a coincidence. The director, Andrew V. McLaglen, actually did the men-on-a-mission movie THE DEVIL’S BRIGADE back in ’68 and THE WILD GEESE in ’78. He also did that Joe Don Baker movie MITCHELL that the Mystery Science nerds like to make fun of, and after this one he did another TV sequel, RETURN FROM THE RIVER KWAI. The writer, Michael Kane (no relation), wrote SOUTHERN COMFORT. And JAWS 3-D. And SMOKEY AND THE BANDIT II.

The completist in me enjoyed seeing this, but I gotta tell you the quality is somewhere between the original DIRTY DOZEN and the average A-TEAM episode. And it kind of bummed me out to see Marvin getting decrepit. He had grey hair for most (all?) of his acting career, so you always think of him as a capable old guy. Here he’s finally showing his age.

Luckily it’s made for TV so it doesn’t count. On second thought it’s admirably honest to use this as a mere bonus feature, and maybe even good marketing. Remember when they put Cronenberg’s THE FLY on DVD as a double feature with THE FLY II? Good value, but I think people were happy when they later released them separately. They’d rather pay more to not have THE FLY II written on the cover. Same goes for THE NEXT MISSION. Just check the bonus disc if you’re interested.

Ernest Borgnine Ken Wahl Lee Marvin made-for-TV-sequels Sonny Landham
This entry was posted on Thursday, September 10th, 2009 at 1:34 pm and is filed under Action, Reviews, War. You can follow any responses to this entry through the RSS 2.0 feed. You can skip to the end and leave a response. Pinging is currently not allowed.

23 Responses to “Dirty Dozen: The Next Mission”