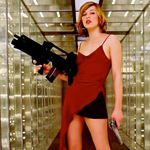 So it was interesting to watch RESIDENT EVIL again in 2016, remembering that I hated it when it came out, but not much remembering why (here’s the dumb review I wrote almost 15 years ago). At the very least there’s a good opening sequence that I had no memory of. Employees of the Umbrella Corporation in Raccoon City, Wherever arrive one morning at their underground lab work place known as “The Hive,” having no idea that the shit is floating mid-air in a cool MATRIX style slo-mo flight toward the fan, because somebody broke open a vial of the deadly experimental T-virus. END_OF_DOCUMENT_TOKEN_TO_BE_REPLACED

Oh wait, I was thinking of can-you-fuck-your-friend-all-the-time-and-not-fall-in-love romantic comedies. That’s the more common one. The civil war veteran on Mars deal is not that big of a genre this year, and this new (partly) live action take from Disney might be the last one. It’s not shaping up to be the smash hit required to make back its big budget, and the box office trainspotters are already giggling and high-fiving each other as they dig it a shallow grave in an unused lot behind Space Mountain. That’s too bad, ’cause it’s a hell of alot of fun.
END_OF_DOCUMENT_TOKEN_TO_BE_REPLACED

SOLOMON KANE (James Purefoy) is a cruel bastard of a treasure hunter. I’d say he’s like a meaner Indiana Jones except in the opening scene I honestly thought he was the bad guy. He fights his way into some kind of ancient temple and even kills demons that pop out of the mirrors. But then he gets locked in a chamber with a flaming-sword-wielding-gentleman who introduces himself as “The Devil’s Reaper.” And this is when Solomon Kane realizes he’s reached rock bottom. For Richard Pryor it was running down the street on fire, alot of guys it’s waking up with no pants in an unfamiliar backyard, crawling home with no keys, having to break in, only to discover the place trashed and the wife’s closet empty, things like that. This guy it’s when the Devil’s Reaper shows up and tries to literally drag him to Hell.
END_OF_DOCUMENT_TOKEN_TO_BE_REPLACED