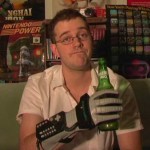 Okay so I am not really backing my claim that the plot isn’t that bad. Well it turns out that before she lost her memory (I never understood how) she was undercover, living in the mansion to guard the secret entrance to this underground facility “the hive” where a realistically sinister corporation performs illegal genetic experiments. But somebody let loose a deadly virus, the computer put the place in lockdown, and all the scientists and dogs inside were turned into zombies. Also some monster comes out at the end. 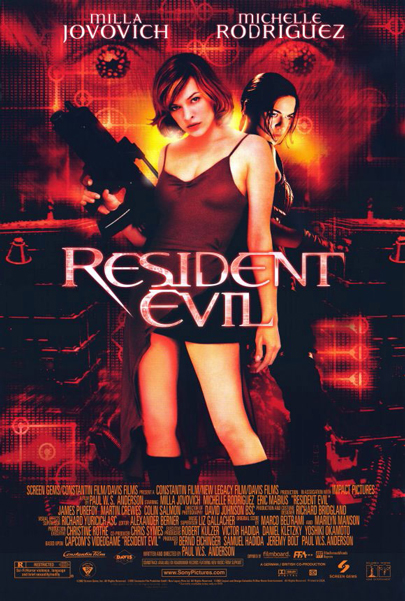 Where the not that bad part comes in is that while the team of toughs (including 2000 Outlaw Award Winner Michelle Rodriguez) try to contain the virus, the computer senses that they will be infected and spread the virus to the city, so it contains them. And then Milla starts to get back bits of her memory which make her slowly piece together who released the virus and why.

I mean I’m not claiming its great but it’s a structure that could’ve been interesting with skilled filmatism. Instead they hired the dude that did “Mortal Kombat” and “Event Horizons” and apparently asked him if there was anyway he could make something alot worse. There is no tension because you don’t care about the characters and things are not staged to give you a sense of geography, of how fucked these people are when the doors close on them.

It just doesn’t feel like a real movie. I like looking at Milla and Michelle Rodriguez is pretty cool, even when she has nothing at all to do. But otherwise none of the actors have any presence. They even got that idiot from The Crow Part 3 in one of the lead roles. The sets are mostly storage closets with pipes. If this was shot in hollywood it’s an amazing facsimile of Canada. If it was shot with a hollywood budget, it sure looks like Steve Norrington’s “Death Machine” on less imagination.

At first I thought the computer was going to be the only interesting character. It manifests itself as a hologram of a little british girl. But the idea of a computer that makes snide comments doesn’t hold up. I guess it kinda worked in Knight Rider, but that was a long time ago.

All the attempted scares are cheats. There is a part where Milla is being chased by mutant dobermans. The lab goes totally silent – until the camera changes angles to reveal the dogs behind her. Suddenly they are panting and growling up a storm. This pattern is repeated several times within that sequence, that something is dead silent until it is revealed and suddenly it can’t contain itself.

There is exactly one shot that is worth watching in this movie and it was already in the trailer. Milla sees one of the mutant dobermans jumping through a window. So she turns around, runs up the wall, spins back around and kung fu kicks the dog in the head, mid-air. I must admit I had to rewind that part. If only the rest of the movie had been that stupid it would’ve been easier to sit through.

When my friend loaned me the screener of this picture, he mentioned the dogkicking shot, and one where you see the side of one of Milla’s boobs. I was surprised to find that those really were the only two memorable things about the movie.

The best thing I can say about this one is that it didn’t seem as long as Final Fantasy.

Milla Jovovich Paul W.S. Anderson video games zombies
This entry was posted on Friday, March 15th, 2002 at 10:00 am and is filed under Action, Horror, Reviews, Science Fiction and Space Shit, Videogame. You can follow any responses to this entry through the RSS 2.0 feed. You can skip to the end and leave a response. Pinging is currently not allowed.