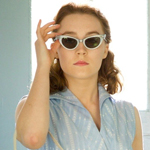 Saoirse (pronounced sur-shuh) Ronan plays Eilis (pronounced AY-lish) Lacey, a young woman who works in a shop in a small town in Ireland in 1952 (pronounced nyn-teen-fiff-tee-too). But she doesn’t get paid much and  people are starving and her older sister Rose (Fiona Glascott, RESIDENT EVIL) arranges for her to go to the U.S. where there might be better opportunities. A priest (Jim Broadbent, SUPERMAN IV) sets her up with a home at a boarding house, a job at a department store and even night classes in bookkeeping at a college.
END_OF_DOCUMENT_TOKEN_TO_BE_REPLACED