It’s not supernatural, and maybe not even horror, but the mood somehow does remind me of NEAR DARK. Lou Diamond Phillips (RENEGADES) plays Jack (last name Ketchum, apparently!), who’s introduced in his car, drifting to the next town after – as he explains in voiceover narration – falling for a sheriff’s daughter. Too dangerous. But before he can find a new place to stay he drives his truck off the road into a forest and wakes up the captive of a paranoid old redneck named Lyle (Charles Dance, LAST ACTION HERO) and his timid wife Willie (Mia Sara, TIMECOP), who I assumed at first was his daughter. They live in an isolated home in some North Carolina woods that’s somewhere between a hermit’s shack and a luxury resort lodge. It looks cold and some of it is built out of rusty car doors, but it’s huge, with various buildings and facilities. END_OF_DOCUMENT_TOKEN_TO_BE_REPLACED 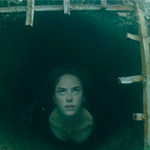 When Haley (Kaya Scodelario, CLASH OF THE TITANS) gets out of the opening credits swimming practice, the hurricane is already approaching. When she tracks down her not-answering-his-phone dad (Barry Pepper, THE THREE BURIALS OF MELQUIADES ESTRADA) in the crawlspace under her childhood home, he has already been bitten by a huge alligator. I think only one sentence of dialogue is spent on speculating how the gators got in there (later confirmed visually), and not one word on why they’re so big. It takes place over one day, it’s all over in 87 minutes and it concludes with a freeze frame. No wind-down, epilogue or sequel tease. That’ll do, pig. END_OF_DOCUMENT_TOKEN_TO_BE_REPLACED