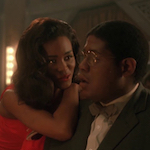 It becomes harder to do each year, as there become fewer stretches that I haven’t already mined (or, in the case of anything in this century, that I wasn’t writing about at the time). Fortunately this year we’ve hit the 30th anniversary of a crop of movies from what I think is kind of an interesting transitional period with some cultural shifts in progress. It’s a summer with some fresh territory for me and although I’ve already reviewed what I consider its two most important releases, they’re both monumental enough to justify writing up more than once. END_OF_DOCUMENT_TOKEN_TO_BE_REPLACED He just goes along with the bullshit like people in the real world do. He treats the #1 sitcom star – who wears a funny bat-shaped hat and mugs up a storm while being swatted at by white people – as a V.I.P. Even in a daydream about being personally boycotted by the NAACP for playing Jive Time Jimmy he’s asked if he makes “those faces” (minstrel show type mugging) in bed, and he answers innocently, “Uh, sometimes.” It works as satire because he doesn’t know any better.  END_OF_DOCUMENT_TOKEN_TO_BE_REPLACED