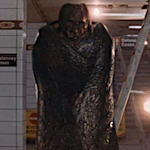 Three years later, Strickler’s disease has been wiped out, the two doctors are married, and everything seems fine, except weird shit is happening under Manhattan. A mysterious vagrant type guy drags a priest underground, and only an autistic kid named Chuy (Alexander Goodwin) witnesses it. Chuy’s guardian Manny (Giancarlo Giannini, BLACK BELLY OF THE TARANTULA) is a shoe shiner, so the kid has become affixed on people’s footwear, and for some reason he calls this attacker “Mr. Funny Shoes.” I don’t know why, but that’s one of my favorite details in the movie. END_OF_DOCUMENT_TOKEN_TO_BE_REPLACED