With AMISTAD Spielberg brings his historical dramas closer to home, dealing with slavery in America through the story of an unusual court case. The case deals with a group of Africans captured as slaves and transported on a schooner called La Amistad. Cinque (Djimon Hounsou) leads an uprising and takes control of the ship, but they end up taken into custody along American shores.

Like Jamie in EMPIRE OF THE SUN these are innocent people trapped in a complex set of conflicting rules put in place to explain an inherently wicked practice – society’s fancy way of convincing themselves that barbarism is civilized. Even the heroic abolitionist lawyers who defend the Africans (led by Matthew McConaughey as an 1800s version of the John Grisham brilliant underdog lawyer) are forced to discuss these human beings as “property,” looking through laws about possessions, slaves, treaties, all that shit. It’s like they’re not even people, it’s like they found a shipment of cigarettes or something and gotta decide who gets to keep them. And while these white people try to straighten that out the Africans have to sit there in the court room, not having any clue what’s going on because of the language barrier.

We were born just a hundred and change years later, and it’s unfathomable to us. It’s like fucking let them go. Give them free. But to the characters in the movie it’s a complicated case, an interesting debate. They enjoy arguing the minutia of it. The international slave trade is banned, but people born to slaves are still considered slaves. So they gotta argue about where these people were born to prove whether they’re free or if not who “owns” them. Is it the two surviving white guys on the boat, the 11 year-old Queen of Spain (Anna Paquin), the Americans who “salvaged” the boat?

Even if they’re free are they killers and mutineers? If they do let them go, is that gonna be that, or do they lock up the two guys for being slavers? These were all big serious arguments back then, and then the Van Beuren administration makes matters worse by trying to influence and interfere with the case in order to appease the li’l Queen and the South. Fuckin Van Beuren, man.

It’s a terrifying idea that this bratty kid, because she’s inherited the mantle of Queen by the laws and traditions of one country, has a say in the human rights of people all around the world. It’s kind of like now days how some of the world leaders gotta bite their tongue and try to be nice to the crazy dictators so they can try to negotiate deals and shit. Here it’s a little girl, shown jumping up and down on her bed in one part. 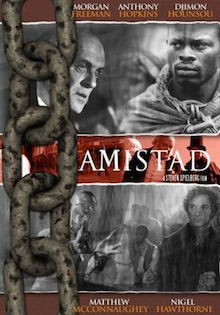 Since it’s mainly a court room drama AMISTAD isn’t nearly as exciting as SCHINDLER’S LIST. It’s powered mostly by the interesting situation and the Oscary performances by a cast of then and future A-listers, not as much on Spielberg’s potent filmatism. But a couple times the script by David Franzoni (JUMPIN’ JACK FLASH) does drop the speechifying and allow for classic image-based sequences that take place overseas. The opening Amistad uprising – kicked off by Cinque’s bloody fingers managing to pull a nail out of a plank on the ship – weirdly reminded me of the unseen first dinosaur in JURASSIC PARK. It’s dark and chaotic, an unexpected nightmare, not an action sequence. Later, the crisp Spielberg visual storytelling comes into play for a horrifying flashback from Cinque’s capture to his near-escape. As harrowing as the whole thing is, it also makes him seem like a great action hero. It’s a history lesson but it’s also a little CONAN. I not only wanted to see this guy escape, I wanted him to go on and have other adventures. In fact, that could be a great adventure movie, whether history-based or entirely fictional: a rousing epic about a badass that leads a slave uprising. I understand why people choose the Serious approach for this horrible era of our history, but if you can have a pulpy action hero who fights Nazis or the Klan or whatever we could use more that fight against slavers. (I guess/hope that’s sort of what Tarantino’s doing with his next one.)

Anyway, that great flashback scene starts as Cinque telling the story to the lawyers through an interpreter (Chiwetel Ejiofor!), when it ends it’s McConaughey telling it to the court. Economical storytelling for a movie that’s mostly dialogue.

Morgan Freeman plays Theodore Joadson, a colleague of McConaughey’s lawyer character. Of course he’s always good, and his presence creates a contrast between the slaves and the educated free black men that also existed at that time, and got to wear top hats and shit. It’s an interesting tension between Joadson and the people who are worse off than him, and also between him and the white men (including his friends) who can’t understand racism like he can. But at times he feels kind of like the token African-American character put in there just so it won’t seem like as much of an “Isn’t It Great What White People Did To Stop Racism?” type movie like THE HELP. He doesn’t get a huge amount to do, and since he’s a fictional character sometimes when he does have something to do (like finding a Mende translator in a clever way) it’s taking away credit from the people who really did it.

Anthony Hopkins is good and show-offy as John Quincy Adams, the weirdo ex-president, abolitionist and lawyer who McConaughey convinces to step out of his father’s shadow by getting involved in the case. His part is like Orson Welles in COMPULSION – mostly an epic court room speech. But the obvious acting highlight is Hounsou in his first major role. He doesn’t speak or understand English, so the whole movie is a struggle to communicate. The actors playing the Africans all do a good job of looking like they have no idea what’s being said, but he’s the one that figures out 3 words and tries to use them. He’s a compelling character because he’s a brave warrior in battle, he’s smart when he ends up in court, but he’s not some perfect noble hero. He can be belligerent. When he flips out you can see why these white people would be afraid of him. Better hope he doesn’t find a nail.

If you think about it Cinque is McConaughey’s E.T. He takes him in, dresses him up, draws a map in the dirt to try to ask him where he’s from. Everybody has to come together to save him from government custody and send him home. At the end he’s learned a couple words for a farewell message. I only wish he used some tradition African salve to heal a cut, and that Morgan Freeman said he didn’t like his feet.

(It should be noted that Hopkins’s Adams looks and moves more like E.T. than Cinque does, and shows a strong interest in botany.)

There’s a subplot about one of the Africans looking through a Bible all the time. He can’t read it but he likes the pictures and comes up with an interpretation of the story of Jesus and how it relates to their situation. He even looks up at the masts of boats and sees crosses. I wonder if he just sees a symbol of salvation or if he’s thinking that being chained up on a slave ship is like being nailed to a cross. The amount of stuff he’s able to figure out from the pictures is far-fetched, but it’s an interesting explanation for Christianity replacing the previous religions of many Africans. In fact, it wouldn’t seem so weird if it was reversed, a white man stranded in Africa deciding to learn and practice their religion. It would seem pretty enlightened, it wouldn’t seem like a sad denial of his own culture. I think that sort of happens in THE PHANTOM for example.

I always feel a little uncomfortable with these type of stories, it’s always gotta be the white people as the main characters. Good job, white people. But (like SCHINDLER’S LIST and its Jew-saving Nazi party member) it is an interesting episode in history that I never heard of before, and a legitimate example of people on the wrong side doing an extraordinary thing to help the right side. Cinque is a very memorable character with both physical and mental strength and it’s nice (even funny at times) to see the exchange between these two cultures. This might be Spielberg’s weakest historical drama, but it’s still a good and unique one.

Anna Paquin Anthony Hopkins Chiwetel Ejiofor court room drama Djimon Hounsou Matthew McConaughey Morgan Freeman slavery Steven Spielberg
This entry was posted on Thursday, January 26th, 2012 at 2:36 pm and is filed under Drama, Reviews. You can follow any responses to this entry through the RSS 2.0 feed. You can skip to the end and leave a response. Pinging is currently not allowed.